There’s no ISIS or al-Qaeda in the Damascus suburb of Daraya, but the Syrian regime insists it will continue to bomb and besiege it, risking ceasefire deal.

A Damascus suburb long targeted by regime and Russian warplanes and rockets has emerged as a key stumbling block in international efforts to impose a cessation of hostilities in Syria this weekend. 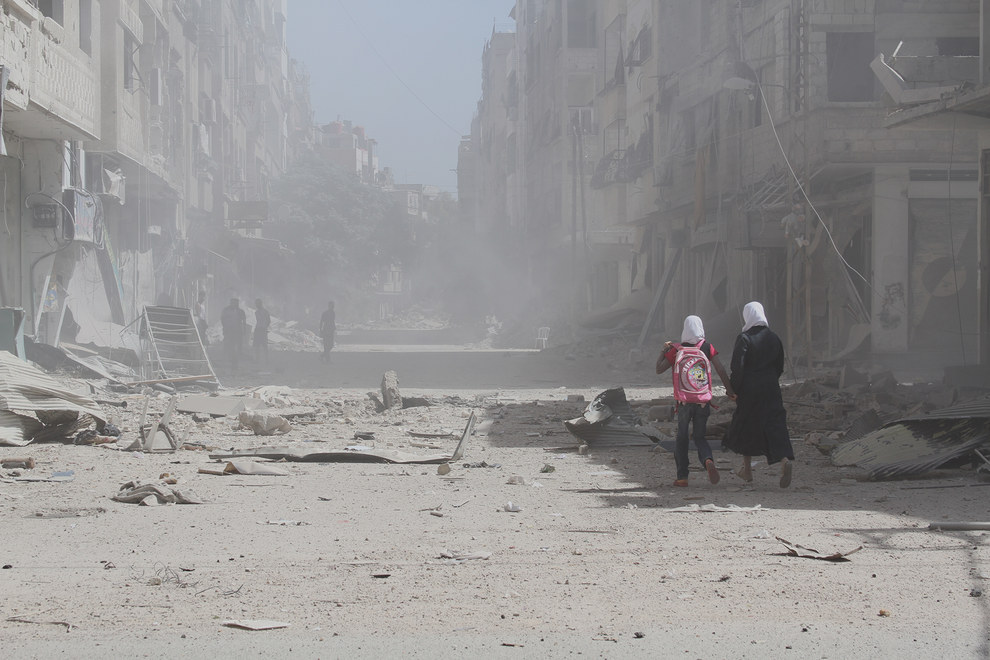 Day and night, Russian and Syrian warplanes pound the besieged Damascus suburb of Daraya with barrel bombs and rockets, killing more than 2,000 people, and destroying or damaging nearly all the buildings in what was once a bustling city of 200,000, residents inside the city told BuzzFeed News. The Syrian regime says that perhaps a fifth of the city is controlled by Jabhat al-Nusra, which is excluded from the terms of the ceasefire deal brokered by the U.S. and Russia and to begin on Saturday. The regime has refused to include it under the terms of ongoing negotiations.

But experts on Syria and residents inside the city insist there is no Jabhat al-Nusra, al-Qaeda’s arm in Syria. Nor has ISIS managed to carve out any presence in the city, which boasts a library used by rebels and residents. Leaders of the powerful Southern Front, a coalition of Free Syrian Army Rebel groups, have warned they will refuse to abide by any ceasefire unless Daraya is included under its terms.

“No ceasefire without Daraya, our … stronghold in west Damascus,” Issam al-Reis, a spokesman for the Free Syrian Army’s southern front, said in a tweet. “[It is] over 200 km away from ISIS and no Nusra presence there. It must be included.”

The bombs over Daraya never stop. They strike when the sun rises, during the day when the children should be playing in the streets or heading home from school. They detonate when the adults scour markets for for dinner. They strike as the people of Daraya huddle in basements and underground holes, as they seek to fall asleep, and then all through the dead of night.

Residents here have been besieged for nearly 1,200 days and have little access to electricity, heating oil, drinking water, and housing. About 30 of the city’s 40 mosques have been destroyed.

“After sunset, most civilians just go down to the basements and spend all their nights there,” said Shadi Matar, 26, an official of the Daraya Local Council. 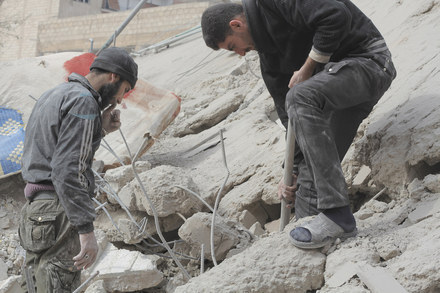 On some days, Daraya is struck 50 times with barrel bombs, dropped by helicopters or from Russian planes launched from the nearby military airbase and often targeting schools, mosques, and apartment houses.

A documentation center run by seven volunteers has tallied 6,025 barrel bombs dropped on the city since the beginning of Syria’s civil conflict, with 765 in January alone — an average of 25 per day. Nearly 2,114 people have been killed in the bombings, according to Abu Omar, the nom de guerre of a member of the documentation center. And nearly 98% of the buildings in the city have been damaged or destroyed, with devastating attacks by so-called elephant rockets, which screech horrifically as they are launched and hit their targets.

“The regime is trying by all means necessary to break Daraya’s resistance and to take over the city in any way,” said Abu Omar.

Once a law student, Abu Omar now works as a nurse in at a Daraya field hospital. He spends his spare time along with four other men and two women counting the number of times the city is struck by regime projectiles as part of documentation center.

Daraya has long been a thorn in the side of the regime, a rare rebel outpost just on the outskirts of the city. “The constant bombardment might be a form of revenge, with the aim of destroying the city,” Matar said. As he spoke to BuzzFeed News via WhatsApp, bombs echoed in the background.

“If it’s directly above us, we try to run to the closest basement,” Matar said. “Barrel bombs take about 30 seconds to hit the ground, giving us a little bit of time to run. But at night, we enforced a curfew on ourselves and just try to stay underground. Every night helicopters drop barrel bombs. We can’t see them; we can’t determine where they will hit.”

Life has worsened since November 2015, when Russian planes and weapons began to target the city. Surveillance flights began scouring the skies, as the regime sought to drive a physical wedge between Daraya and the opposition held town of Moadimiya to the west.

The Syrian regime once claimed that Daraya contained no civilians, but only fighters. The residents responded by holding a protest with women and children.

In recent days, ahead of a ceasefire brokered by the U.S. and Russia, Syrian regime officials have been adamant about continuing to pummel Daraya, whose strategic location next the Mezzeh airbase gives it the potential to disrupt Russian and Syrian plane launches. “The army is committed to the Syrian leadership’s decisions, but those in the city of Daraya are terrorist Jabhat al-Nusra groups and are not included in the ceasefire, and we will continue to fight those armed on the Daraya front,” an army official was quoted as saying on Syrian state radio. 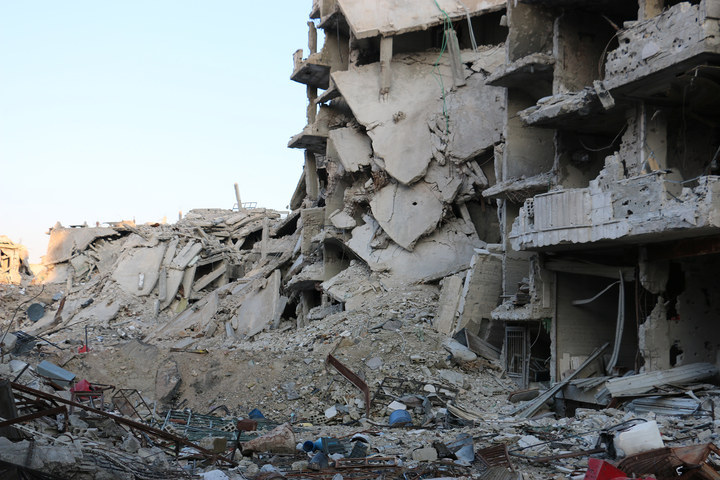 Darayans mock claims they are linked to Jabhat al-Nusra. In a recent months, a group of fighters sought to create a offshoot of ISIS in the city but they were promptly rounded up and arrested, said Ahmed Mujahid, nom de guerre of a community leader who spoke to BuzzFeed News via Skype.

“Really?” Mujahid quipped. “We’ve been cursing and spouting blasphemies for three years for them to come and call us Nusra?”

Matar told BuzzFeed News that 90% of the fighters in Daraya belong to Shuhada al-Islam, or Martyrs of Islam, a faction of the Southern Front of the Free Syrian Army, and the other 10% of the armed forces belong to a faction of Al Itihad al Islami li Ajnad al Sham, or Islamic Union of the Soldiers of Damascus. “The regime is constantly trying to spread the idea that those in Daraya and the factions in Daraya belong to al-Qaeda or Jubhat al-Nusra, or other extremist factions,” said Matar. “All of these men are the sons of Daraya. None are strangers or from outside the city.”

“The regime says that there’s Nusra and extremist groups in Daraya, even though we’re threatened by ISIS groups if they ever get to Daraya,” said Mujahid. “Daraya is an enemy to all dictators, be it the regime and its militias or ISIS, al-Qaeda, and its groups.”