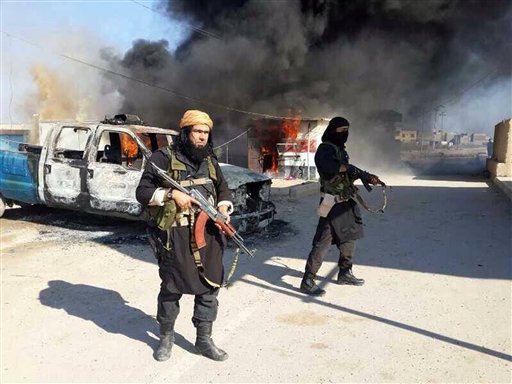 Mia Bloom spoke with Syria Deeply about ISIS’ recruitment of women and the reality of their lives in Syria and Iraq.

Women recruited by the Islamic State – so-called “jihadi brides” – often think they will be helping with front-line duties. They are, in fact, being used to solve the fighters’ “marriage crisis” and are largely confined to domestic chores such as cooking, cleaning and childrearing, according to a leading academic.

ISIS recruiters paint a utopian view of what a woman’s life will be like with the group, says Mia Bloom, professor of security studies at the University of Massachusetts Lowell, who has extensively studied the organization’s recruitment techniques. Bloom feels Arab and Western governments need to make more of an effort to paint an accurate picture of what life for ISIS women is like to counteract the Islamists’ effective social media marketing.

A recent manifesto by al-Khansaa Brigade, a female branch of the Islamic State, makes it clear that women’s roles should be limited to the household, Bloom says. They are encouraged to have children as a means to ensure the next generation of jihadists and secure the longevity of the group.

« Understanding how ISIS is using women will go a long way toward devising counter-messages to prevent young teens from leaving home for Turkey and Syria, » she says.

Recruiting brides is critical to the radical group, she adds, because it is an effective tool to lure male foreign fighters to join and stay with the group.

Bloom spoke with Syria Deeply about the group’s recruitment of women and the reality of their lives in Syria and Iraq.

Syria Deeply: You say ISIS has emerged as the perfect solution to the Middle East’s « marriage crisis. » What do you mean by that?

Bloom: ISIS has been exploiting and recruiting women for the purposes of what I call the three R’s: Recruit, Reward and Retain. One of the reasons we see so many male fighters coming from the region, such as Turkey, the Gulf and Tunisia, is because women are being used as a form of recruitment and reward. In addition to being promised a salary of $600–$1,000 a month and a free house, male foreign fighters considering joining the Islamic State are also promised a wife and, in some cases, a Yazidi girl. ISIS has also instituted a payment system wherein you are paid a stipend for every child you have in the Islamic State.

Syria Deeply: What tools and messaging are ISIS using to recruit young women? What roles do women play within the Islamic State?

Bloom: It’s very similar to the ways in which we see pedophiles grooming young people online. These new platforms that utilize social media allow for multiple iterations with a person on both sides of the computer, and this allows recruiters to engage in the grooming process that we see pedophiles use:Establishing rapport and trust, creating an environment of secrecy etc. There are multiple iterations over the course of many weeks or months where the young girl who is involved with someone on the internet, presumably inside the caliphate, is getting a very distorted view of what her life would be like if she were to join the Islamic State.

Women are not engaged in ISIS in a front-line capacity, regardless of what people have said or assumed. The reality for women is closer to the document released by ISIS only in Arabic and intended for women in the Gulf countries, called Women of the Islamic State: Manifesto and Case Study,in which a woman’s role is circumscribed for childbearing, marriage, cooking and cleaning, and they may not even be able to leave the house.

However, ISIS is delivering one message to Western teens in English and a very different message in Arabic. If Western women knew they were joining ISIS and would be locked up in a house, it probably wouldn’t be as appealing as the narrative that they are selling in English, which says they are going to have an exciting experience, and make a contribution toward helping their people, and so on.

Syria Deeply: Is there a profile of the women ISIS is targeting?

Bloom: We are seeing two stereotypes emerge from the women ISIS is targeting: the very young, high-achieving female student versus. the older woman, sometimes a convert who is a seeker, who may have some pattern of abuse, low self-esteem and drug use in the past. We have two really distinct categories. These girls are similar to the young boys in Minnesota who were recruited by the Somali group al-Shabaab. They were high-achieving young people – one boy had just gotten into Harvard University. One of the ways in which they attracted them was a combination of guilt trip, nationalism and appealing to their greater sense of doing something for their people, but it’s all a manipulation.

One of the methods used to recruit young girls is by appealing to their greater sense of doing something for the people. Abase Hussen’s plea to get his daughter back from Syria after she left to join the Islamic State is indicative of this divergence from reality and an example of how Western women who are altruistic are being preyed upon. He said, “I know you want to help the people in Syria, you can help from home.”

It’s not a hard sell to get people who are at base altruistic and think they will be helping Syrians to join the Islamic State, because Bashar al-Assad has been so brutal and basically engaged in a genocide of the Syrian people.

Syria Deeply: How are women playing a role in the recruitment process?

Bloom: The female recruiters are adept at lowering the girls’ guard and putting them at ease, reducing the girl’s resistance to being approached directly, and creating an environment of secrecy and exclusion of others. We see a very interesting dichotomy between the older women, who are on the internet engaged directly with the men from the Islamic State with whom they think they are establishing a relation, versus the young girls, who are not on the internet with men, but talking to other women who are acting as intermediaries. This is a tactic used in pedophilia – where pedophiles don’t approach the child directly, but use an intermediary. It is an insidious thing that you are seeing with women like Aqsa Mahmood, who used her Twitter account to convince young girls that this is a good idea and that they will have a wonderful life.

Syria Deeply: What are their experiences on the ground and how do they differ from what they are promised?

Bloom: We don’t have a lot of information, in part because the girls who are having less-than-ideal experiences probably are not allowed to broadcast this on social media. Over a month ago, the Islamic State killed 162 foreign fighters because they wanted to leave and go home. We’ve had only a handful of information about people who have left.

However, Tareena Shakil is a very good example of someone who joined the Islamic State and said that the experience on the ground was very different from what she was promised. She is said to have regretted her decision to go to Syria after she was forced to become a jihadist bride and she said that ISIS “lied to her” about the reality on the ground.

It’s a very powerful counter-narrative that isn’t being told because of the knee-jerk reaction where people dismiss women who join ISIS, basically saying “to heck with them” if they’ve gone to ISIS. However, a lot of the girls are underage and aren’t capable of making the decision to go. There is a level of manipulation, to say the least.

The fact is, women don’t have these roles in the Islamic State, regardless of how women like Umm Ubaydah assumed they would play a part. I don’t know if it remains in the range of possibility that ISIS will use women on the front lines if it gets desperate.

This is also exemplified by examples of women changing their tunes when they get there. Umm Layth (Aqsa Mahmood), for example, stopped talking about engaging in a suicide mission once she got to Syria. All of a sudden she was tweeting about the joys of sisterhood, of being with her sisters of Islam, posting pictures of food and all the things they’ve cooked. It’s hard to know exactly in what ways the reality differs on the ground, but we definitely see a difference in emphasis in what they talk about before they get there versus what they speak about afterward.

Syria Deeply: How do you stem the flow of women going to Syria to join the Islamic State?

Bloom We need to have a creative and nuanced understanding of women’s involvement in the Islamic State, especially the young girls who are being victimized. If the parents of young girls who go missing are worried that they will subsequently become persons of interest subject to investigation, they probably will be less likely to come forward out of fear they will be subject to a backlash. There is also a worry in countries with rules and regulations that either cancel your passport, take away your nationality or instantly criminalize you just for going to Syria, that parents will never see their kids again if they report them missing.

Even if the kids want to get out, there is no way for them to leave. On the one hand, we need to have better messaging that is an accurate depiction of the reality on the ground and of what life in Syria is like, so that Western girls know that they are being told a different story in English than in Arabic. But at the same time, in terms of U.S., Canadian or European policy, in cases where a girl hasn’t gone to Syria yet or is trying to get out of Syria and isn’t culpable of a crime, we have to understand that she might be a good vehicle to deliver this counter-narrative message.