Syrian lawyers and activists launch suits against regime’s security leadership in European courts, hoping to to establish a mechanism for transitional justice for Syrians on a national level 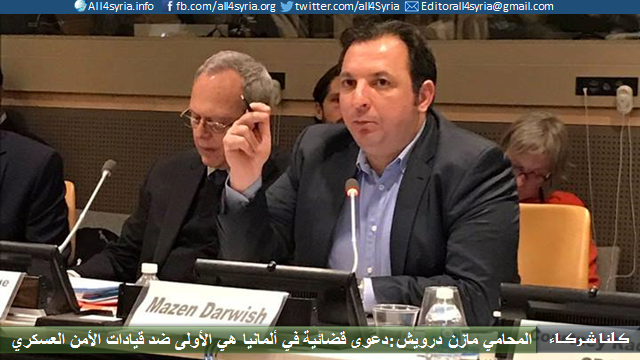 Syrian activists in recent months have succeeded in amplifying the voices of thousands of prisoners languishing in President Bashar al-Assad’s prisons, while a number of Syrian organizations have filed lawsuits in both France and Spain against regime security bodies on behalf of dual-nationality victims.

The most recent of these successes was a lawsuit filed with the German public prosecutor against regime security chiefs. The suit was filed by a group of survivors of systematic torture in Assad’s security branches, including Syrian lawyer and activist Mazin Darwish, head of the Syrian Center for Media and Freedom of Expression.

Darwish told All4Syria that the lawsuit was the first of its kind because the victims were Syrians who were not dual nationals. He noted that previous suits filed in France and Spain were brought by dual-nationality victims.

Darwish said there were witnesses, evidence and documents making up a comprehensive file, adding that it was “the strongest lawsuit that has been presented to the courts so far.”

Darwish added that the lawsuit included the names of six senior regime officers and a long list of other names, including that of General Mohamed Mahla, head of the military security bureau, Shafiq Maso, General Hassan Daboul, who was recently killed in Homs, and many others. He said that the lawsuit concerns only four branches of the military security, Branch 215, the Regional Branch, the Palestine Branch and the Investigation Branch.

In response to a question about whether there were more lawsuits against regime figures abroad, Darwish said that the same group of survivors was preparing to file another suit against the Air Force Intelligence agency and that another group is preparing a lawsuit in France.

Regarding the impact of such lawsuits on public opinion in the West, Darwish said that he expected “excellent results.” He explained that convictions against the Assad regime by judicial bodies in the West would make it difficult for countries to work with it and keep it afloat.

He added that the convictions would also be an achievement for the victims and hundreds of thousands of Syrians whose cause has been distorted and merged with the issue of terrorism and Islamic State (ISIS). It thus provides a sort of justice for Syrians.

Darwish believes that the ideal form of a solution for Syria lies in the establishment of a mechanism for transitional justice to be carried out on a national level in Syria. At the same time, he is aware that “this issue seems difficult.”

He added that the talks in Geneva are negotiations between “warlords” trying to divide the benefits and gains among themselves. Therefore, the issue of justice, accountability and the rights of the victims is not on the list of priorities for the Geneva talks. A better course for justice, Darwish said, is for the International Criminal Court or special international tribunals to try crimes committed in Syria.