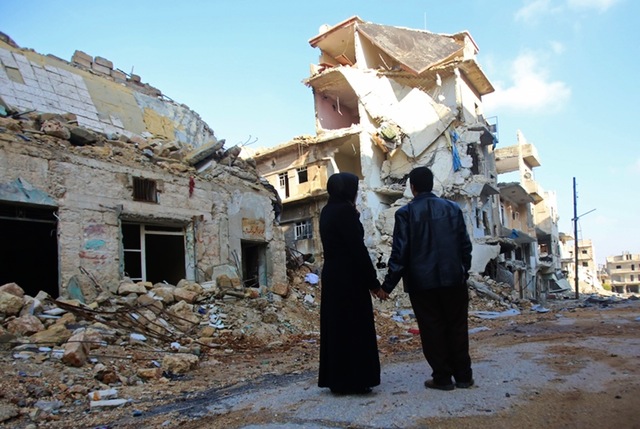 Kefa Jawish (L) and her husband Tajeddin Ahmed look at a destroyed building in Aleppo’s northeastern Haydariya neighborhood as they head to check their house for the first time in four years on December 4, 2016. AFP/Youssef KARWASHAN

The humanitarian crisis in eastern Aleppo is tragic but not unimaginable or surprising – it is the result of years of inaction by the international community, writes Physicians for Human Rights researcher Elise Baker.

After more than three months under siege, residents of eastern Aleppo are clinging to life. The few remaining hospitals have been bombed repeatedly and put out of service, and food rations have run out. More than 31,000 people have been displaced as pro-government forces advance on the city. The lucky ones have made it to other neighborhoods and found shelter with friends and relatives or in abandoned buildings. The less fortunate have died or been detained by government forces.

The images coming out of Aleppo are numbing, gut-wrenching and devastatingly sad. But what they are not is unimaginable or unexpected. After all, we’ve watched catastrophe after catastrophe unfold in Aleppo and Syria for nearly six years. This latest catastrophe, as horrible as it is, is the predictable result of our collective inaction.

When we first heard of war crimes committed in Aleppo and across the country in late 2011 and throughout 2012, the world was understandably shocked by the Syrian government’s blatant disregard for civilian life and laws of war. Government forces and their allies besieged entire cities, leaving civilians without access to food or medical care. They repeatedly launched direct attacks on hospitals, destroying many. They detained or disappeared thousands of civilians and committed countless other war crimes.

These atrocities should have been enough for world leaders to understand that international norms were being shredded. And that understanding should have been enough for world leaders to unite to end these war crimes, for the sake of civilian protection and the defense of international law. But shock was only registered on paper, in public statements, and the response was not unified. In February 2012, the Russian Federation and China vetoed a U.N. Security Council resolution that condemned and demanded an end to human rights violations.

But the council did not enforce these resolutions and instead chose to watch the very war crimes they condemned metastasize into crimes against humanity.

This initial inaction and disunity set the stage for the world leaders’ repeated failure to end war crimes in Syria. The few times the U.N. Security Council united, it was only to pass resolutions agreeing on the most fundamental principles of human rights and humanitarian law. But the council did not enforce these resolutions and instead chose to watch the very war crimes they condemned metastasize into crimes against humanity.

In the face of these growing atrocities, world leaders continued with the same inaction: issuing statements of shock and concern. At best, these statements acknowledged the unprecedented besiegement of entire towns, chemical weapons attacks and hospital bombings that have characterized the Syrian conflict. At worst (and most common), these statements and the failure to enforce resolutions taught Syrian President Bashar al-Assad and his allies that their war crimes would go unpunished; they were essentially accepted as the reality of the Syrian conflict. In fact, on Monday, Russia and China once again vetoed a U.N. Security Council draft resolution calling for a brief cease-fire in Aleppo.

And now, nearly six years into this conflict, eastern Aleppo’s streets are littered with bodies and duffel bags. These are the remains of residents who ran from their government’s encroaching ground offensive, only to be killed as their government shelled and bombed the only escape route. They were parents who taught their kids to listen for the sound of approaching helicopters and look to the sky to run from barrel bombs. They were young adults who buried their family, friends and neighbors in communal graves after cemeteries ran out of space. They were children who spent their days searching their city for food in the hope that their siblings would have a meal that day.

We must come to terms with the fact that war crimes continue in Syria because we have allowed them to persist.

When we look at the horror that Aleppo is today, we must stop issuing statements of shock and concern. Let’s not pretend that what we are witnessing now is anything but the result of years of inaction in the face of one of the worst human rights and humanitarian crises of our time. We must come to terms with the fact that war crimes continue in Syria because we have allowed them to persist. We must take responsibility for our inaction and then choose a different course.

Let’s start by experiencing not shock and concern, but actual outrage – outrage that will unite us and galvanize us to demand action from our governments to circumvent the paralyzed U.N. Security Council and stop these atrocities.

Eastern Aleppo’s streets are littered with the grotesque consequences of our inaction. Let us act now to ensure that the rest of Syria is not doomed to the same fate.