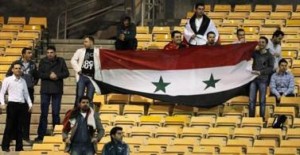 Abdelbasset Saroot, the former Syria international goalkeeper, has said his country’s athletes do not want to compete in this year’s London Olympics because « they don’t want to play for a flag that they have no pride or faith in ».

In an interview with ITV News, 20-year-old Saroot said: « I personally know the majority of the athletes don’t want to take part and they are only going (out of) fear (for) their families – the regime repercussions if they don’t comply. »

Saroot, whose country failed to qualify for this summer’s Olympic soccer tournament after a 2-1 defeat by Uzbekistan last month, is a supporter of the anti-government protests in Syria.

« My message as a footballer, athlete and activist first of all is that we are seeing a real massacre here and the world isn’t speaking except of numbers and death tolls.

« These are real people, this is a massacre because people are being butchered, people in the world have forgotten about the humanitarian crisis – houses are being demolished. »

With pressure increasing for Syria to be banned from this summer’s London Games, the president of Syria’s National Olympic Committee (NOC), General Mowaffak Joumaa, told ITV News: « There is no question about it – we are taking part. »

The presence of the Syrian delegation at the Games starting in July is set to be controversial.

More than a year of protests against President Bashar al-Assad’s rule have prompted a crackdown that the United Nations says has killed more than 9,000 civilians. Syria says 3,000 members of the security forces have been killed by armed rebels.

Assad has agreed to a ceasefire negotiated by international peace envoy Kofi Annan from April 10, the latest effort to end the bloodshed.

Syrian opposition activists quoted in the British media have urged Britain to ban the NOC’s Joumaa and other officials regarded as close to Assad from the Olympics.

Prime Minister David Cameron said last week that Syrian athletes will be able to take part in the London Olympics but any of the country’s officials covered by a European Union travel ban will not be welcome.

It was not immediately clear whether any Syrian officials planning to travel to the Olympics are covered by sanctions.

The International Olympic Committee said last month that Syria would be at the Games despite the violence there.

But Saroot added on Tuesday: « Our message to the IOC is that half of the Syrian teams going to play matches or those taking part in the Olympics will not know much about what is happening here in Homs (Syria’s third-largest city). The authorities hide the news from them.

« You have to view those athletes as cut off from reality – they don’t know the extent of the shelling … they don’t know that a shell could be hitting their mother, father or a relative at any moment in Baba Amr (neighbourhood of Homs). There is no Baba Amr now anyway … it’s all demolished.

« It’s just stones and soil … they don’t know that a fellow Syrian footballer Ahmed Al Shedan, may he rest in peace, was martyred here in Homs. He was a star.

« They don’t know that other athletes’ families have been killed and massacred, » said Saroot.

« The athletes don’t want to play for a flag that they have no pride or faith in. »

He said that most Syrians would only take part in London for fear of repercussions if they do not go if selected.

« I know these athletes are leaving for London out of fear for their families, and I want to send them this message – that in Syria now the sports culture has died, there is nothing left.

« No honest leagues or games, and at the moment there is only one major movement and that is the revolution, the protests and a people who are fighting for their dignity and freedom. »

But Saroot also urged the IOC to tell the athletes who do come to London what was really happening in the country.

« Our message to the IOC is to get the athletes in secret, get them on their own in private, and I’m confident that the athletes will then see what’s happening with us.

« I cannot but send them this message – and for that reason I am not against the IOC helping our athletes get to London. »

However, the NOC’s Joumaa told ITV: « In all certainty we as the (Syrian) Olympic Committee are the ones who ensure the full safety and security of the athletes so they can take part in the Olympic Games.

« Most of our grounds, sports centres and training halls in Damascus, Aleppo or Latakia or any other cities are all safe and have no security issues.

« Certainly there are areas at the moment in Syria that have had some slight negative effects on the Olympic athletes, but we in the Syrian Olympic Committee make sure we keep the sports activities going and there are many teams that are training to their full potential in preparation of the Olympic games in the best sports and creative activities possible.

« There is no question about it, we are taking part in an official way and with the best quality of athletes here in Syria.

« And the Syrian Olympic Committee is the sole legitimate and only representative for the Syrian athletes taking part in the Olympic Games in London.

« And of course we are committed and determined to take part and we shall not be absent from the London Games. »