Long Read: How the Syrian War Changed How War Crimes Are Documented – by Cristina Roca

Seven years of war have transformed Syrian monitoring groups into sophisticated investigation centers. But with few options to hold perpetrators of humanitarian law violations accountable, the number of Syrians supplying evidence of human rights violations is dwindling, along with their hope for justice.

THE SYRIAN WAR is probably the most documented conflict ever, but with no end in sight, the civilians and activists who have collected millions of photos, as well as thousands of videos and casualty lists, are quickly losing faith in international accountability mechanisms.

Over the past six years, armed largely with determination and basic research and documentation skills, many local NGOs have been gathering evidence of alleged war crimes and conducting their own investigations violations of humanitarian law, in the hopes that perpetrators will be accountable for their crimes – justice that the International Criminal Court (ICC) has so far failed to guarantee in Syria. 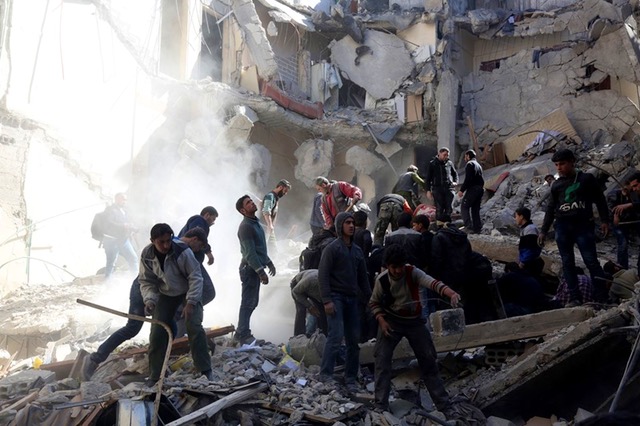 Search and rescue team members, along with civilians, remove the debris as they try to locate survivors after an airstrike over residential areas in Saqba Town of Eastern Ghouta Region of Damascus, Syria. Anas Aldimashqi/Anadolu Agency

The United Nations set up the Independent International Commission of Inquiry of the Syrian Arab Republic (CoI) just a few months into Syria’s anti-government uprising, in August 2011, to gather evidence of human rights violations for future use in a criminal court. But the CoI’s work was hamstrung by its inability to send any investigators into Syria, instead heavily relying on the work of Syrian grassroots organizations monitoring and documenting violations. As the amount of data quickly piled up, local NGOs had to step up to the task of gathering, cross checking and compiling this evidence.

Nearly seven years later, there are now over 400 individuals and local groups supplying various Syrian documentation centres with information. They, in turn, collaborate with international NGOs documenting human rights abuses, according to Mohammad Al Abdallah, the director of the Syrian Justice and Accountability Center (SJAC), a D.C.-based nonprofit that “promotes justice and accountability in Syria.”

From Activism to Case Building

Evidence gathering has become much more sophisticated, says Alex Whiting, a Harvard Law School professor who specializes in international criminal prosecutions. For example, SJAC developed an in-depth database to ensure that each piece of data is verified, classified, protected and linked to existing evidence. Every new piece of evidence is compared and corroborated against this massive body of interrelated information. This process allows for the reconstruction of events by weaving together a web of testimonies, videos, photographs, documents and medical records, and then allows users to view the different components, for example the actions involved, for each specific incident.

It’s a big change from the first days of counting victims for advocacy purposes. “I cannot compare our work now to how it was in 2011,” says Husam Alkatlaby, the director of the Violations Documentation Center in Syria (VDC), one of the most important Syrian documentation centres that shares information for SJAC’s database. Back then, it was all they could do to try to keep up with the mounting violations.

The cooperation of international lawyers was key to professionalizing evidence gathering, says Alkatlaby. Among the most successful organizations conducting trainings in human rights law and the importance of technical details to ensure high-quality and accurate documentation, is the Commission for International Justice and Accountability (CIJA), according to international criminal justice expert Mark Kersten. Since 2012, it has trained on-the-ground groups to investigate alleged crimes committed by the Syrian government and the so-called Islamic State. Rather than just documenting events, they aim to secure documents. They have smuggled more than 600,000 pages of records out of Syria, including evidence showing the chain of command of orders, enabling them to link war crimes to high-level actors and compiling what’s been dubbed “The Assad Files.”

Kersten says that CIJA’s ability to work on the ground has made up for the Col’s significant shortcomings and “changed the way we think of investigating.” However, being on the ground comes with its own set of challenges, namely that in order to do continue their work, they cannot investigate every side in the conflict.

Both Alkatlaby and Al Abdallah stressed the importance of the centers remaining neutral to protect the credibility of their evidence. While nearly every party in the conflict has been accused of violations and should be held accountable under humanitarian law, in practice, local documentation groups inside Syria have often had to refrain from investigating armed opposition groups to continue collecting evidence on the ground. Larger documentation groups receiving the information must take the reality of biases into account, Alkatlaby said.

The increase in sophistication however, has not been matched by better options for accountability. So far, evidence from SJAC and the VDC has been used to help the scant universal jurisdiction cases opened in Germany, France and Spain. The centers have also helped alert national authorities when they have evidence, for example, that an asylum applicant has committed war crimes in Syria.

But when it comes to universal jurisdiction cases, the odds are even slimmer. Al Abdallah says such outcomes don’t always satisfy Syrians, who want to see perpetrators punished. Alkatlaby concurs, saying a handful of cases in European countries “is not at all the justice we’re looking for,” but it’s the only window for action there is for now.

Nearly all the major documentation groups are now working to shape the U.N.’s International, Impartial and Independent Mechanism (IIIM), established at the 2016 Geneva talks. Though the the IIIM and Col are “complementary” entities, U.N. High Commissioner for Human Rights Zeid Ra’ad Al Hussein stressed that the IIIM has a “clearly distinct” mandate. The mechanism aims to unify the unwieldy marketplace of information and various evidence-gathering groups in order to create methodologically consistent case files. It will also look for the most appropriate options for using them, which at the moment are limited to national courts in foreign countries.

At the very least, the IIIM’s willingness to closely cooperate with Syrian documentation groups will hopefully lead to better coordination between Syrian and international efforts, Al Abdallah said.

It remains to be seen what exactly the IIIM, which is still being set up, will change but Alkatlaby – who earlier this month met with Cécile Aptel, who is in charge of developing the IIIM – said the new mechanism is “not enough, and the IIIM itself agrees.” The IIIM can build cases and work in cooperation with national prosecutors, but it doesn’t have the mandate to start an international criminal proceeding.

According to Eyal Weizman, director of Forensic Architecture, a Goldsmiths University research group, holding states accountable in court is impossible: The ICC is subordinate to politics (as the U.N. Security Council’s blocked attempts to refer Syria to the ICC show).

The organization combines the work of architects, artists, scientists and investigative journalists to expose state-perpetrated crimes in Syria by investigating them and making them public. While public exposure does not guarantee accountability, there have been instances where it has changed the way a government acts, or at the very least, forced them to acknowledge their answers, Weizman said.

When the U.S. said it targeted “several terrorists” at an al-Qaida meeting place in Idlib on March 16, Forensic Architecture, in collaboration with investigative journalism platform Bellingcat and Human Rights Watch, used open-source data and witness testimonies to reconstruct to a model of the building before and after the strike. They determined the strike actually hit a mosque in the town of al-Jinah killing several civilians, as activists had reported. The U.S. went back on its initial official statement about the Jinah strike and admitted the version of events indicated by the evidence compiled by the three groups.

Syrian groups have long used public exposure of perpetrators of human rights violations to fight false narratives. Fadel Abdul Ghany, the chairman of the Syrian Network for Human Rights (SNHR), says that, since 2012, when they saw that the Syrian government remained impune and was using the media to skew reality on the ground, SNHR has been focusing on fighting those lies by publishing reports reflecting the situation in Syria.

Exposing perpetrators “represents a fight against impunity,” Baltasar Garzón, the former Spanish judge famous for putting Chilean dictator Augusto Pinochet under house arrest in 1998, told Syria Deeply. But the question is whether or not evidence obtained through the documentation groups’ creative use of technology will be admissible in court – especially given the risk of doctored digital files.

Demonstrating the chain of custody should be enough to ensure evidence gathered using new technological methods is admitted, Garzón said, though so far, only a few pioneering judges and prosecutors have done so. He added that legislation is needed to regulate the use of technology in order to guarantee the quality and impartiality of these new forms of evidence.

Like any type of evidence, digital files are corroborated by other types of evidence, such as testimonies, medical records, etc., which ensures their credibility, according to Al Abdallah, a lawyer by training.

However, this requires a collective reconstruction of the truth, where hundreds of citizens contribute data and testimonies, turning it into a social product that creates hope, Weizman said. But after seven years of conflict with little accountability, many Syrians find it hard to stay hopeful.

The turning point, for Alkatlaby, was September 2013, when the agreement to destroy Syria’s chemical weapons was made: “Assad crossed a red line [with the use of chemical weapons], and he survived. Before [that], people came to [us] to give information; now, we have to run after them,” he said. And in a conflict as complex as the one in Syria, he said these sources are essential: Without them, “It makes no difference how big your team is – you can’t cover [it all].”

Al Abdallah says that the number of trained evidence-gatherers on the ground has also dropped significantly. Many of them have either had to leave Syria, or have been arrested or killed. As a result, entire “towns and cities are left totally without coverage,” he says. The SJAC has been working on securing other types of evidence, such as medical records, to make up for this.

While Syrian groups collecting evidence may help fill the gaps left by international mechanisms, political players and international accountability are the only way to solve the deadlock. For Alkatlaby, the message for international actors is simple: “We are doing our work. Please do something with it.”

Cristina Roca is a freelance journalist based in Barcelona. Her work has appeared in Maclean’s, the National Post and other publications. She is a fellow at the Munk School of Global Affairs. Follow her on Twitter @crisisfwp.