Mazen Darwish Reveals Why He Cut Relations With Assad-linked Parties 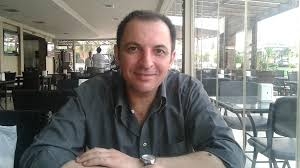 Lawyer and founder of the Syrian Center for Media and Freedom of Expression Mazen Darwish gave an interview to German television, his first media appearance since he was released from custody and left Syria.

Darwish expressed his happiness at the launch of the Syrian revolution, saying: “We are not an obsolete people, we still have life and a desire to be part of humanity’s future. Those days were the happiest of my life. This work over the years, in a theoretical or educational or instructive sense, gave results, one way or another. The people had national demands and a dream for a better future. Those were the best days of my life.”

He added: “(Bashar al-)Assad’s first speech [following the uprising] was absurd, free of any of the points we were talking about, and had no semblance of patriotism. On the contrary it was like a declaration of war. Because of that, after the speech I did not communicate with any government bodies — after Assad revealed in his speech that there was no program for human rights reform in Syria, and that the regime’s architecture was beyond repair.”

Prior to the speech, Darwish revealed that Assad’s security adviser, General Mohammed Nassif, contacted him in the first month of the revolution, to find out the demands from the Syrian street.

He said: “After I was released from prison for the second time, someone came from the office of General Mohammed Nassif. We had six meetings in which we spoke about the people’s demands, including constitutional reform, separating party from state, and initiating freedoms and a law for political parties, cancelling the emergency law, and ending the impunity of security personnel.”

Darwish said the Syrian mobilization in 2011 was not linked to the elite of political activists and media. Along with a number of others, he responded to this development by establishing a center to document the violations and atrocities which were being carried out in the country.

He said that what irritated the regime at that time was community activism, action through local coordination committees, and that people were emboldened to have a political vision and demands, and push toward achieving a democratic transition and peaceful change in the country. With the volume of challenges confronting the regime for the first time in 50 years, it felt as though there was a real existential threat, and so it reacted differently than in previous times.

Darwish established the Syrian Center for Media and Freedom of Expression in 2004. He was arrested a number of times, most recently in February 2012, and traveled to Germany following his release in August. In 2015, Darwish was awarded the Reporters Without Borders press freedom prize and the UNESCO world press freedom prize.