A world away from Geneva II, the inhabitants of one Syrian village have dug in on their crag and won’t give up the fight any time soon. 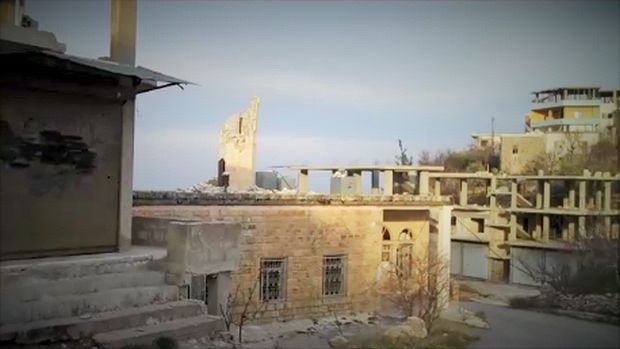 A year ago the villages of Jebel Akrad were home to living, breathing communities. Tucked into the mountain range in Syria’s northwestern corner, the village squares were occupied by old men drinking strong coffee and puffing on cigarettes. Children played in the streets, sporting “Free Syria” hats and armbands. The minaret was intact and everyone called it a miracle that it still stood there, defiant.
Now the minaret is broken and the old men on the square are gone. The village sits on a frontline of sorts. A valley separates the few remaining mountain inhabitants from President Bashar Al-Assad’s military bases on the other side.
Many of the men in the village have taken up arms against the government forces. The villagers have captured their bases, but are unable to hold onto them for long. They fight to remain lords of this inch of land that has been cultivated by their forefathers for generations.
The army used to pound the cluster of villages with 40 shells a day, although this has been reduced somewhat since the villages emptied out. Today missiles dispatched from the coastal town of Latakia sear the mountains, forming dark patches of charred forest.
The army often targets the roads. Villagers drive at breakneck speed, gritting their teeth and invoking God to cover them. The government used to build roads, not destroy them. Villagers now etch their own roads into the mountains; in an extraordinary feat of engineering they have carved out roads that are protected from the military bases. Locals know these roads inside out, but for those who are unfamiliar with the topography it is easy to stray into regime territory. The occasional “STOP” sign marks enemy lines, but it’s the unlatching of the safety catch on a Kalashnikov or a hushed declaration: “God is greater than you Bashar, God is greater than you” that gives away the more obvious demarcation.
Children are a rare sight. Abu Ikrima has two toddlers who were born during the conflict. Their home faces an army base; his children know which rooms they can use during the day and which ones are off-limits. At night not even a lighted candle is allowed in case it attracts a tank shell. They also know that there is nothing you can do when the barrel bombs fall except make a declaration of faith.
The older children who remain attend the village school, and most are the sons of fighters. Every school I visited had been shelled, bombed or scarred in some other way by war.
In this besieged mountain range the responsibility of educating a generation of children falls on the shoulders of Professor Mohammed, formerly of Tishreen University in Latakia. In what can only be described as a masterclass in the art of diplomacy, he juggles approximately 400 schools while endeavoring to remain independent from the agendas of the brigades and foreign donors.
But politics is clearly to be seen in the classrooms. Alongside the large caricature of Assad vomiting deadly barrels, are Free Syrian Army flags as well as the flag of the Islamic State of Iraq and Syria.
In this predominately Sunni village, beards have lengthened as Islamist ideas have hardened. Sheikh Walid, a man tasked with teaching religious study, has a style tinged with a martial quality. Some of the lessons are taught by fighters from North Africa. The defiance of these combatants is replicated in their students. Ask them about the West’s position in this tiny village and they say: “They are with Assad.” And what of the foreign fighters? “May God protect them.”
Much of the ordinary has become shaped by warfare. Young men argue over sweethearts and their disputes sometimes spill out onto the streets. The North African fighters pull the feuding sides apart and remind their Syrian counterparts that now isn’t the time to fight over the village darling.
War of course is mostly boredom interspersed with frantic action. The local brigades take it in turns to patrol the frontline one day a week. The young fighters wait for that day the way the young usually wait for the weekend.
Most evenings, fighters gather around an abandoned villa warming themselves on a stove. They drink tea, chainsmoke and watch anything from the Smurfs to Syrian TV dramas, oddly dubbed into the “Queen’s English.” They talk about who was killed that day, or who is now wanted by Interpol. While the brigade commander, Abu Muhammad, plays on his phone, another rebel dreams of being a singer and another texts a message to his fiancée on the Turkish side.
Some indulge in more serious activities. The older veterans are on a mission of self-improvement and devour anything from Tolstoy to Dan Brown, while the younger fighters read books like The art of urban warfare.
They are proud of their status as jihadists—some show off their battles on their mobile phones while others keep their heroics to themselves. “I have no time for heroes; most who want to be heroes are fools,” says Abu Jihad, adding: “They are often martyred with a bullet in between their eyes.”
Whatever happens at Geneva II, these villagers have dug in on their crag and expect a long war. “We know,” says one, “that the West will come after us calling us terrorists, and we are ready for that eventuality too.”