My Days in Damascus Entry 4: Getting Permission

Farah is a young woman living in Syria’s capital city, where she faces the daily struggles of trying to maintain a normal social and professional life in a country being ripped apart by war.

DAMASCUS – I left my family’s house to live alone several years ago, and it was a choice that I’m still thankful I made.

A young female living alone in a rented apartment is not a very common thing in this society. This definitely doesn’t make anything easier, nor does it change the way people look at or treat this single woman.

What does she do alone? Where does she go day and night? How does she manage to pay the rent on her own? Doesn’t she have a family? Who is this visitor? There must be something wrong in her family. On and on, these are questions in the eyes of my different neighbors. They pop up whenever they see me doing an activity alone, like taking out the garbage at night or shopping for a one-person dinner.

However, this never stopped me from enjoying this life I chose, which taught me to be stronger, more independent and more responsible for my daily and long-term needs and plans.

I lived in five different houses in five years, but eventually this adventure came to an end at a time when I was going through a terrible financial phase of my life. I couldn’t handle the high rents and I was forced to return to live in my family’s house for about a year. This was was not the easiest thing to do, especially going back to the family house rules!

But later on I managed to get a new job with a reasonable salary that I could use to find a new apartment to rent.

It was time to look for a new place all over again. Damascus is a crowded city, and the influx of displaced people and families coming from the war-damaged suburbs and other Syrian cities have allowed the capital’s real-estate agents to double and even triple rental prices. It has also caused landlord and homeowners to be more careful when choosing the tenants who will rent their houses.

Tenants must be neutral, with a clean political history and preferably have an ID proving that they are from a pro-regime place, otherwise they won’t be given permission to sign a rental contract, which means more headaches for the landlord. The result is this: The more polite, family-orientated (singles are not preferred) and pro-regime you are, the more chances you have of finding a good place and guaranteeing the rental permission needed from the security branch responsible for the neighborhood you’re going to live in.

Searching for a decent studio in the city center, was, for me, a long struggle. It lasted for months. Of course, all my attempts to find a reasonably priced apartment without the help of the real estate broker were in vain. But I finally found it! I settled for something that can barely be labelled as a studio. Yet I had to accept it the way it is, because the rent prices are madly high.

Once I found a suitable place, I then had to tackle all the bureaucratic procedures required to sign the contract. I also had to undergo a security and background check by Branch 40 of the state security’s internal security unit after I requested their permission to live in their jurisdiction.

This new adventure confirmed to me that we still need so much time to be able to reach a point where society accepts and respects a woman living on her own without looking for all the possible ways to take advantage of her just because there isn’t a man around to see.

Nearly everyone involved in the procedure – from the realtor, to the studio’s owners, to the clerk at the governorate building who had my contract officially registered and even the security and policemen at the station – would seize the slightest opportunity to dissuade me and convince me that they just know better. It seems that everyone thinks they know better than a single woman doing her own work without the help of a man.

Without going into details of what happened, I was insistent on going the whole way alone. Even though I knew he was trying to swindle me, I ended up paying the realtor an extra $2,000 just to put a stop to the endless discussion about how rates were now calculated differently since the dollar gained value.

Now I’m a single woman living alone in the city center with permission from the security department, which gives me the peace of mind that for the time being I will be just fine. I don’t mind all the weird looks or being treated differently; in the end, I won the battle alone and got the house.

I don’t think I will even bother trying to befriend my neighbors, the shop owners and the officers at the military checkpoints in the neighborhood. They can all continue to wonder what I do, and ask themselves all their questions about this single woman. I don’t care. I got permission!

Farah (a pen name) is a young Syrian woman who lives in Syria’s capital city Damascus with her family. 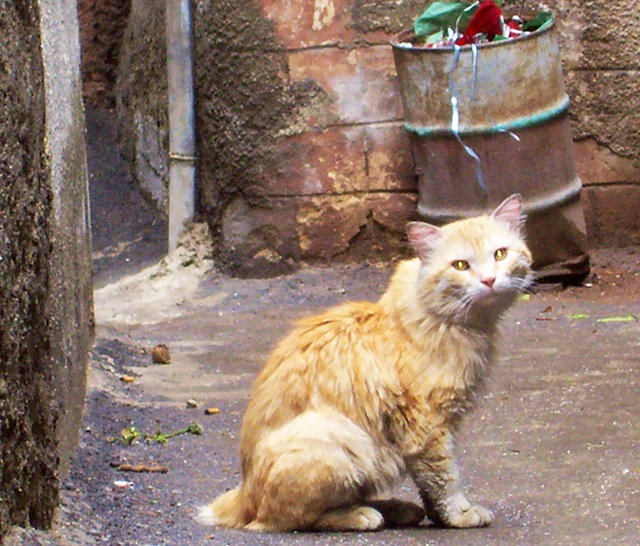 A stray cat in an alleyway in the center of the Syrian capital, Damascus. Farah