National Reconciliation and Protection of Minorities – by Salam Kawakibi

24In this new research paper, ARI’s Deputy Director, Salam Kawakibi analyses the Assad regime’s exploitation of sectarian and confessional divisions and deconstructs the myths used in its political rhetoric to gain power and present itself as the ultimate line of defence for minorities.

Kawakibi explains how the feeling of insecurity had developed among Christians from Syria long before 2011 uprising as the future of Christians in the region was seen under threat.  The “withdrawal” of ideologies as well as the weakening of secular movements, the abandonment of democratic experiences, the failure of attempts at socio-economic development and the increase of fundamentalist movements are some of the factors that now frighten Christians from Syria, or those who remain.

This situation was compounded by several myths the Assad regime has nurtured over the years, in particular that it is secular, that it belongs to an Alawi community and that Christians in Syria are more under threat than Muslims. At the same time, the regime has successfully suppressed and marginalized a struggling independent civil society, heightening a persistent risk of sectarian divisions.

To address the divisions created by the regime and reconstruct the Syrian state, Kawakibi presents a number of recommendations, including the need to: 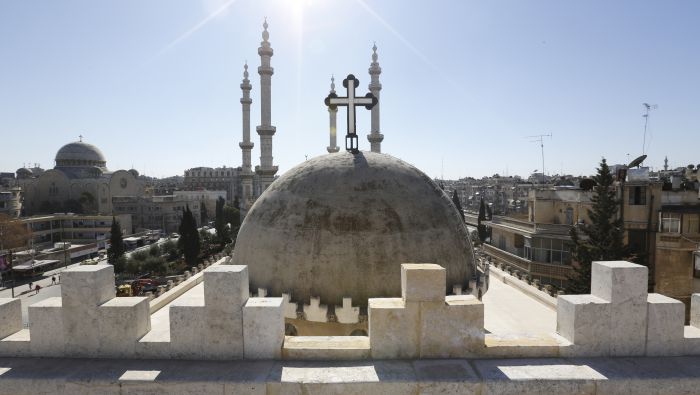 Photo: A general elevated view of a church and a mosque in Aleppo, northern Syria, 02 February 2017 ©, EPA