For Palestinian artist Alaa Minawi, six neon tubes are all it takes to deliver a powerful reminder of Europe’s refugee crisis.

“When people are forced to leave their country they don’t only lose their schools, toys and cars,” he says. “They drop their skin, organs and memories. They transform into outlines of human beings.”

Minawi, who lives in Lebanon, spent three years working as a translator for Syrian refugees who were applying for asylum in the United States.

“I heard almost 1,000 stories,” he says. “Most of them were traumatizing. For them, this interview is life-changing. It’s like the last rope you throw to a drowned person. My own perception of life changed after these interviews. You appreciate life differently, you see how these people want a future, how they are craving it. I felt I had to create something related to what I heard.” 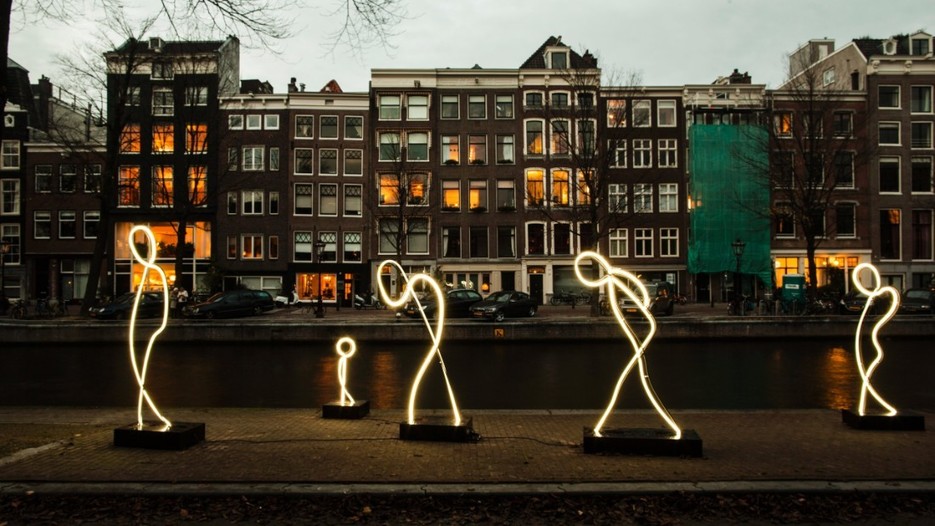 The resulting sculpture, called “My light is your light”, is a set of custom-made white neon lights that “look like extremely fragile human bones”. For Minawi, the entire piece is a stripped down version of one particular family in Lebanon whose story affected him deeply.

“They’re crossing the border,” Minawi says. “The father is in front watching out for the family. The grandfather trails behind him, bent over and exhausted. The mother is walking forward but looking down. The teenager has been left behind. He’s just as traumatized as everyone else, but they don’t notice. There’s also an aunt and a little child.”

A ‘thank you’ to Merkel
Like the Syrian refugees they represent, the six figures in Minawi’s installation are crossing borders all over Europe and beyond.

The work, which premiered at the Amsterdam Light Festival in 2013, has also been displayed in Beirut, Istanbul and most recently, at London’s Winter Lights at Canary Wharf festival. The sculpture proved so popular that it’s staying in London for two months longer than planned.

“I was surprised that the installation was wanted by so many places,” says Minawi. “Now I have a plan. I’m going to tour it around Portugal and Belgium, but then I’m hoping to sell it in Germany. I contacted Angela Merkel to do an auction together, but she’s really hard to reach. ”

So far, Minawi has written to the German Chancellor, the Minister for Refugees and has sent a long letter detailing his intentions to the German embassy in Beirut. He wants to work with the German government to exhibit and auction off the sculpture at the end of its European tour. Most of the money raised would go towards helping Syrian refugees in Germany.

“Angela Merkel was the first person who was brave enough to open the doors to refugees,” he says. “I appreciate what she did. I want this to be my contribution to her actions. Doing this would give the installation another value beyond delivering an emotional message.”

A message of hope for refugees
According to Minawi, the installation has a message not only for Europeans, but also for refugees themselves.

“I want to tell them that you shine light and you can move on,” he says. “There are five statues whose heads are all down. Except for the little kid.”

Unlike the older figures, the smallest child in the sculpture looks straight ahead, and was intended as a symbol of hope and resilience.

“Children always adapt,” Minawi says. “They’re stronger than what we think. This little boy was just running and he saw something that grabbed his attention. It’s enough for him to forget about what he’s been through.”

As a refugee himself, Minawi grew up listening to the stories of his grandfather, who fled Palestine in 1948.

“My grandfather owned five houses in Palestine,” he recalls. “But when he became a refugee, he lived in a tent in a graveyard in Beirut. It was a traumatic shift, but 60 years later we are back on our feet. I want refugees to know that things get better with time.”