No Space For Anger in Our Lives – by Qamar/Damascus Bureau, republished by The Syrian Observer 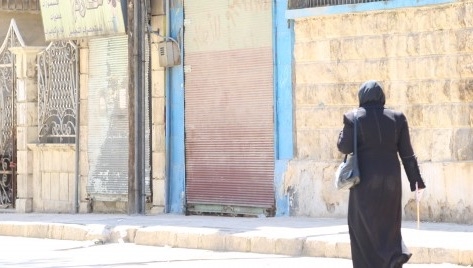 « I looked around, trying to figure out where the sound originated from, and realized it had come from my neighborhood. I ran back home, all thoughts of sorrow were replaced by fears for my family »

When I stormed out of my house on August 3, 2014, I was angry with my husband. We had argued about the meal I had cooked and I was so upset with him that I was in tears.

Our financial position had deteriorated since the revolution began in Syria. The siege of the Eastern Ghouta region by government forces had made matters even worse.

We used to own a factory, a car and considerable savings for our retirement, but all that was gone. We had sold every valuable item we owned to survive, even the factory machinery.

As our money disappeared and the cost of living grew higher, other troubles also increased.

Life was treating us harshly. We were all still suffering the fresh pain inflicted on us by the martyrdom of our son Khalil. The very foundations of our home seemed to be crumbling into pieces.

As I wandered aimlessly through the streets that day, the tears streaming down my face, I felt helpless. I didn’t know what to do or where to go. I thought of my elder brother – he would have looked after me; he always had. But he too was martyred a year earlier.

I came out of my reverie at the sound of a loud explosion. Government forces had launched another air strike on our town, Douma.

« I wish I had been killed by it and relieved of my misery, » I thought.

I looked around, trying to figure out where the sound originated from, and realized it had come from my neighborhood.

I ran back home, all thoughts of sorrow replaced by fears for my family. Another air strike hit the area, and the sound of ambulance sirens filled the streets.

When I finally reached my street, I was horrified by what I saw. Everywhere I looked, I saw destruction. I couldn’t believe this was the same street I had walked out of a short time earlier.

Smoke billowed out of the building where a coat shop had stood.

« Dear God, please let its kind young owner Mohammad be safe, » I mumbled in prayer. « Please God, let my family be safe, too. »

I ran to my own building and rushed up the stairs, colliding with my daughter who was running down. She was so traumatized that I found it difficult to understand what she was saying.

« We were all inside the house when the first raid happened, » she said as she wept. « We heard men calling out for medical assistance, and father ran down to help them. Then the second raid struck, and I don’t know what happened to him. »

I asked her about the rest of our family. She assured me they were safe, so I ordered her to go back upstairs, and ran out to search for my husband.

There was no sign of him on the streets, so I made my way towards the local medical center. A large crowd had gathered at the entrance, but the guards were not allowing anyone in. They didn’t want to obstruct the work of the paramedics.

They had a list with the names of those wounded persons who had been identified. I frantically searched for the name of my husband, but it wasn’t there.

My neighbor Abu Subhi was there, too, so I asked him whether he knew where my husband was. He told me he had been transported to a different medical center and offered to drive me there.

When we arrived, Abu Subhi asked me to wait in reception, and went looking for my husband. He came back soon after with grim news. My husband had been seriously injured and was undergoing surgery.

I almost fainted, and sank down in a chair, weeping. The pain I felt was unbearable.

As I sat there, I thought about what would happen to me if my husband died. How would I cope with another loss? How would I endure another tragedy?

I thought of the happy memories I had shared with my husband: the joy, the love, and the laughter.

I blamed myself for arguing with him earlier and leaving our home when both of us were still angry with one another. I had a vision of my martyred son smiling and greeting his father, taking him into his arms.

I thought of my remaining children, and realized they would be anxiously waiting for news of their father, so I found Abu Subhi and asked him to call them and explain what had happened.

Four hours later, a nurse came and told me my husband’s operation was over, and he was now in a ward where I could see him. She warned me that his injuries were the most severe they had dealt with that day.

I went to the ward and found him lying there, tubes protruding out of his body.

The doctor told me he had lost one eye and both of his legs from the knee down, and had a broken shoulder.

He told me that in addition to medical care, my husband would need psychological support to deal with the trauma he would suffer once he awoke from the anesthetic.

I sat down at my husband’s bedside and started crying. All I wanted was for him to wake up so I could apologize, tell him how much I loved him, and promise to stand by him.

I had been taught a cruel lesson that there was no longer space for anger in our lives. The risk of losing a loved one while not on speaking terms was simply too high.

Qamar al-Said is the pseudonym of a woman from Douma who had begun writing for IWPR’s Damascus Bureau before her death on November 19. She and a cousin were killed when a rocket landed near the farmhouse she was living in. Qamar was in her 40s, married with three daughters and three sons, one of whom was killed while working as a photographer with the Free Syrian Army.

We are publishing articles written by her as a tribute to her memory. Qamar is a pseudonym which we are continuing to use in the interests of her family’s security.

This story was republished by The Syrian Observer with special approval from the Damascus Bureau.