Olive Branch: Education as the Only Guarantee for the Future in Syria – Syria Untold 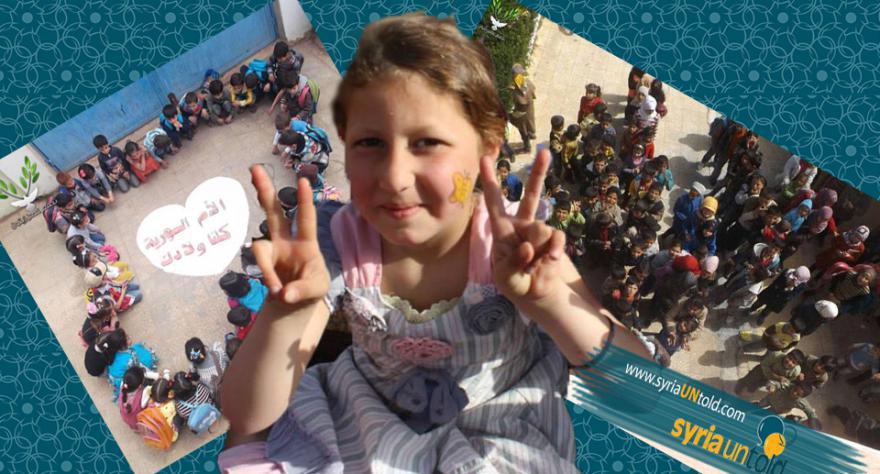 Olive trees have always been a symbol of Syria. They became associated to the Syrian uprising from its early stage, after demonstrators handed out olive branches and flowers to regime forces sent to repress them. This is what led a small group of activists from Daraa to name their project “Olive Branch”, with the aim to find space for civic work in an increasingly violent environment.

“We wanted to find a way to continue to do civil work, as we did in the beginning of the uprising”, one of the co-founders said to Syria Untold. He used to be a dentistry student before he was expelled by the University for his participation in the freedom protests that spread throughout the country since March 2011.

“We have lost many friends, like Iyad al-Haj Ali, who was instrumental in the peaceful and civic movement, before he joined the Free Syrian Army. He was killed, like many others. We think this is a huge loss, such a big part of our youth that could contribute to the revolution in other ways.”

“My Room Is My Classroom” was the first campaign in which they collaborated, teaching children and young people who could not attend school for security reasons in their own households. The situation became increasingly unbearable, as the teachers with whom the group collaborated got arrested or had to discontinue the project for personal reasons.

Children outside of one of the Olive Branch buildings, in Daraa. Source: Syria Untold/Olive Branch’s facebook page.

Months later, with ten thousand pounds out of their own pockets, the activists launched “We Want to Live”, which calls for the most fundamental of rights, the right of children to live. Out of this initial campaign, others were born, such as “I Want to Play and Draw”, which included a contest and an exhibition that was later taken to other areas of the country; and the “New Hope through Children’s Laughter” campaign, which not only focused on making children forget the hardships they have been facing but also on their families.

“We had not seen our children play and laugh for a long time”, one of the parents said, and insisted that more similar activities be organized. The group, however, had to discontinue many of the initiatives due to lack of funding.

“Olive Branch” took a step forward when a crowdfunding campaign was set to support its projects, in December 2013. Through donations from friends in Lebanon, they managed to establish the first “Olive Branch Educational Center”, which includes a kindergarten, an elementary school and a children’s club. The founders take pride in the fact that these centers, which more than 1000 children attend, “are better than state-owned schools have ever been.” The team’s next goal is to establish an “Olive Branch” center for people with special needs, which are tragically increasing in number throughout the country.

Although their main focus is on children, the “Olive Branch” team engages in other activities such as planting trees, “which is necessary and provides a productive and healthy activity for the children and their families to partake in”; and “Don’t forget the winter has started”, which consisted of distributing blankets and warm clothing to Syrians and Syrian Palestinians who were denied entry to Jordan because of their Palestinian background.

The biggest challenge the team faces lies in the need to protect the children, as they continue to suffer shellings and attacks in an increasingly militarized environment. To this end, they coordinate with civil defense groups and armed groups to ensure protection for the schools, and the school buses on their routes.

“Parents are terrified that they will lose their children while they were sitting at home and could do nothing to protect them”, one of the co-founders explains. “We need to ensure at least some sort of protection, or else they will stay at home, isolated from the world, from the future that an education can provide, which is a slower form of death.”

The team keeps a comprehensive archive of its educational work, from the number of students to grade records, in hope that these school records can be official in the near future. Even if this did not materialize, their efforts manage to prepare the children to take exams in any official school throughout the country, since the Syrian educational system does not require students to attend classes in order to sit an exam in elementary and secondary school. Therefore, they follow the official curriculum, introducing some slight adjustments only. “Our educational system is Syrian, and it does not belong to the regime. It is civil and inclusive of the diversity of our country”, they sustain.

Today, “Olive Branch” employs 45 teachers, which get paid around 100 dollars for their work, all of it through donations from community and civil society organizations. The team makes a huge effort to guarantee their salaries, as the only way to ensure the sustainability of the project.

“Olive Branch” has managed to remain independent. In their own words, they are “free from international interference and from the extremist groups which have targeted other areas.” They add:

“Daraa remains attached to the values it has always had: a peaceful civic-based town which has never known extremism, whatever the official discourse says. Today we are doing this work in Syria. Hopefully, tomorrow we will do it elsewhere, offering our teachers and our experience in Somalia, or in any other country where children are affected by conflict.”

Children show their notebooks during one of the classes at the Olive Branch center. Source: Syria Untold/Olive Branch’s facebook page.

This article was originally published by the website Syria Untold on April 24th, 2014. Adopt a Revolution has helped funding the highly important work of Olive Branch. Ever since its founding in late 2011, Adopt a Revolution has worked with many civil society groups such as Olive Branch that engage in crucial civil society work. Daraa is the city in which the Syrian protest movement of 2011 began – and spread throughout the country. In this sense, the work of Olive Branch is not only important for Daraa but also other regions of Syria. Help support the work of this group and others alike by donating – despite all the hardships they are facing in Syria, the activists continue their work to create alternatives to oppression and destitution. You can support the work of Olive Branch and other groups through our website.