On Aleppo: A Letter to a Historian in the Future – by Samer Frangie

You might receive an invitation to a conference exploring the root causes of the collapse of the Middle East. Or perhaps you are simply interested in studying this region, home to your people before the collapse that prompted their exile and migration. Or maybe you are just curious about events that took place half a century ago. I do not know, but in any case you will one day return to this pivotal year in order to understand your present, a present that has been forged out of this collapse. You will visit a library and find hundreds of books about the causes of the collapse: the rise of ethnic identities, the economic recessions, the collapse of the “illusion” that we once called the ‘center’.

Your present may have reconciled itself to the rule of the extreme right and normalized its racist ideology. I do not know. It is also possible that this wave has already passed, following the wars and the destruction it caused, and your research has led you to hold previous generations accountable for the rise of that wave. I do not know.

In any case, you will only be able to revisit this period through the bookshelves that separate your present from your past, or our present. You will find numerous studies written about the “Arab Spring” and many more next to them about the “Arab Fall.” You can simply ignore them. They were hastily written and exclusively meant to secure some fame for intellectuals whose only breakthrough was the play on the notions of spring and fall. 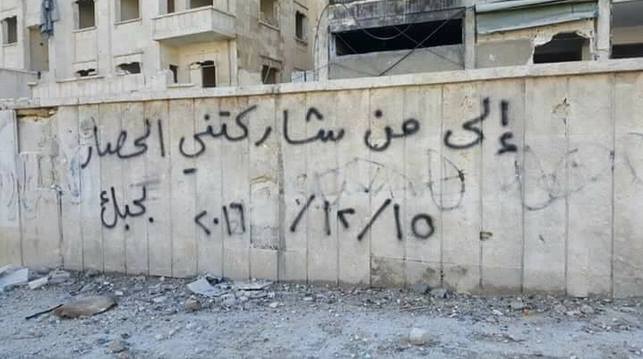 “To the girl who shared the siege with me: I love you”. Eastern Aleppo, December 15, 2016. Photo by Salih Abo Qusay. Used with Permission.

You may also ignore another bookshelf, the one with the books in black covers about a group we called “Daesh,” of which you may not have heard. This fundamentalist group constituted the fabric of all of our obsessions before we discovered that the wars we waged against it endured for decades after its demise, and even after it faded from our memories. Back then, we produced loads of books to frighten ourselves because we were slightly bored and we found something that could both terrify and exhilarate us.

On the other hand, you will not find many books about Syria, that country that was at the roots of what you now might be calling “Useful Syria.” The few books that you will find talk of a revolution that started in 2011 before it “deviated” from its noble course. You will not find many studies on this topic for the years 2011-2016, because it was a “complicated” period for the intellectuals of our time who could not understand what was going on. And so they preferred to remain silent – the only time they chose to halt the endless mill of speech. Following this period of silence, you will find a torrent of studies about the need for dialogue, reconciliation, and the reconstruction of Aleppo, the city that was inaugurated after its reconstruction by the son of the late president Bashar Al-Assad. You may think there is little of research interest here, nothing more than the garden variety disputes of a country ruled by a ‘progressive’ tyrant. Once, there existed backward tribes that staged a rural revolt against the urban centers, co-opting the mosques to eliminate pluralism, all because of the drought. This is what the Arabic language teacher at the University of Damascus will tell you when you visit this city where tradition and modernity meet, as the billboard in the airport proudly indicates. This is also what your dissertation supervisor will confirm as he steers you to more important research questions such as the orientalist discourse in car advertisements, or the role the west played in the Arab revolutions. In most likelihood, Russian imperialism would not yet have been elevated to the status of a research topic.

The scenario could be different. You might have heard of Aleppo and its destruction. Perhaps, this city, or one of its neighborhoods, would have gone down in history alongside Guernica, Dresden, or Deir Yassin as icons of destruction and murder, only serving as harbingers of the dark times lying ahead. You may find some oil sketches here or some verses of poetry there speaking of this city. You might stumble upon such verses in your search for some imagery to use in the introduction of your dissertation. And the question you never asked your parents, but which has haunted you, will come back: “How did you consent to such destruction, killing and displacement?” Therein lies the advice of this letter: Stop at this question, at Aleppo and at the Syrian revolution. For this is where the story began. From the vantage point of your present, you might not be able to see the pivotal importance of the Syrian Revolution, for the silence of which I spoke earlier would have squandered it. You may find numerous writings accusing those who used the word “revolution” of appealing to an ideology that contradicted reality, and from your perspective, this accusation may seem valid. But today, 50 years before you read this letter, Aleppo is burning. And the term “revolution” is all we have left so that we do not participate in this murder. So forgive us our misuse of these concepts.

Go back to Aleppo and ask us why we acquiesced. Do not waste your time searching for a connection between the price of oil and the massacres, or the growth of the Russian empire and the destruction, or even on metaphysical analyses of discourse and its inherent complexities. Do not delve deep and simply ask us how we acquiesced. Do not hold us responsible because you too could have accepted the destruction as we did. But do not forgive us either. Stay at the surface where you will find everything you need. If a text or a book tells you that we did not know, be sure that is falsehood. Do not feel that your distance from the events disqualifies you from being certain of that. We knew. We understood. We all knew the names of the dead. We have photos of every martyred infant and videos of every wounded who fell. And we have farewell letters written moment before the fall. You are not likely to find them in your library, but they were available to us. The people of Aleppo tried to communicate with us by letters, by photos, by videos, by prayers, by jokes and by screams. But for some reason, we did not respond. We knew, so do not abandon your question: How did you let it happen?

Stay at the surface, for Aleppo’s moment was the moment that the world decided to compress and release all that was below the surface. Perhaps you have not lived through moments like these, and you are fortunate, for these were dark moments. Aleppo was the moment the world decided it had tired of even going through the motions. It was the moment a clown was elected President, a tyrant became the free world’s champion, and world leaders competed to abet a criminal. You might not understand how we hit rock bottom. We did not understand either. But we knew. After this moment, all shame was lost when the institutions had already collapsed and violence had become the norm. If you are interested in the collapse, do not go far or deep, stay at Aleppo’s ravaged surface and you will understand how all can be lost in a single moment.

I cannot predict what will have taken place between this letter and your present. Perhaps the world will have learned from Aleppo and awoken from this madness. Perhaps this madness will have led to wars which compelled the world to face its moment of abandonment. But perhaps all of this will not have happened, and you will still be living in a world which thinks the Assads are the best this region can offer. I do not know. What is certain, in any of these cases, is that this region has collapsed. And if there is still one thing that we can pass on to you from all this rubble, it is this: Remember Aleppo, not as an icon of impossible heroisms or the necessary price for an ideological revolution, but as a moment, a moment when the world decided in full awareness and in cold blood to give up on itself.

Samer Frangie is Director of the Center for Arab and Middle Eastern Studies (CAMES) and Associate Professor at the Department of Political Studies and Public Administration (PSPA), both at the American University of Beirut. His research and teaching interest includes the intellectual and political histories of the modern Middle East and contemporary social theory. He has published a number of articles on the intellectual history of the Arab Left and is currently working on a book manuscript on the memory of the left. Aside from his academic work, he has published extensively in the Arab press.