On Hassan Hassan, or the most beautiful place on earth, Yarmouk Camp! by Salim Salamah 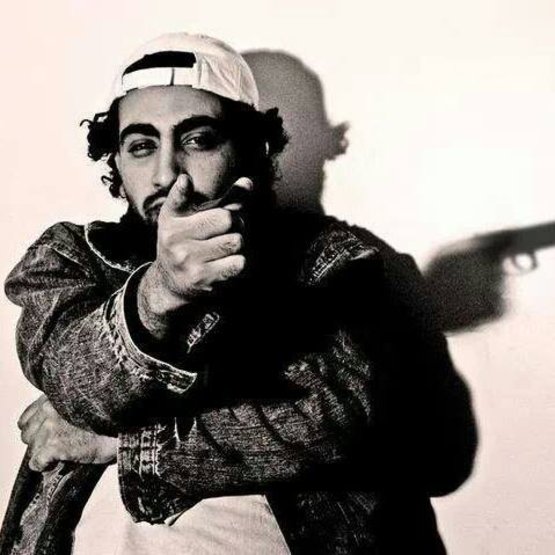 A million thanks for the help of Mary Hassan Ali Rizzo in this piece.

(Whoever tells his story, inherits the land of speech and thus possesses the key to the meaningful)

I dedicate this text to Hassan’s wife, the one who will cry the most.

A few years ago, a handsome man coming from the Palestinian refugee camp of Yarmouk, 7 KM south of Damascus, came into the audition room and performed a piece he wrote, or maybe a scene he liked from the words of leading Syrian playwright Saadallah Wanous, or maybe just stood there and narrated in a childlike and amusing way his desire to become an actor, that man was Hassan Hassan.

A blog can’t introduce Hassan, not even a small or fair description of who this man is. But this man is Hassan Hassan, the prominent young Syrian Palestinian actor who was turned down by the selection committee of the Higher Institute of Dramatic Arts that day. Hassan, a third generation Palestinian refugee, born and raised in Damascus, marginalized and smashed by the (progressive) developmental elitist policies of Assad and his group of advisors. This is Hassan.

Today Hassan was murdered, murdered by those who pretended to work for the liberation of his occupied homeland “Palestine”, killed by the so-called regime of resistance and anti-imperialism, the 14 security branches of Bashar Al Assad killed him and more accurately, “the military intelligence branch” after arresting him in early October 2013 when he was attempting to leave the camp with his wife, who was released several days after her arrest.

He couldn’t stand this insanity; he was obsessed with finding out new ways to let this energy out of him. So Hassan founded the group “The Palestinian Assembly for Creativity: reaction” with his friends as a reaction to all the mess around him and his world, the camp!

Hassan, who many years ago play a role in a masterpiece play “7 minutes only” written by Palestinian journalist and writer Motawali Abo Naser, which had been performed on many important stages in Damascus, Hassan struggled to make his way outside the borders of the camp, the social exclusion and the untold stories of discrimination towards “the others”, who came here in 1948 and speak this strange accent, “Hey Brother”! “7 minutes only” was described by close friends of Hassan on Facebook as “a head start of Palestinian theater in Syria”.

He mastered the art of “stand-up comedy”, but he added the necessary Syrian /Palestinian touch to it: “Politics” and documented turning points in the life of Yarmouk and the southern sector of Damascus by writing and directing pieces dealing with a variety of topics from the continuous arbitrary shelling and the great losses in our community of many important activists such as Ahmad Kousa and Mounir Al Khatib from Basmeh Social Foundation to the emerging humanitarian crisis caused by the siege.

On “reaction” page on YouTube, there is a short descriptive video In Arabic entitled “who are we ?”. It opens with a word from Hassan Tanji, a promising filmmaker who also hails from Yarmouk: “We were three persons and the idea started after we saw the flourishing of internet programs. Abo Gabi (singer and actor from the camp) adds: “Reaction is an opportunity for all the Palestinian and non-Palestinian youth to express themselves, the most important thing about “reaction” is the stage we offer to youth in order to express what they want.”

Hassan added: “We wanted to offer a platform; it’s a time of intensity in the business of cinema, TV and visual arts, and it’s not easy to reach out to people in these times, we don’t have a TV station, we have a YouTube Channel and you need to make people come and watch you.”

The “Reaction” account contains dozens of videos, thousands of thousands of views (228.000 views) in all, and a small message under the video says: “Yarmouk Camp is very famous for its culture and artistic activity, it gathers a rich mix of exiled Palestinians, Syrians and others, a camp only by name, artistic image has its clear identity and generations of young artists started to take shape here, from photography to theater and cinema, and from this came the idea of “Reaction” as a visual expression of this rich reality”.

Hassan’s first documentary movie “Top Floor” received the support of the Bidayyat documentary film grant 2013 . Hassan describes the movie as such: “For more than a decade, the sun and rain have been falling on the tin roof of my little room, thus telling me stories about myself”. Part of the culture of early adolescence in Yarmouk Camp is a small revolution inside every house, where the son starts to demand his own room, most of the time it’s the one on “The Fourth Floor”! The illegal little slum room on the roof of the building. Hassan adds: “Telling the story of my adolescence and the beginning of my consciousness, my first love, the fascination I had for pictures: posters from theatre plays in the national theatre, leaflets of Latin-American movies and cinema stars. Extracts of the famous poet Mahmoud Darwish (Who tells his story, inherits the land of speech and thus possesses the key to the meaningful) and the generation of the playwright Saadallah Wanous which was doomed to only dream of change.

I’m not exaggerating if I say that this room, my room, is like a miniature of my home country: Every day, the sun rises at its door and every evening, the suns sets at the window, turning the day of incendiary summer into a dark, cold winter night.”

One of the most important works of Reaction in my opinion is a video titled: “Faces from Yarmouk ”: not for its artistically outstanding production, which can be examined by a critic, but for the intensive act of documentation expressed in this video that lasts for 3 and a half minutes; this intensive act of documentation narrated the history of the space and place through the faces of its inhabitants, their smiles, hopes, aspirations. And the very sensitive time in the life of the camp because the footage was shot before Yarmouk was shelled by a MiG aircraft in December 2012, according to the video description: “Since then, the camp, along with the rest of South Damascus, has been under strict blockade, which has completed the destruction that the MiG began”.

I don’t want to return alone!