On Street Child Day, Syrian Students Say ‘We Belong in the Classroom – by Preethi Nallu

On International Street Children’s Day, Refugees Deeply speaks to Syrian students in Lebanon, some who had previously been out of school and on the streets for years, about the importance of education in their young lives.

JAMAL AL-IBRAHIM IS perplexed when asked if he thinks he should be working on the streets of Beirut. “Of course not. I should be in school, but I also need to provide for my family,” he says. 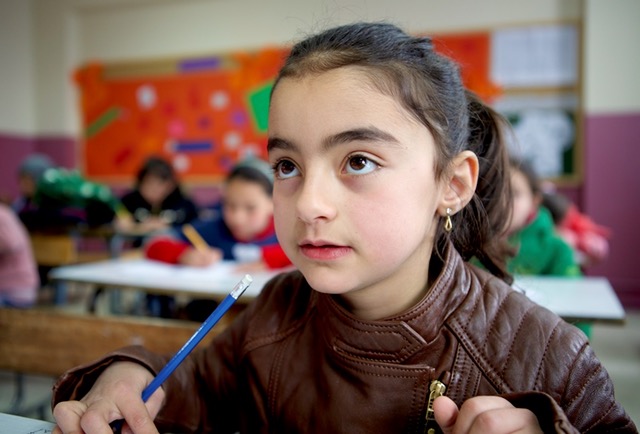 Now 13, Jamal, one of the 1,500 documented street child workers in Lebanon, started working the streets aged nine. Last year, a local NGOstarted helping him with catch-up classes so that he might qualify to enroll in an official school – provided there is space.

Syrian child workers in Lebanon, especially boys, often say they work instead of going to school out of their own volition. Many feel a sense of responsibility to help provide for the rest of their families, especially when their fathers and older siblings are absent.

As the world marks International Street Children’s Day on April 12, there has been some success in reducing child labor among Syrian children. In 2017, children like Jamal have a much better chance of being admitted in public schools in countries neighboring Syria, where the majority of Syria’s displaced populations live.

Thirteen year-old Ibrahim al-Jamal speaks about working in the streets to support his family and being able resume his studies recently through a local NGO. Preethi Nallu/Theirworld

Last year, international and regional country donors gathered in Londonpledged the highest amount of aid ever promised at a single event. Theircentral objective was to “put one million Syrian refugee children in school within a year.”

While part of that promise has materialized, reports show that at least 530,000 Syrian refugee children have never set foot in a classroom. Many of them work on the streets to support their families, begging or selling things like pencils or gum. There are at least half a million unregistered Syrians in Lebanon, including many minors, who do not figure in official statistics. Their population is growing, unaccounted for and increasingly vulnerable.

Refugees Deeply met some of the Syrian students who have entered Lebanese public schools and whose education, integration and social and nutritional needs are being tracked by U.K.-based charity Theirworld. The children shared their experiences of returning to school, the unfolding impact of education on their lives, and the changes they feel in the confines of their classrooms. 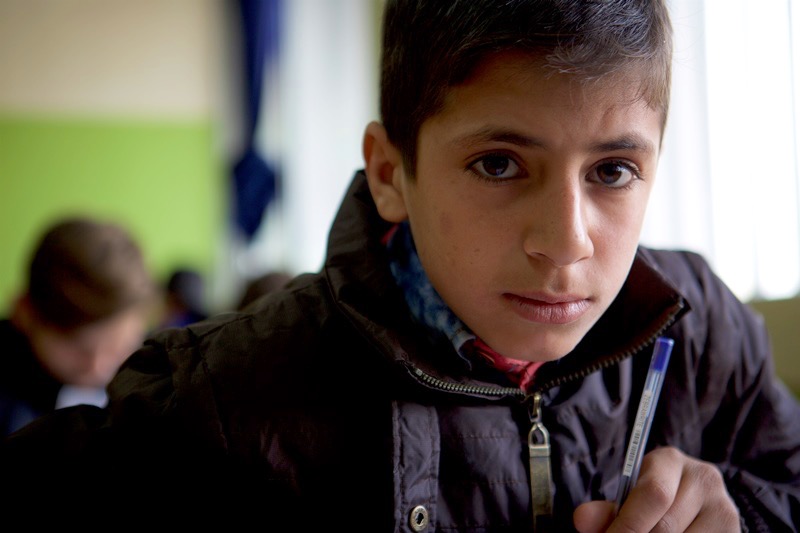 Nine year-old Mohammad Domrani, from Homs, is seen taking an exam at a public school in Taalabayah district of Lebanon. (Preethi Nallu/Theirworld)

Nine year-old Mohammad has worried eyes and appears more mature than his classmates. An introverted but studious boy, he is indeed older than a lot of his fellow students but also has an “old soul,” according to his teachers. His favorite book these days is an Arabic language saga of a refugee family that had to travel far in pursuit of a new home. It reminds him of his own story.

Due to differences between the educational systems in Syria and Lebanon and lack of documentation of his prior school work, Mohammad has had to repeat two years of school. Nevertheless, he is confident he will make up the lost time and does not allow it “to get in the way of enjoying what he is learning.” He knows other kids who work in the streets and does not think he would survive such conditions because of his “mild disposition.” He has been attending school regularly for the past three years. 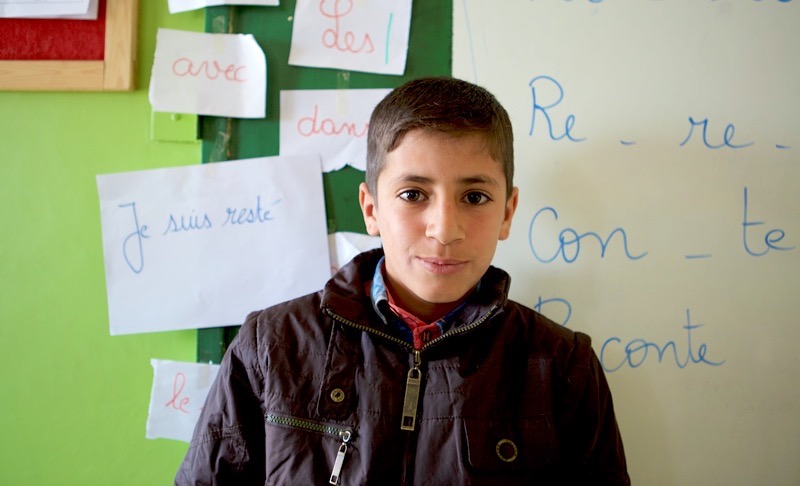 Being a refugee is just one stage of life, he said. “One can overcome it.” His plan is to study hard and work on learning languages. “They open up new worlds,” he says. While he is learning French and English at school, Arabic will always sound “the sweetest,” he says.

Having been in Lebanon for the past four years, Mohammad’s memories of his home in Moadamiya, in southern Syria, are starting to fade. With seven brothers and a sister, he was raised by a large family.

But he has hung on to a family tradition that was a source of much comfort and warmth – visiting his grandparents in the village on the weekends. When asked what he liked about it, he says: “I loved everything – the shade of the trees, the furniture inside the house, sitting on my grandparents’ laps, playing with my cousins and friends in the courtyard.” Mohammad’s grandparents decided they were too old to move away and stayed behind in Syria. He often frets that he might not see them again. 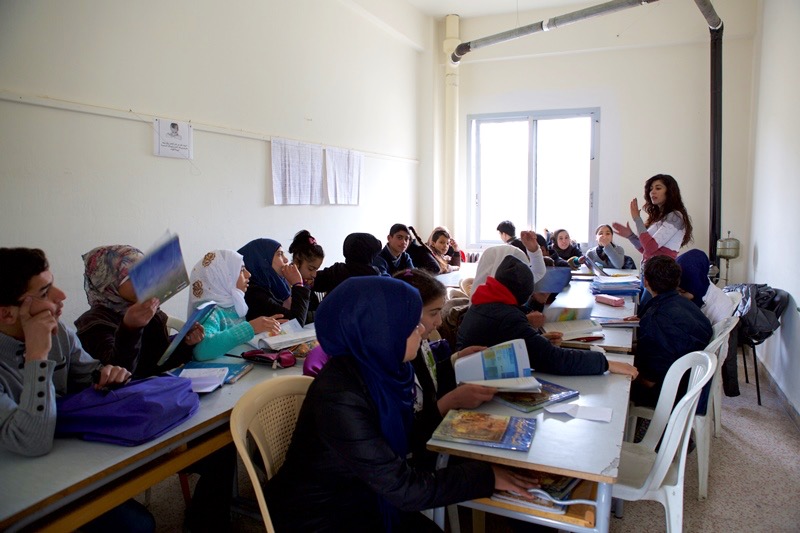 Abdul el Hafiz attends “second-shift” classes at a public school in the Mtein district of Lebanon. The afternoon classes have been set up through a government program to accommodate Syrian refugee children. (Preethi Nallu/Theirworld)

Fifteen year-old Abdul el-Hafiz is well known among his teachers for his “impeccable manners” and his gentle demeanor inside and outside the classroom. At the age of 11, Hafiz started working in a supermarket to support his family. He was quick to clarify that the decision to work was his own, as a “responsible” male member of the household. Originally from Hama, he and his family have lived in Lebanon for six years.

“I wanted to work, to be able to support my father who had the burden of providing for the entire family with little,” Hafiz explains. He also takes care of his two younger siblings at home. His older brothers work full time in Beirut.

When asked about memories of his school in Syria, Hafiz recalled it with a sense of fondness and longing. “It was a safe, beautiful space,” he says. But the worsening Syrian conflict meant that he and his family had to make tough decisions. They migrated to Lebanon largely because of his father’s political background that posed a threat to the family’s safety.

With vivid memories of the 1982 massacre in Hama, Hafiz’s father did not want to risk staying. Despite being born two decades later, it is clear from Hafiz’s explanation that the episode, which claimed thousands of Syrian lives, is present in the narratives of even the youngest residents of the city.

Leaving Syria meant that Hafiz’s education, friendships and community came to an abrupt halt. He bid goodbye to his friends, not knowing when he would see them again.

“They are now spread across the region, between Jordan and Turkey and I am in Lebanon,” Hafiz says. With no possibility of returning to his hometown, he has lost touch with most of them. The bonds with his close-knit community have withered over time. 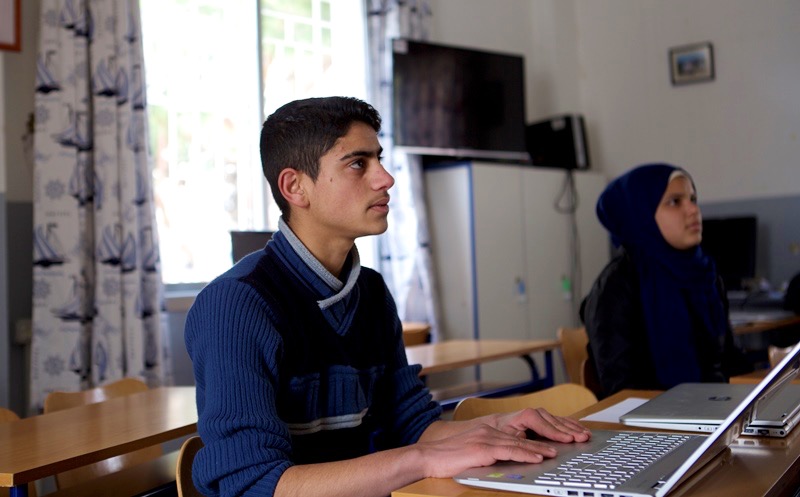 Abdul and Ilaf actively use computers for their classroom lessons at their school in Mtein, Lebanon. (Preethi Nallu/Theirworld)

The teenager’s face lights up when asked about computers. He uses the tech lab at his school for geometry and practicing languages – French and English, in addition to Arabic. While he likes all subjects, Arabic holds a special place in his heart since it reminds him of his home and culture.

Despite being away from Syria, the country is a daily topic in his household. His family regularly talks about the relatives who remain inside the country. He would like to return to visit his home and neighborhood, but does not think it will be possible anytime soon. Meanwhile, Hafiz wants to do well in school and focus on building his academic future. He is acutely aware that any profession that he pursues will require proficiency in I.T.

“The classroom is a safe space” 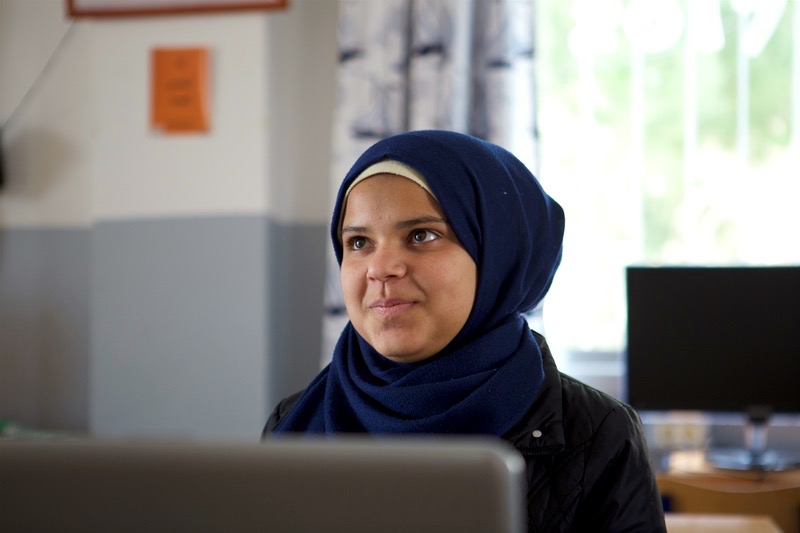 Ilaf Okla is confident that the “classroom is the safest space” for her. (Preethi Nallu/Theirworld)

Fourteen year-old Ilaf Okla, also from Hama, starts to tear up as she hears Abdul’s descriptions of their home city.

“I miss Syria very much,” she says. At the same time she insists she cannot remember anything about home and says, “I often struggle with remembering simple details about my life in Syria.” She would like to return someday. Despite living in Lebanon with her family she does not feel at home. Her teachers mention that she may have suppressed difficult memories, which make moving on and readjusting to new realities a challenge.

She missed school for two years and is happy to be back in the classroom in Lebanon. Although she has had to retake some classes, Okla is thankful to be able to continue her education. Two of her siblings attend the same school. Her two older brothers were not able to finish their higher education. They work full time to support the family.

Living with six siblings in a small home, where she and her mother take care of the youngest children, Okla has found school to be a place where she can focus on her own priorities. “School is a safe space for me,” she explains. 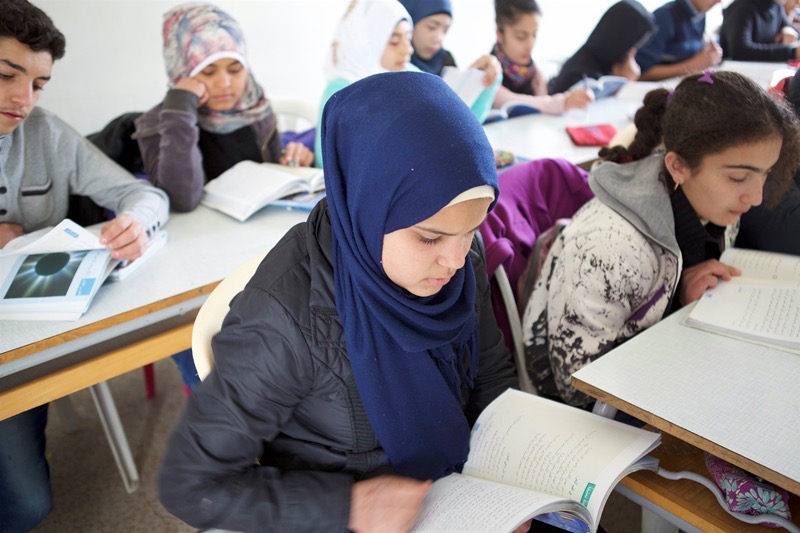 Ilaf is seen in her classroom, studying alongside her peers. (Preethi Nallu/Theirworld)

Her favorite subject is math and she would like to work with numbers and teach numeracy. Unlike the boys in her family, Okla has never worked because, it was “not appropriate” for her to be out of the home for long hours.

Despite wanting to use technology for her studies, Okla is reticent to use computers, partly because she is not used to them. Unlike the boys in her family, who have access to the web and computers through local gaming centers, Okla and others adolescent girls in the class are unable to use technology outside the classroom due to social restrictions.

“I love photos and art” 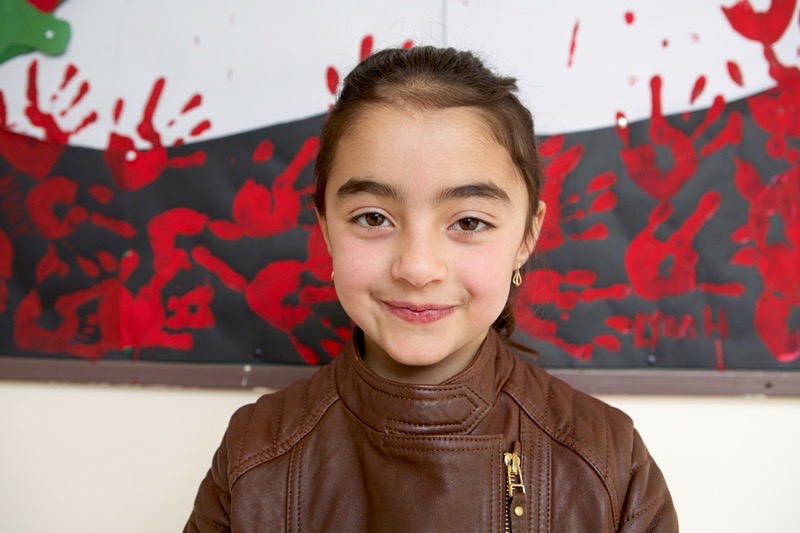 Shahed stands in front an art project outside her classroom at a public school in Taalabaya, Lebanon. (Preethi Nallu/Theirworld)

In comparison to her older peers, 7-year-old Shahed al-Orabi has adjusted to her school and her life in Lebanon very well, and says she has not had any difficulties with studies or making friends. Most of her early memories are associated with Lebanon.

Her favorite breakfast is bread with zaatar (thyme) and labneh (strained yoghurt). She is particularly fond of zaatar from Syria, which is available in Lebanese markets.

“I love being in photos,” she says with a mischievous smile, readily posing for the camera. Orabi also loves art as it makes her happy and is different from other subjects at school. “I like expressing myself through drawings,” she says, excitedly pointing to the hand prints that her peers made as part of a school project.

Orabi started her studies at the school in Taalabaya, where she feels at home. Two of her older siblings also attend the same school and look after her, especially with homework and preparing for school in the mornings. She has three sisters and two brothers.

Her teachers say that Syrian children around Orabi’s age assimilate particularly well and often associate with being Lebanese rather than Syrian, although the two are culturally similar. For instance, given the subtle but distinguishable differences between Lebanese and Syrian Arabic, “Shahed’s Arabic sounds predominantly Lebanese,” her teacher says. 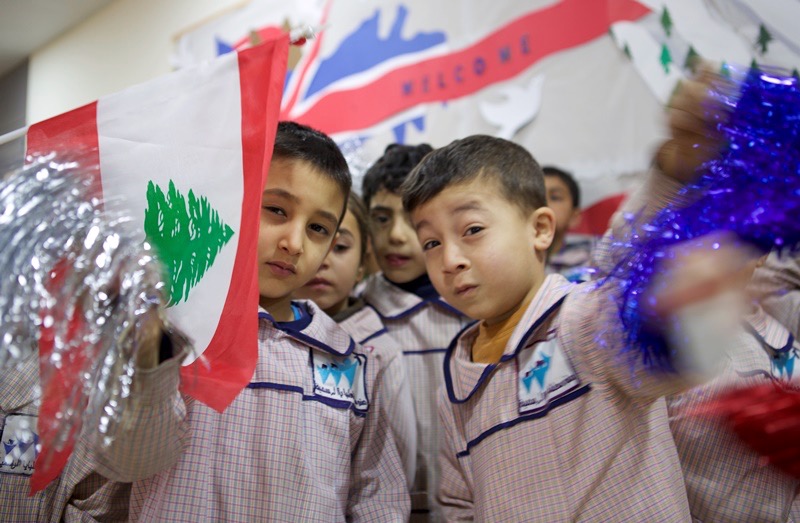 Students wave the Lebanese flag during celebrations at a public school in Taalabaya that holds a “second shift” for Syrian refugee children. (Preethi Nallu/Theirworld)

When asked about her hometown in Syria, she says she does not remember much other than her family’s description of her neighborhood in Homs as a “beautiful, green” place with a flowing river, a citadel and a large souk (market) that they would visit often. But she does remember having a garden and a dog.

Orabi was only 5 years old when she moved away from Syria. Orabi’s memories of her homeland are already turning into a “folklore,” according to her kindergarten teacher.

Access to the students was provided by the educational charity Theirworld with approval from their parents.

Theirworld’s work in Lebanon is supported by the People’s Postcode Lottery.