Organisers of first Syria protest – where are they now? – Sue Lloyd Roberts 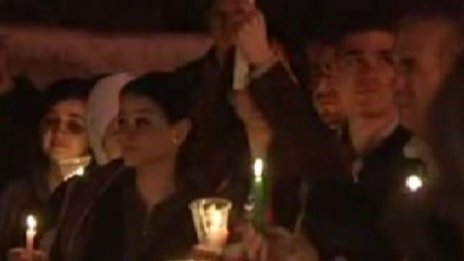 The very first Damascus protest was covered by Russian TV

They prepared placards, modest in their message, calling on the Egyptian army not to kill Egypt’s young people and adding « Yes to freedom! », and they posted an invitation on Facebook urging people to show their support by demonstrating outside the Egyptian embassy.

About 100 people turned up for the event, which at the time was only filmed by a Russian TV crew.

Now, with their country riven by violence Newsnight has tracked down three of those pioneer protesters to find out what has happened to them since.

Most of those who attended that first demonstration remain in Syria, many of them are in hiding, filming when they can and fighting. 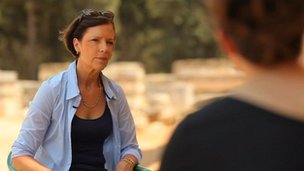 Maya Milani, one of the six organisers is also still there, despite being known to the security forces and having been arrested in the past – just like the other five.

In order to talk to BBC Newsnight Maya managed to cross the border into Lebanon.

« I never know when they will let me cross the border or whether they will send me back, » she said. « It depends on their mood. »

We met in what was once a popular tourist attraction, an archaeological site offering fine classical remains, but which is now largely deserted and, she hoped, free from the Syrian spies known to frequent more crowded areas in Lebanon.

« All of us have been arrested at some point and those of us still in Syria are always ready, with our papers prepared, expecting a phone call or a knock on the door and ready to flee. »

She works as a documentary filmmaker, sending images of the plight of her people to broadcasters around the world, including the BBC.

When asked to recall that first protest she said: « We thought we were safe demonstrating on behalf of the Egyptians. After all, the Syrian regime believed that Mubarak was the ‘great traitor’ for his dealings with Israel and they also wanted him to go. We thought we were on safe ground. »

« We staged a candlelit procession and then the more enthusiastic among us started shouting about the winds of change, » she added. « This was too much for the police. They threatened us, confiscated cameras and even arrested a few of us. »

Despite this early warning of what was to come she said she has been shocked by how fast the country has disintegrated: « We were hoping for the same success as in Egypt, but thought that it would take us a few years. I never expected everything to flare up in a few weeks, » she said.

Nor did she expect the violent response of the regime. After Hamza al-Khatib, a 13-year-old boy whom protesters say was brutally tortured, died in custody following a demonstration in Deraa in March 2011, she expected President Bashar al-Assad to apologise:

« Even his supporters were shocked by that first speech in which he said he they would hunt down the country’s saboteurs. We were really overwhelmed by the reaction, by the violence of the regime. »

Now, the army has started attacking the suburbs of Damascus and she faces violence on her own doorstep: « Too many helicopters going around, random shots, snipers, shooting at everything that moves, » she said.

On one occasion she had a very close call: « I didn’t notice the bullet come through the window because it was open so there was no broken glass… Only the next morning, when I woke up, I saw the bullet hole above my bed, » she explained.

As Maya left to return to Damascus; returning to the constant threat of arrest or worse, I asked her if she could be granted a single wish for her country, what it would be.

« I would like to wake up tomorrow and not find a single one of them [Assad’s supporters]. That would be perfect. »

In order to protect her anonymity, Maya’s name was changed for the purpose of this interview.

Amer remembers painting the poster slogans the night before the demonstration: « I wrote Yes to Freedom and No to Killing the Egyptian People, » he recalled. « The Tunisians had already been freed. The Egyptians were on their way to be free. We thought it was our turn to be free too. »

I met him in a small village outside the German city Cologne. After that first gathering in Damascus he attended many more demonstrations in Syria, was arrested and released, and then went into hiding. 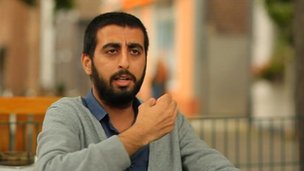 As a result of his ongoing political activities the Mukhabarat, Syria’s military police, started looking for him and, in order to get to him, they arrested his father. Amer fled Syria in April this year; his father has since been released.

Looking around at old couples strolling arm in arm in the afternoon sun and children playing on their bikes, he spoke of the contrast to life back home:

« When I came to Europe, I was amazed by the way people live here. I realised that we are living in hell in Syria under Assad… Hardly anyone in the country has not had either his brother of his father arrested. He is suffocating us. »

While waiting for his refugee status to be confirmed he is living in a hostel as the guest of a German charity and he said that he had to hurry back that night as he had friends coming from Berlin and Paris – members of the opposition in exile, the Syrian National Council.

They talk together of the battles being fought back home, who has been arrested, who has managed to flee and will be joining them shortly – conversations replicated by forlorn groups of Syrian refugees scattered across the world today.

His friends are Sunnis, Druze, Christians and Kurds. « This is how it was meant to be, » Amer said. He gets angry with the media’s obsession, as he calls it, with a sectarian civil war in Syria:

« Right now, there is no civil war in Syria. There is a war between a military regime that is slaughtering us and a people who are being slaughtered. The security people and the army come from all sects in Syria and so do the people. We’re fed up of people telling us this is a civil war. »

But he acknowledges that it is now war. He blames the regime for not listening to their first, modest requests and for militarising the uprising.

Amer has his parents’ permission to return to Syria, despite the possibility that his father might be arrested again. « I am definitely ready to die », he said. « I and my friends and many of the Syrian people are prepared to risk death just to see Assad go. Definitely, definitely it’s worth dying for. »

Once the uprising began filmmaker Bassel Shehadeh did his best to show the world outside the reality of living in a country being torn apart.

His film Children Of My City shows children in Homs left without parents and homes, now forced to fend for themselves by scavenging and working as street vendors. But the authorities did not like what he was doing; he was arrested last year and fled abroad. 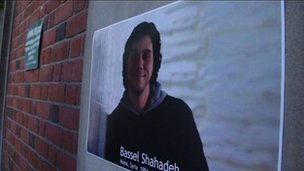 Bassel won a Fulbright scholarship to Syracuse University in the US

The tutors at Syracuse University in New York State were more impressed by his work, awarding him a Fulbright scholarship. He signed up for a course in cinematography, but did not last.

« How could he go to classes and pop out for a coffee like all the other students? » Mireille Bakhos, a fellow Syracuse student from Lebanon explained. « He knew people back home were dying and he had to go back. That was how he saw it. It was not guilt, it was love that made him return. »

« Everyone tried to persuade him to stay, but coming from the Middle East myself, I understand – you don’t want to be part of a world which is watching and not doing anything, » said another student, Lana Hijazi from the Palestinian Territories.

Bassel returned to Homs earlier this year and was making a short film entitled I Will Cross Tomorrow, filming himself ducking snipers to cross a street, illustrating the risks that ordinary people faced in order to buy a loaf of bread. He made it across the road safely, but on 28 May 2012 a Syrian army shell landed on the house he was sheltering in and he died. He was 28 years old.

In Damascus, hundreds of his friends demonstrated in the streets in his memory. Bassel was a Christian and his local priest wanted to give him a proper funeral service in the church but was prevented from doing so by the authorities, so the mourners gathered outside the church instead.

« At his funeral, the ones who prayed for him were from different religions and it didn’t matter if you prayed in a mosque or in a church for him, » Mireille said.

« It was so touching to see Syria in this way because this is what they are dying for – they are dying for a better Syria and not for country shredded into parts and religions. And it was sad that he couldn’t have a proper funeral. Bassel deserved more than this, » she added. 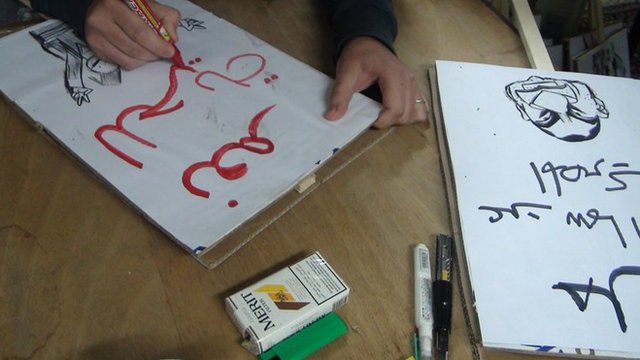