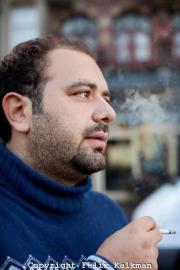 Shocking news! This text came in 5 hours ago from Diana el Jeiroudi, filmmaker, producer, co-founder of the Dox Box Film Festival in Damascus and partner of Orwa Nyrabia:

« Syrian film producer Orwa Nyrabia disappeared this afternoon on on his way heading to Cairo at 5:00 pm, on August 23, 2012. I lost contact with him soon after his arrival at Damascus International Airport. According to Egyptian Airlines, he did not board the plane, which indicates that he was arrested by the Syrian authorities at the airport. Orwa Nyrabia, born in 1977, is a film producer and the director of the DOX BOX Film Festival in Syria. »

Orwa Nyrabia is the one, who since March 2011 has collected and spread information about the atrocities and massacres on the civil population in Syria. Readers of filmkommentaren will know his name from the many postings we have done based on his reporting. He is known and well respected in the documentary community all over the world and has – together with Diana el Jeiroudi – been awarded for his work to create awareness for the importance of the documentary film in his country and the Middle East region.

I am sure that friends and film people all over will shout to the Assad-regime: Free Orwa Nyrabia!