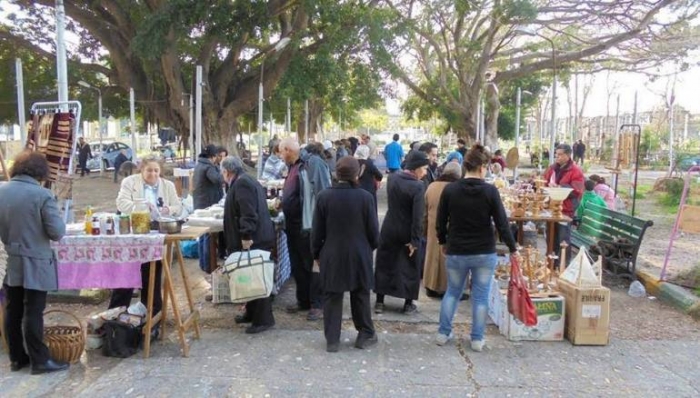 Authorities in Lattakia have launched a campaign which they claim is aimed at cleaning the city of all unlicensed street stalls, but locals say the move only targets poorer vendors while leaving stalls run by regime loyalists untouched.

Dozens of stalls were destroyed in the Btarneh garden, where vegetables, fruits, toys and other products were stepped on and smashed by the municipality members and loyalist shabeeha militiamen.

« Shabeeha members began sarcastically calling out the names of vegetables or fruits that they stepped on and smashed along with other municipality members, » said Mohamed al-Sahili, correspondent of the opposition Lattakia News Network.

Sahili mentioned that sellers and stall owners had begged the police and municipality members to give them time to evacuate the garden, but said even the police beat a young man for trying to run away with his stall and products.

Abu Khalid, 60, whose stall was also destroyed, said: “How will I be able to fund the treatment for my ill wife, who will provide food for my grandchildren? I don’t have money to afford a new stall, no one but God knows what will happen to us. »

“Why [are] the poor are not allowed to work, while you leave your men and [those] who support you to work and sell whatever they like,” Abu Khalid asked of the authorities.

Omar, who owns a vegetable stall in Sheikh Dhaher square, confirmed that shabeeha members sell smuggled products at their stalls like cigarettes and alcohol, as well as drugs, weapons and pornography.

According to Omar, the municipality’s campaign only targeted venders in poor neighborhoods like Skantori, Ramel Janobi, Slaibah. Police arrested dozens of hawkers and vendors who tried to prevent authorities from removing or destroying their stalls.