Well-known activists, scholars and writers are speaking out against providing a forum for Mother Superior Agnès Mariam de la Croix, a Catholic nun in Syria. Among Syrians participating in the struggle against the dictatorship of Bashar al-Assad, Mother Agnés is bitterly criticized as an apologist for the regime, going so far as to claim the horrendous gassing of mainly women and children in Ghouta last August was a fraud.

Mother Agnés is currently on a speaking tour in Britain, though the Stop the War Coalition announced she was withdrawing from her invitation to speak at a conference they have organized for November 30. She will come to the U.S. to speak in the following weeks–activists in solidarity with the Syrian revolution against the regime are planning for protests. 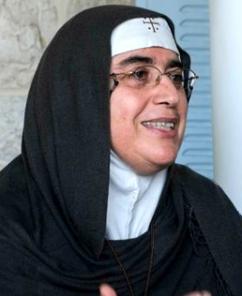 Responding to a firestorm of protest, Jones and Scahill vowed to boycott the event if the Syrian-based nun spoke alongside them. Eventually she decided to « withdraw » from the conference, and StWC issued a statement without explanation. Nor did it divulge why anyone would object to a Syrian cleric’s participation in an ostensibly pro-peace event.

Here are some reasons why we consider Mother Agnès-Mariam’s inclusion in an antiwar event to be a « red line » for opponents of conflict. Despite contrary claims, she is a partisan to–rather than a neutral observer of–the war in Syria.

Mother Agnès claimed that the Syrian opposition faked films of Bashar al-Assad’s August 21, 2013, sarin gas attack on Ghouta in the suburbs of Damascus. In her 50-page dossier on the horrible events of that fateful morning, she wrote that the dead, gassed children documented in those videos « seem mostly sleeping » and « under anaesthesia. »

According to Father Paolo Dall’Oglio, a Jesuit priest exiled by the Assad regime for speaking out against its suppression of peaceful protests and currently a prisoner of al-Qaeda’s Syrian affiliate, ISIS, Mother Agnes « has been consistent in assuming and spreading the lies of the regime, and promoting it through the power of her religious persona. She knows how to cover up the brutality of the regime. »

Moreover, Syrian Christians for Peace have denounced Mother Agnès for claiming there had never been a single peaceful demonstration in Syria. They also accused her of failing to disburse any of the money she raised in the name of their beleaguered community. They have asked « that she be excommunicated and prevented from speaking in the name of the Order of Carmelites. »

Having a massacre denier and apologist for war criminals like Mother Agnès speak alongside respected journalists such as Jeremy Scahill and Owen Jones is not only an insult to them and their principles. It is also, more insidiously, a means of exploiting their credibility and moral authority to bolster hers, both of which are nonexistent. No journalist should be sharing a platform with Agnès when she stands accused of being complicit in the death of French journalist Gilles Jacquier by his widow and a colleague who accompanied him into Homs during the trip arranged by Mother Agnès in January 2012.

Given that her UK speaking tour is still scheduled to last from the November 21-30, we feel compelled to express our profound and principled objections to those who give a platform to a woman condemned by Syrian pro-peace Christians for greasing the skids of the regime’s war machine.