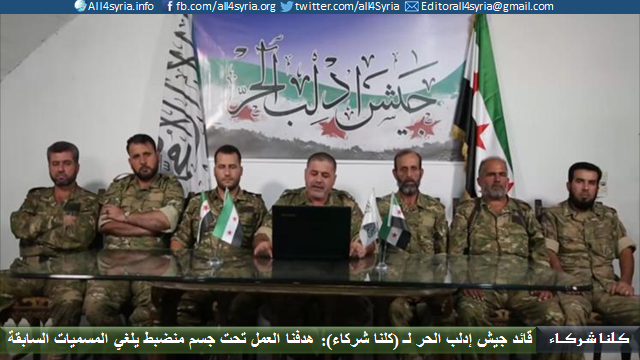 Commander of new group says opposition aims to work within an organized body to become a single, integrated force to defend ideals of the revolution

In a statement, the group said the merger came as a result of the urgent need to unite and work jointly and meet the calls of Syrians to become a single, integrated, organized force in defending the principles of the Syrian revolution and defending civilians.

In comments to All4Syria, the head of the Free Idleb Army, Capt. Hassan Hajj Ali, said: “This step came as a result of the urgent need to unite at this stage of the Syrian revolution as well as in response to the calls of honorable Syrians inside and outside the country. The aim of this unification is to move ahead in achieving the aims of the Syrian revolution, protect civilians, and form an organized body which cancels out the previous titles.”

Ahmed al-Hamoud, from the Northern Division, said: “This unification is a major effort and the work of years of armed struggle against the regime. The merger is a solid point for the future and it was the demand of all civilians, without whom we would never have been.”

The spokesman for the Northern Division’s media center said: “Unity is strength, and strength is victory. This process is only the beginning, in expectation of groups that could join us. With the decision we took, our clear and explicit aim is to liberate the country from the criminal regime and satisfy the demands of our proud people in the area.”

Capt. Rashid al-Hourani, the military head of the Tahrir al-Watan movement said: “This merger is the key to victory and all groups operating in Syria should comply with the desire of the people who went out and faced dictatorship. All fighters should comply with this desire to bring victory to the steadfast, free people of Syria.”

Colonel Bashar Saad Eddin, the previous military head of the military council in Homs, said: “I congratulate our people in Idleb on this unification, and offer thanks and respect to all those who contributed to it. It is a symbol of dignity and handwork. We ask God to continue this for the good of our country.”

Because the group’s statement was based on the will of civilians, residents expressed their relief and joy at this new group, showing this through social networks. This news left a positive impact with them, and they expressed their great joy, and said that the formation of the Free Idleb Army was a powerful message to the tyrant regime and its agents.

Just hours after rebels announced the formation of the army, it was mourning 22 fighters in its ranks in the Hama countryside, after a seismic bomb struck its base near Taybat al-Imam. All of the victims were from the town of Kafranbel, dying in the cave where they had taken shelter.