Robots to the Rescue – by John Beck

Ahmad Heidar, a former teacher, is using his expertise in electronics to design a machine that can rescue wounded Syrians from live fire

“The authorities think we’re building a machine for making chocolates,” Ahmad Heidar says with a laugh.

We had just arrived at a nondescript building in a Turkish town along the Syrian border. Inside, a pair of large mechanical arms rested on the concrete floor. These machines, however, have nothing to do with confectionary. In fact, they’re part of a robot that Heidar hopes will rescue sniper victims in the Syrian civil war. 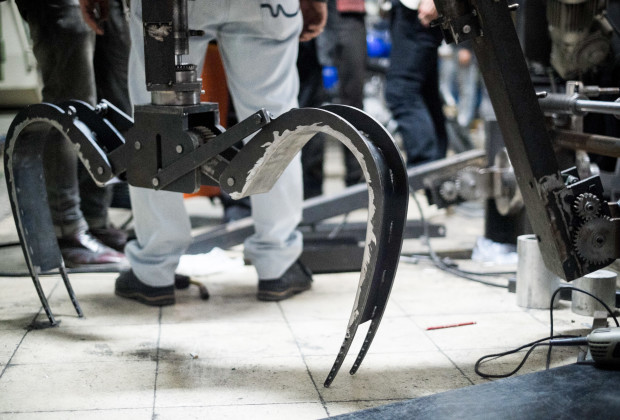 The arms of the robot, Tena (Vocativ/Leyland Cecco)

Just a few miles away, that conflict continues to rage. Snipers loyal to Syrian President Bashar al-Assad often deliberately shoot to injure, rather than kill, their targets, Heidar says. The motive isn’t simple sadism (though that happens, too); it’s human bait. The tactic is cruel but effective: Shoot one person, wait for his friends to come to the rescue, then kill the whole group.

During the early days of the uprising, Heidar watched this scenario play out in his hometown of Aleppo. Many fighters and civilians died trying to use ropes, poles and a variety of makeshift tools to save their injured countrymen. 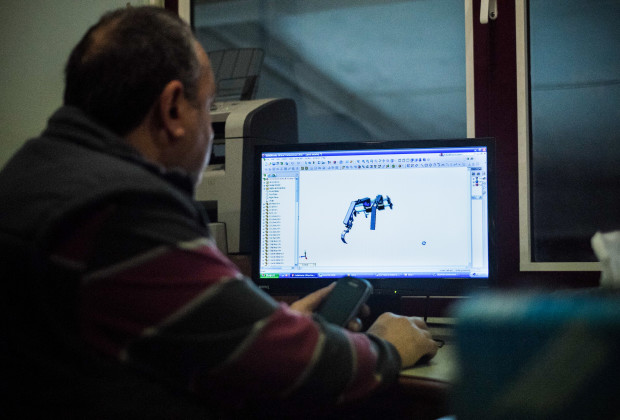 Shocked at the cruelty of the regime, Heidar, a former teacher, decided roughly a year and a half ago to use his expertise in electronics and computer programming to design a way to safely rescue people from snipers. Working with a childhood friend who asked to be known only as Belal, he thought up a solution: a remote-controlled robot. Heidar named the robot Tena, after a Finnish woman he once sat next to on a plane and “fell in love with for an hour,” he says. 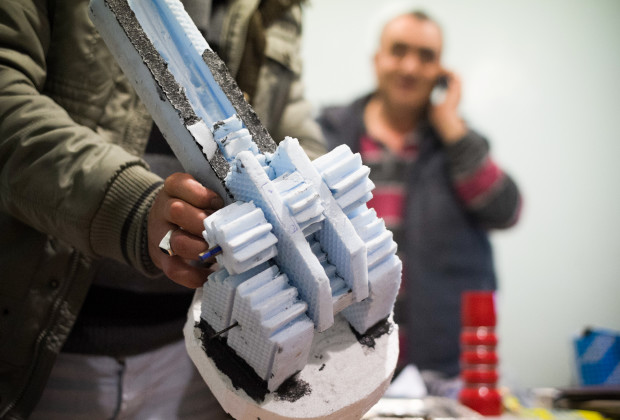 The robot, which isn’t finished yet, will be made from a heavily modified bulldozer and will likely run on diesel fuel. It will feature a tank tread and the mechanical limbs I saw at Heidar’s workshop, a two-story building owned by a Turkish supporter. The arms will be positioned so the robot can pick up a victim, place him on a stretcher inside the machine, then carry him to safety. Meanwhile, Tena’s controls will allow her to be operated from roughly a mile and a half away. 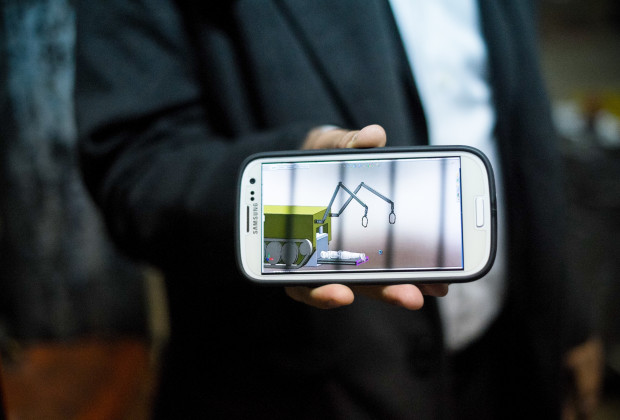 A rendering of the finished robot (Vocativ/Leyland Cecco)

Also included: A speaker to give victims instructions—and play reggae. The thought of a two-armed rescue robot rolling through war-ravaged Syria and pumping Jamaican dance music may seem crazy. But the tunes have a purpose: to relax the wounded and make sure that snipers can’t hear conversation between Tena’s operators and the people they’re trying to save.

Though the robot isn’t finished yet, its inventors have come a long way in a short amount of time. For over a year now, Heidar has been shacked up in a modest hotel in Kilis. He fled there in September 2012 after the fighting in Aleppo intensified. His new home is small, but he lives in far better conditions than many other Syrian refugees. And he hasn’t lost his sense of humor. “Assad isn’t that bad,” he jokes. “It was always one of my dreams to live in a hotel.”

Not long after he arrived in Turkey, Heidar, along with Belal, set up a website to crowdfund the robot’s development. Unfortunately, it has generated very little income, so much of the budget has come from Heidar’s own savings and those of his French wife, who sold her car to help pay for the project.

Initially, when they were working on Tena’s controls, their funds were so low that they had to work out of the hotel room. It’s not an ideal space for engineering; a neighbor once called the police, alarmed that clouds of smoke were billowing out the window. Heidar managed to convince the officers that he was repairing his phone. 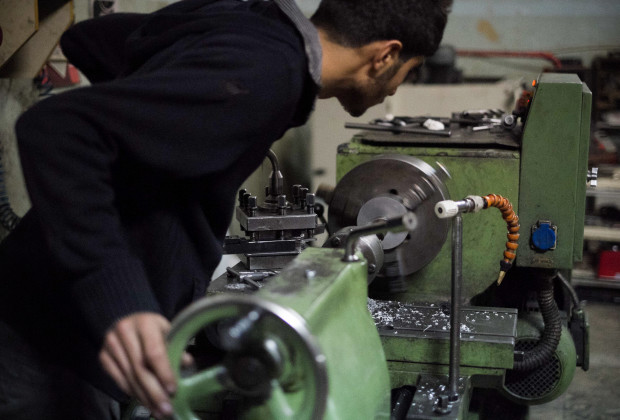 The aim of the Tena project is to safely remove victims of live fire away from snipers in nearby buildings. (Vocativ/Leyland Cecco)

Once they began building the mechanical arms—the most time consuming part of his ambitious plan—they upgraded to the workshop. The limbs are almost finished now, but the duo is running low on funds, and the project will require an extra injection of cash before it can be completed.

The next step in the construction process is attaching Tena’s arms to the bulldozer body. That is, once they can afford it. Heidar says a few Syrian rebel brigades offered to provide him with a chassis, but only on the condition that he also build them weapons, something he has refused to do. In the meantime, Haider and Belal are also working on a metallic alloy armor to protect the robot—and the people whose lives he hopes it will save. “We call it a T-shirt for Tena,” he says. “It has to be strong and light.” 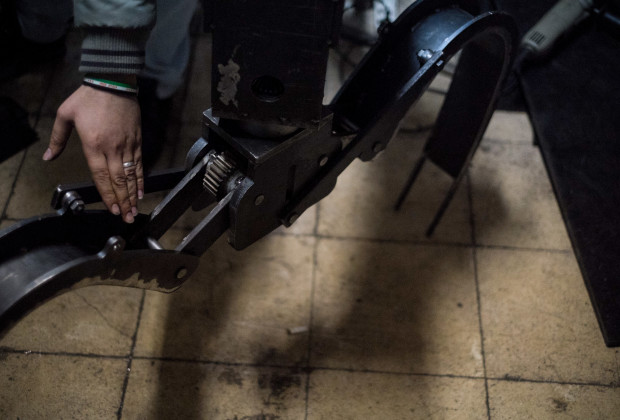 The robot, which isn’t yet finished, will be made from a heavily modified bulldozer. (Vocativ/Leyland Cecco)

The robot is not Heidar’s first endeavor against Assad. Before he left Syria, he was part of a hacking group known as the Pirates of Aleppo, waging electronic war against the regime’s Syrian Electronic Army.

For now, however, Tena is his all-consuming passion, and while he doesn’t expect her to last long on the battlefields of Aleppo, he’s confident that he will accomplish his goal of showing the world that a robot like Tena is possible. “If we save one person,” he says, “then it will all be worth it.”