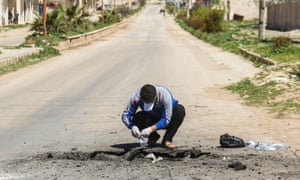 A man collects samples from the site of the attack in Khan Sheikhun. Photograph: Omar Haj Kadour/AFP/Getty Images

The nerve agent sarin was used in an attack in April on the Syrian town of Khan Sheikhun and was likely to have spread from a crater in a road where a projectile had hit, the global chemical weapons watchdog has confirmed.

A report by the Organisation for the Prohibition of Chemical Weapons (OPCW) also found that hexamine – a known component of the Syrian regime’s stockpiles – was contained in samples taken from the scene and from the blood and urine of victims. 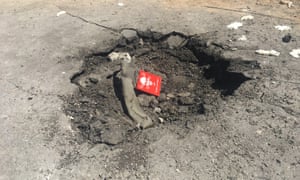 A photograph of the crater in Khan Sheikhun shortly after the 4 April attack. Photograph: Kareem Shaheen for the Guardian

The OPCW said its mandate was solely to determine whether chemical weapons were used in the attack, which killed more than 100 people and left up to 300 others contaminated. A UN investigative taskforce will now attempt to determine who was responsible.

While not attributing blame, the report’s finding that the contamination spread from a hole in the road is significant.

The account matches that of victims and witnesses, who had said the sarin spread from a rocket, or shell, fired from a Syrian jet that had circled above the rebel-held town shortly after 6.30am on 4 April.

Syrian and Russian officials had said the mass exposure was instead caused by an opposition warehouse being hit.

The OPCW report made no mention of such a warehouse, and a Guardian inspection of the area within hours of the attack found only abandoned buildings, none of which had been recently hit.

Russia’s Foreign Ministry has said the OPCW report was “biased” and based on “doubtful evidence”.

But the UK foreign secretary, Boris Johnson, said he had “absolutely no doubt the finger points at the Assad regime. The exact responsibility for dropping the sarin will now go to a joint investigative mechanism to be confirmed,” he said.

“We will drive on with the UK campaign to impose sanctions on those responsible …People who drop chemical weapons on innocent people should be held to account.”

Ahmet Üzümcü, the director general of the OPCW, said the atrocity wholly contradicted the norms enshrined in the chemical weapons convention. “The perpetrators of this horrific attack must be held accountable for their crimes,” Üzümcü said.

Abu Habak, a nurse who treated victims in the immediate aftermath of the attack, said there was no doubt the regime of Bashar al-Assad was responsible for the attack.

“However we do not expect anyone or anybody to care, even after findings of the OPCW, or UN, because no one remembers after time passes,” Habak said. “They make a big deal when it happens, and then they forget.”

The use of sarin has been highly contentious throughout the Syrian war. An attack in the outer Damascus suburbs in August 2013 killed about 1,300 people, drawing international condemnation and the surrender of much of Syria’s sarin stocks under a Russian-brokered, UN-supervised plan.

However, up to five tonnes of sarin is thought to have been hidden from investigators. Small-scale attacks have also been reported in opposition-held areas near the Syrian capital from mid-2012, and in the north of the country since then.

A series of attacks in eastern Hama province in December killed more than 90 people. Photographs from the scene closely resembled images taken from the Damascus and Khan Sheikhun attacks.

Firas al-Jundi, a doctor who treated multiple patients exposed to sarin after the attack said: “We witnessed the attack, we even recovered pieces from the rocket. we saw the soil colour and the colour of the surroundings. Everything was documented and sent to international investigators.

There is no doubt at all that the regime launched the chemical attack on Khan Sheikhun. We call on the international community and the UN to bring to justice the Syrian regime.”