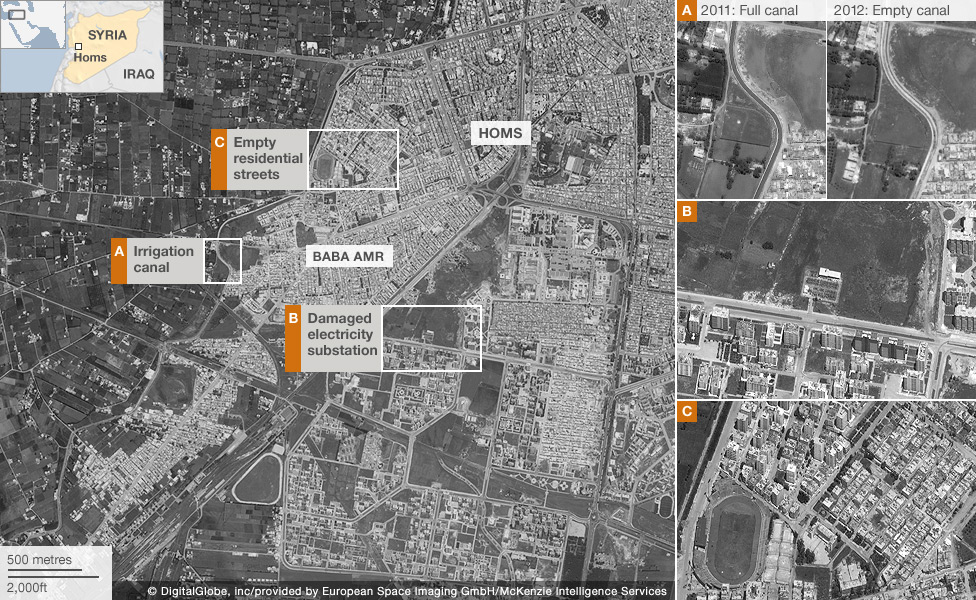 As the conflict in Syria worsens, a growing number of civilians there are being forced to flee their homes to escape the fighting, according to the International Committee of the Red Cross (ICRC).

The Geneva-based organisation said on Friday that those wounded in the fighting between government forces and rebels are finding it hard to reach medical help and even basic food, such as bread, was becoming scarce in affected areas. The ICRC said civil war has erupted in some areas of Syria at times.

These satellite images obtained by the BBC give just a small indication of the level of suffering and displacement experienced by non-combatant Syrians in the city of Homs, caught up in their country’s tragedy.

The main image is a general view from space of the south-west part of Homs, including the shattered district of Baba Amr. The two pictures at location A show clearly what has happened to the area’s water supply.

A photograph taken in May 2011 shows a full irrigation canal flowing through fields, connecting the district to the reservoir sited 12km south-west of Homs. A photograph of exactly the same spot taken a year later, on 15 May 2012, reveals the largely dried-up irrigation canal.

The two contrasting images offer no proof of who is responsible for this situation, which local residents blame on the government and for which the government blames « armed terrorists ».

Temperatures in Syria can exceed 40C (104F) in summer and locals accuse the Syrian army of deliberately shelling and rocketing vulnerable water tanks on rooftops in order to deprive residents of drinking water.

The situation has sometimes been exacerbated by rumours that the remaining water supply has been contaminated, leading to a rush on bottled water. Amateur video footage taken earlier this year and verified as genuine by the BBC shows the damage done by shrapnel to rooftop water tanks. 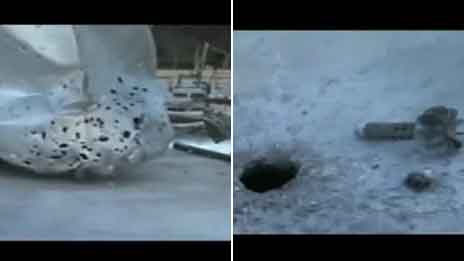 Nedal, an opposition activist from Homs, said: « The shelling has been going on for four months, targeting neighbourhoods opposed to the Assad regime. It has destroyed water, electricity and public transport services in the city. The districts of Al-Qusoor, Baba Amr, Bayada and Asherah have had no water or electricity service for two months now. »

The image at location B on the map shows an electricity grid substation in the south-west of Homs. Nedal, the activist, lists eight districts where he says government forces have deliberately blown up or damaged such substations. But again, the image offers no evidence to support that claim.

The final satellite image, at location C, is a telling one. It was taken in south-west Homs at 10:00 on Tuesday 15 May 2012 on what should normally have been a busy, bustling weekday morning, with Syrians going about their daily business.

Instead, it shows a ghost town. The streets are all but deserted with hardly a car in sight.

« People are still being displaced on a daily basis, » said Hicham Hassan, a spokesman for the ICRC. « We are receiving regular reports from people facing more and more difficulty [accessing] essential medical services and this has increased to medical treatment and to food, including bread. »