Right now I am with dozens of peace activists blockading the main entrance of the Russian embassy in London. I am chained to the gate along with a giant structure that represents the killing in Syria.

I want you to know why we’re doing this. 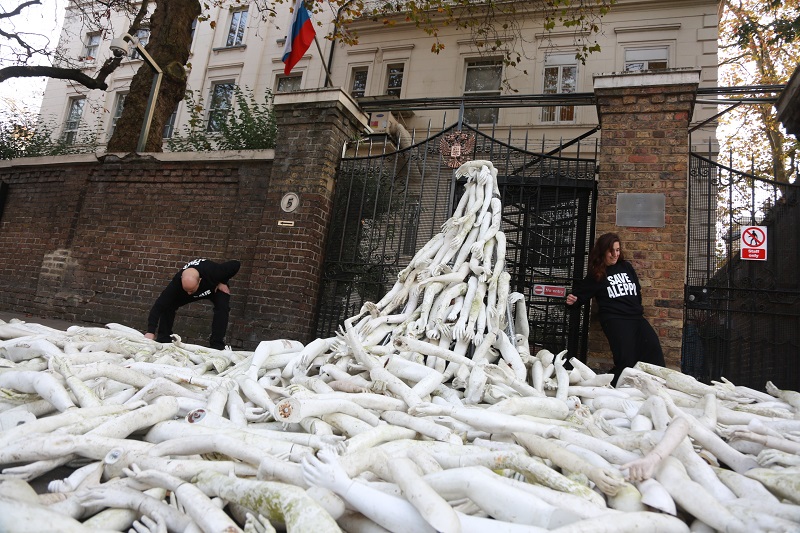 And it’s about to get worse. All signs point to a dramatic escalation of airstrikes by the end of the week as the Russians try to take the entire city. Leaflets have been dropped on residents warning them of ‘annihilation’ and Syrian activists have launched an SOS call to the world to keep all eyes on Aleppo. They are worried that Russia will use the distraction of US elections to flatten the besieged part of the city.

Together we can make sure the Russian government knows that people around the world are watching and demanding they stop the carnage. While we are outside the embassy in London, you can take action now by flooding Russian embassy phone lines with calls from around the world telling them that you oppose the bombing of civilians in Aleppo.

Call the Russian Embassy in your country now and let them know people are watching and demanding the bombs in Aleppo stop for good. Click here for the phone numbers.

The police have turned up and I’m not sure if they are going to cut the locks off and take us in or what will happen next. I’ve never been arrested before, I’ve never been to court and I know that between embassy security and the police that might be about to change.

Everyone has to do what’s in their power to pressure Russia to stop these attacks. The only thing necessary for the triumph of evil is for good people to do nothing. We can’t be those people.

From the Russian embassy with love,

P.S. If you’re interested in planning peaceful protests in solidarity with Syrian civilians please get in touch at info@thesyriacampaign to see if we can support your efforts.