Shamed and Abandoned: The Fate of Syria’s Female Ex-Inmates – by Lizzie Porter 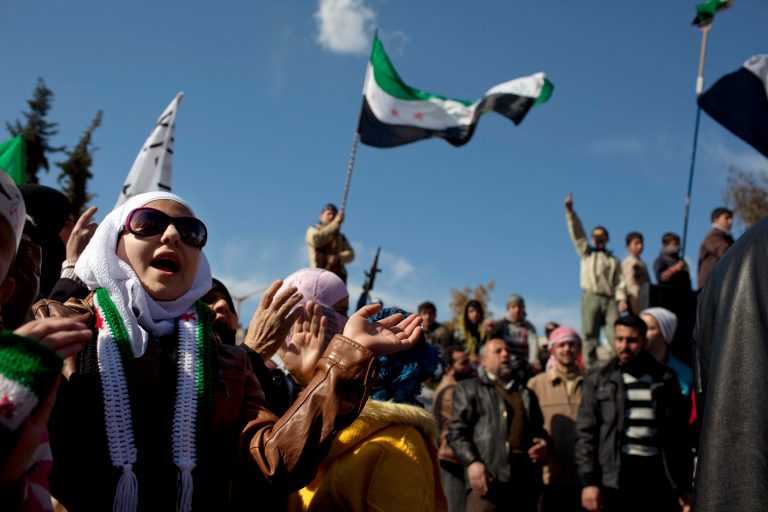 The Syrian regime’s crackdown on dissent has put thousands of women in prison since the start of the uprising in 2011. Many experience abuse while in detention – and find themselves ostracized once they are released. Photo by AP/Rodrigo Abd

Women being held in Syria’s government prisons report psychological abuse, sexual assault and torture. But for many, the emotional and physical suffering they experience after their release is even worse.

When Luna Watfa refused to reveal any information to her interrogators, they took her son, 17, and threatened to torture him. “They put my son’s hands behind his back, his T-shirt over his head and they took him,” she says.

Watfa, now 35, was a law student when the popular uprising broke out in Syria in March 2011. But when she witnessed president Bashar al-Assad’s forces shooting at and beating protesters, she decided to devote herself to documenting what she saw. In January 2014, she was arrested on a Damascus street by a gang of men whom she quickly recognized as government officers. “There were three cars with 12 guards. They came only for me,” she says over Skype from her new home in Koblenz, Germany. The men escorted her to her home, demanded access to her laptop and detained her son, threatening him too. “I tried to say that [they] had no right to take him,” Watfa says. “The officer looked at me and laughed. ‘I am the law, I can do anything I want,’ he replied.”

Mona Mohammed Aboud, 29, was a teacher at the start of the revolution and a vocal opponent of the regime. She has twice been a prisoner of Syria’s intelligence and security services network. During one 63-day period of detention, in 2014, she says she was subjected to torture including electrocution, beating and starvation – and she still suffers physical pain as a consequence.

“There was no such thing as living. Just hell and hunger. The security forces are not trying to kill you; they want to keep you alive – but only just.”

“There was no such thing as living. Just hell and hunger,” she says. “The security forces are not trying to kill you; they want to keep you alive – but only just.”

Watfa and Aboud are among the thousands of women in Syria who have been detained by the regime since the beginning of the uprisings. There are no official figures on how many women have been held in government prisons, or by any other group in the country. But a report released in November by the Syrian Network for Human Rights said that more than 8,400 females, including 300 girls, are currently in government jails. Around 5,000 more are reportedly being held captive by militant groups such as the so-called Islamic State and Jabhat Fatah al-Sham. Many of these women face brutality and sexual violence while in detention. But the struggles they face upon their release – ostracism, shame, broken relationships and health issues – can often be even harder to cope with.

When she was in al-Khatib prison in Damascus, Watfa was once beaten so badly she could not walk for three days. She wasn’t raped, but she and others were the targets of sexual harassment, she says.

“The guard started to put his hand on my breast and opened my shirt. I screamed at him and said I would tell the officer, so he left,” Watfa says. “When I did tell the officer, he did nothing, as usual.” She was later transferred to Adra Central Prison in northeast Damascus, where she stayed until her release in 2015.

Aboud was imprisoned after being tricked into meeting regime security forces who befriended her on Facebook. She, too, was eventually transferred to Adra Central Prison. There, she says, the male guards would approach the prisoners for sex. “The warden would tell the detainee that he could secure her better food and send messages to her family provided that she slept with him,” says Aboud.

But upon their release, both Watfa and Aboud discovered that some things are worse than the grinding horrors of detention.

In part because of the presumption that female prisoners have been raped, many are ostracized by friends and family once they get out. “My family was torn over whether I had been raped or not,” says Aboud. “The first question asked by the lawyer who was assigned to my case when it appeared in front of the anti-terror court was whether or not I had been raped. My answer was a conclusive no,” she says.

Aboud’s parents said they believed her, but limited her movements once she was back home. “Other relatives broke away from me and would not visit us in Damascus for a long period of time afterward,” she says.

Fearing another arrest, she found support from a network of Syrian media activists (that she asks not to be named), who helped her escape across the border to Turkey. She lives there now, in the city of Gaziantep.

Sakher Edris, from the Working Group for Syrian Detainees, says his team often sees female former prisoners suffer social rejection and the breakdown of relationships after they get out. “Many of the detained women are either divorced after their release, married forcibly to a person they do not like or, as a reaction to society, take off their hijab and travel to Europe, staying away from their parents and communities.”

Often unable to discuss the perceived shame of imprisonment with friends or relatives, many female ex-detainees lack access to healthcare and support networks. “You feel that [the regime] did not take anything from you, but they took your soul,” says Watfa. “What hurt me the most was the fact that when I was released and saw my kids again, I did not feel anything. In prison, they [the guards] tortured me – OK – but this was not the worst thing. The worst thing was that they took my feelings.”

For the first three months of her detention, Watfa did not know whether her son had really been arrested, as she had been led to believe. When she finally got the chance to ask her son what had happened to him that day, she says, “He told me that they put him in the bathroom [in our flat]. They said, if you breathe and your mother hears you, we will punish you hard. So keep silent and don’t breathe or move. For one month after, he couldn’t speak about what happened. It was very bad for him.” 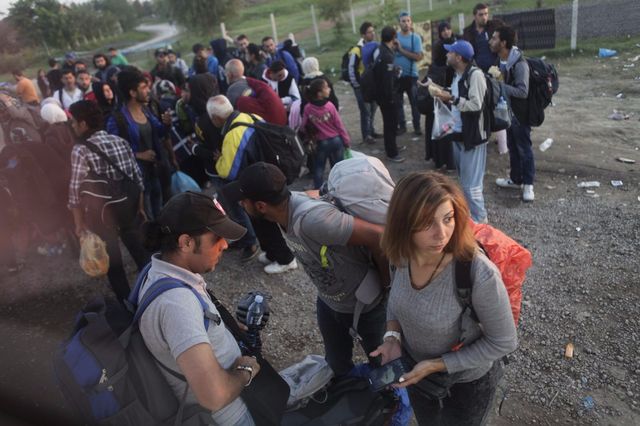 Luna Watfa fled to Germany after her release from prison. Her children were used as a means of psychological torture against her, but they are now reunited in their new home. (Harry Shun)

Civil society groups are helping women ex-prisoners from Syria access psychological help in places such as France, Turkey and Germany. But the need far outweighs the supply, and some experts say the possible consequences for the future of Syrian society are grave. Sema Nassar, author of a report on the subject for the Euro-Mediterranean Human Rights Network, concluded that the detention of women in Syria is contributing to the “disintegration of society” in the country and forced migration. “It contributes to increasing the refugee flows to neighboring countries as well as to Europe, since many women, rejected by their family and community, see themselves forced to leave the country upon their release,” she says in the report.

Among female former detainees there is determination to find a glimmer of light in the dark chapters of their past. Watfa and Aboud are both working to lessen the stigma for women who have been imprisoned, encouraging them to report their experiences. “For me, still the greatest aim – greater and more important than fear – is not betraying my friends in Adra prison,” says Aboud.

In November, Watfa received the news that her children would be allowed to join her in Germany, under family reunification laws. “They are here,” she says in a recent WhatsApp message. “Everything is great. I can rest much better now.”