Four days after Spain’s national court became the first foreign court to admit a criminal case against Syrian officials, a public prosecutor has filed an appeal to reverse the decision and halt the investigation into alleged crimes of state terrorism.

A Spanish public prosecutor has appealed a judge’s decision to admit a criminal case against nine officials from Bashar al-Assad’s government accused of state terrorism and allow an investigation into the matter, Syria Deeply has learned.

In a potentially explosive ruling on Monday, the Spanish National Court became the first foreign court to admit a criminal case against the Syrian government and open such an investigation into whether state terrorism was committed.

However, the prosecutor, Teresa Sandoval, has appealed the judge’s decision to accept the case and is seeking to have it overturned by a higher court. The prosecution had five days to appeal judge Eloy Velasco’s decision and submitted it to the National Court’s Criminal Division on Thursday.

In a phone interview with Syria Deeply, Sandoval said the prosecution appealed on the grounds that Spanish courts do not have the “competence” to hear the case because no Spaniards are among the victims.

The two international lawyers spearheading the case, Almudena Bernabeu and Maite Parejo, had argued for universal jurisdiction – the principle that allows any national court to prosecute crimes against international law regardless of where they were committed – to bring the case accusing Syrian officials of allegedly playing a role in the detainment, disappearance and death of Syrian national Abdulmuemen Alhaj Hamdo.

Though Spanish law states that Spain can only claim criminal jurisdiction over crimes committed against victims with Spanish nationality and residency, the lawyers argued that the plaintiff, Hamdo’s sister, Spanish national Amal Hag Hamdo Anfalis, should be considered an indirect victim of the alleged crime.

Details of the appeal are not publicly available, however Sandoval said they were essentially “the same” arguments included in her recommendation to dismiss the case that she submitted to judge Velasco on February 15. In the report she argued that “the concept of the victim must be interpreted as the passive subject of the crime,” she told Spanish newspaper El Mundo, adding that “the wider concept of the affected and/or indirect victim applies exclusively in cases of indemnization or damage reparations.”

Despite Sandoval’s original recommendation, Velasco opened the investigation, arguing that indirect victims are considered as victims under the Spanish Statute of Victims. In his court order, he also cites the European Parliament and Council’s directive on the basic rights of victims, and a U.N. resolution on “the right of victims of manifest violations of the international norms on human rights and on grave violations of the international humanitarian right to appeal and obtain reparations,” which specifically states that the immediate family members will also be considered victims.

“It’s a pity that the Spanish public prosecution is insisting on the archaic stance that the victim is only the passive subject of the crime,” Almudena Bernabeu, the lawyer spearheading the case, told Syria Deeply.

Spain has a history of using the laws of universal jurisdiction in its courts to open cases against alleged human rights abusers in other countries. Most notably, judge Baltasar Garzón was able to issue an international warrant for the arrest of Chilean dictator Augusto Pinochet in 1998 – a big victory for international justice.

But as the universal jurisdiction cases grew bolder and went after powerful countries – and especially after a case opened in 2006 accusing Chinese officials of genocide in Tibet, and another opened in 2008 involving Israel’s attacks on Palestine – “the political and economic pressure on the Spanish government was hard. In other European countries, the same, more or less, has happened: After having proceedings against powerful countries, they had to reform their law,” Maite Parejo, another lawyer leading the case, told Syria Deeply in an earlier interview.

The Spanish government passed laws restricting universal jurisdiction in 2009 and 2014, requiring that the victims be Spanish nationals, effectively forcing such politically contentious cases to be shelved. “This is an archaism that not only shames Spain internationally but also puts in serious danger the Statute of Victims of Terrorism and its achievements,” Bernabeu said, stressing the importance of this case for international justice.

Other cases involving Syria have been brought to European courts under the principle of universal jurisdiction, but this is the first naming high-level officials in Assad’s regime and directly linking them to alleged crimes. The defendants include Syrian vice president and former foreign minister Farouk al-Sharaa, the head of Syria’s National Security Bureau, Ali Mamlouk, and the head of Syria’s air force intelligence, Gen. Jamil Hassan.

In February 2013, Hamdo was detained somewhere between his hometown of Mashta al-Helou in Latakia and Homs city, a route he regularly took from his job as a delivery van driver. His family was unable to find out his whereabouts or fate for the next two years, until mid 2015 when Hamdo’s son identified his father’s body in a photo from the Caesar File, a collection of more than 50,000 photographs that document the deaths of over 6,000 people in government-run detention facilities, smuggled out of Syria by a defected Syrian forensic officer code-named Caesar in 2013.

From Caesar’s photo, the family was able to deduce that Hamdo was tortured and executed in Branch 248, a government-run detention center in Damascus.

Anfalis, the victim’s sister, and Caesar will testify on April 10, and the investigation into the alleged acts of state terrorism – which judge Velasco said should include evidence provided by France and Portugal – will continue despite the appeal, Parejo said.

Bernabeu told Syria Deeply that she is optimistic that the new judge will rule in favor of their argument. 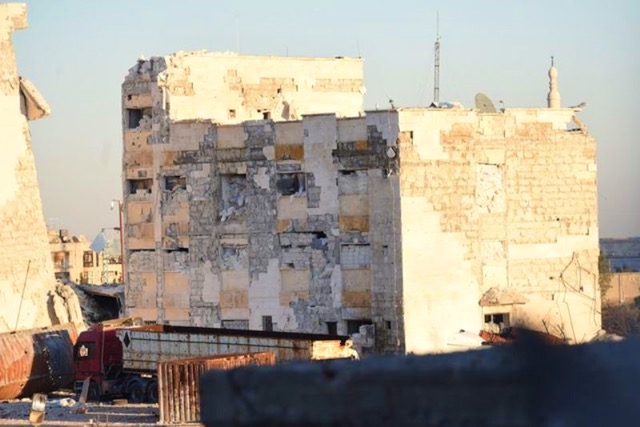 ALEPPO, SYRIA – MARCH 6: The building, which is alleged to be torture center of the regime, is seen after Damascus Front forces captured two buildings in Damascus, Syria on March 6, 2015.Salih Mahmud Leyla / Anadolu Agency