Starvation sieges through the eyes of Syrian artists

A million civilians are living in besieged areas in Syria without any access to food or medication. To stave off starvation, these civilians are often forced to eat tree leaves, insects and cats. Hundreds have starved to death. Meanwhile, tonnes of the world’s aid remains undelivered. These people are needlessly dying because UN aid trucks and planes are being denied access to besieged areas by the Assad regime. Access that has been granted repeatedly by the UN Security Council.

Despite the international community’s inaction, brave Syrians are forging strong social bonds with their neighbors in order to survive as a tight-knit community. People are coming up with innovative ways to farm, generate electricity and survive in dire circumstances. When a family is in need, neighbors immediately rally to get help. A mother looking for milk for her malnourished infant can go door to door in the middle of the night with the certitude that a kind neighbor will extend a helping hand. Hunger hasn’t dampened Syrians’ spirit of resistance either. Activists continue to document the daily shelling and human rights violations. Syrians have refused to bow under pressure because they haven’t lost sight of their original cry for freedom.

“The UN is happy with Bashar Al-Assad in one way or another. As a civilian on the ground I haven’t seen anything from them. Prolonged the conflict, gave Assad all the time he needed to destroy the country, and now the country is destroyed.” 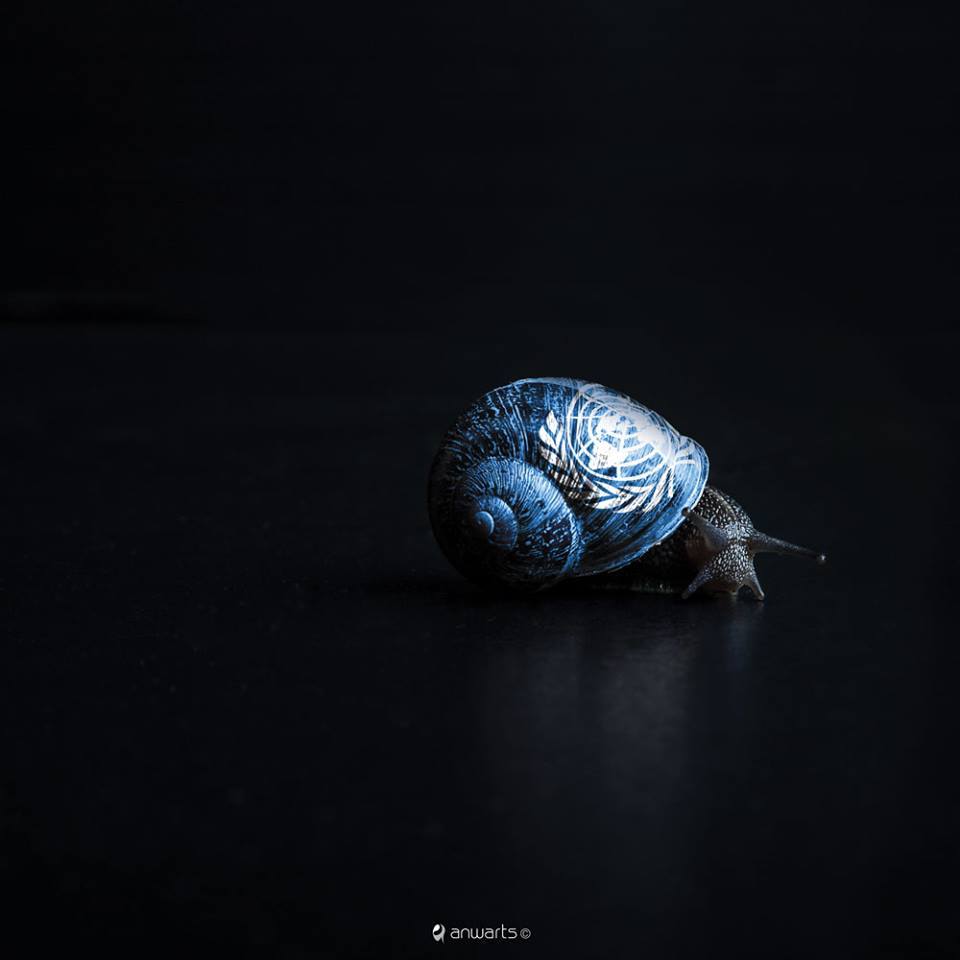 “The regime just threatened the town of Moadamiyeh by saying we should kneel or face death by starvation and annihilation. Is this the political solution that they want? Do they want us slaves to their desires? This will not happen and we remain trapped.” 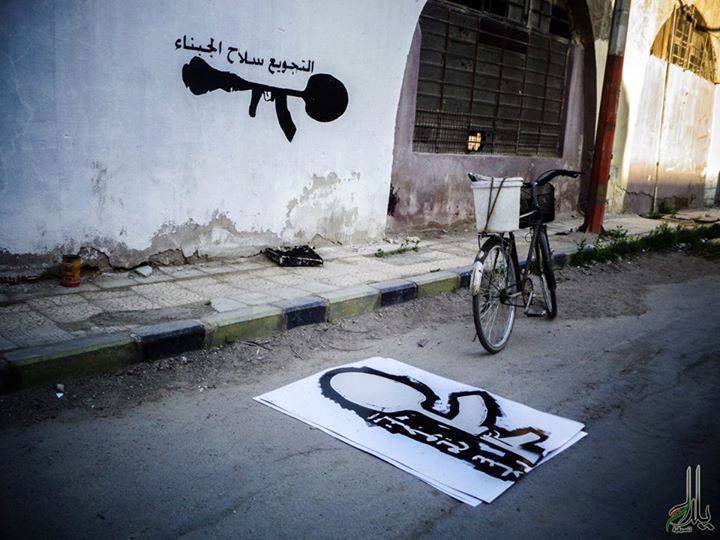 Starvation is the weapon of cowards by Anis Mansour

“If the UN has the whole world and it can’t get in a loaf of bread to the children, what is this UN? You’re telling me they won’t get in because regime says they can’t?”

A resident in Ghouta. 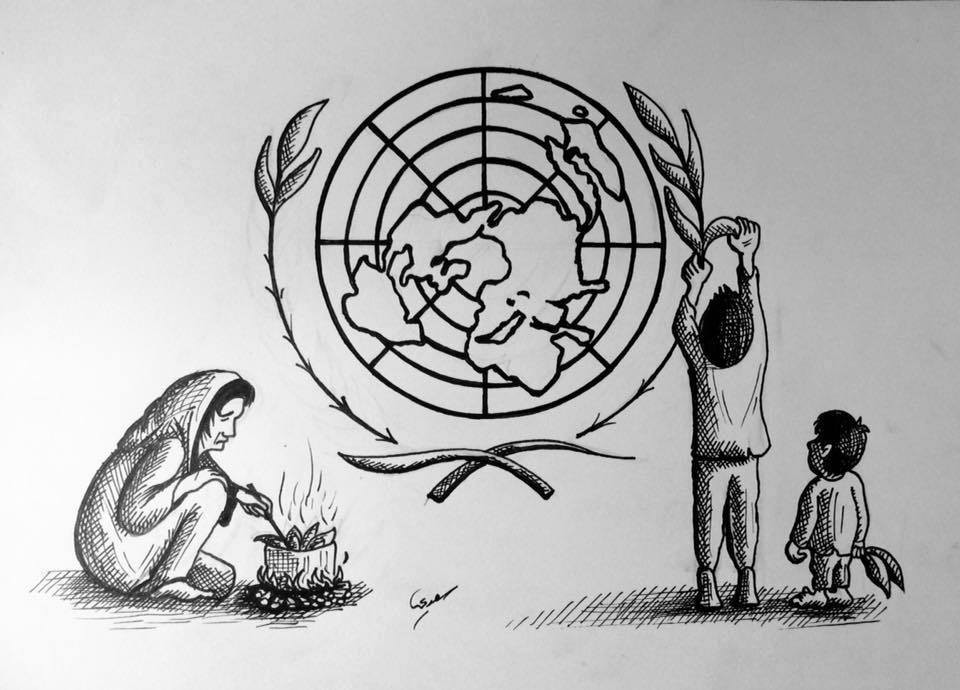 No Title by Hussam Alsaadi

“When you besiege a community you transform their whole raison d’etre from a civil struggle for their rights to a struggle for survival on a day-to-day basis. This is the point of the siege, to neutralise the power of the people.” 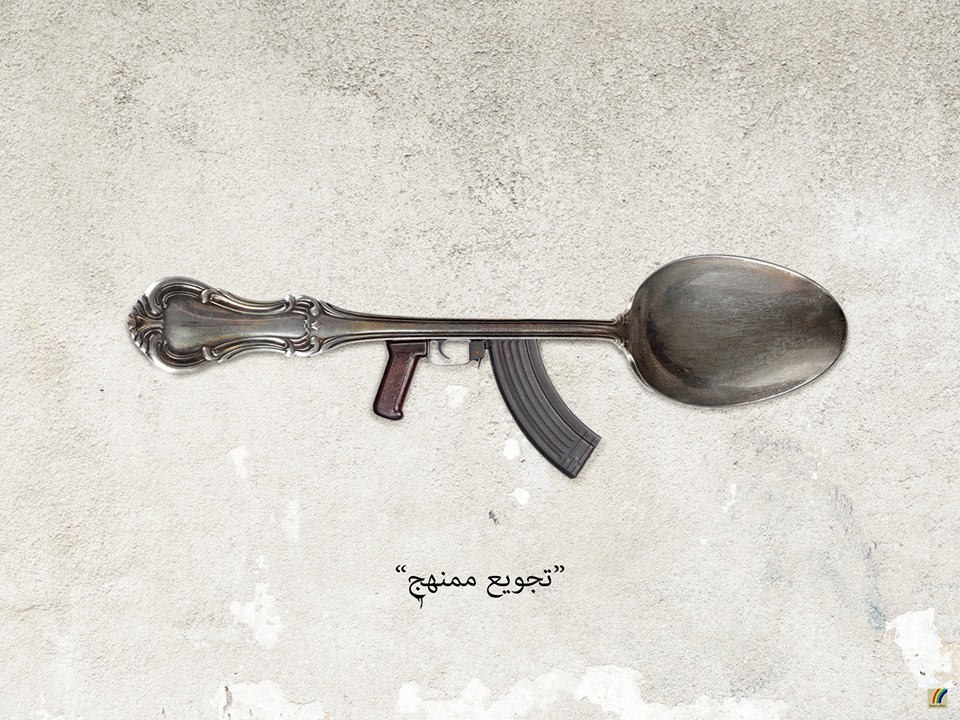 “We can’t take it anymore. Why is there no help for us? We have mothers, sisters, brothers. We are human just like you.” 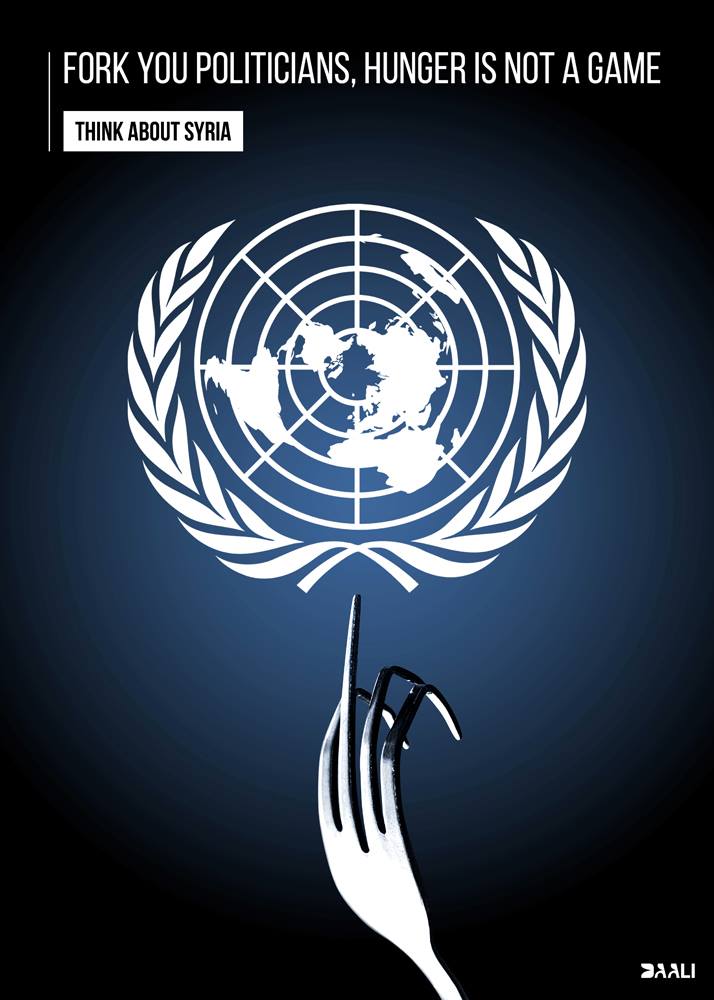 Hunger is not a game by Daali

“The UN has Syria among its permanent members. We are a card these nations use as leverage, but if they wanted to break the siege then they are more than capable. But it’s not time yet in their calculations.” 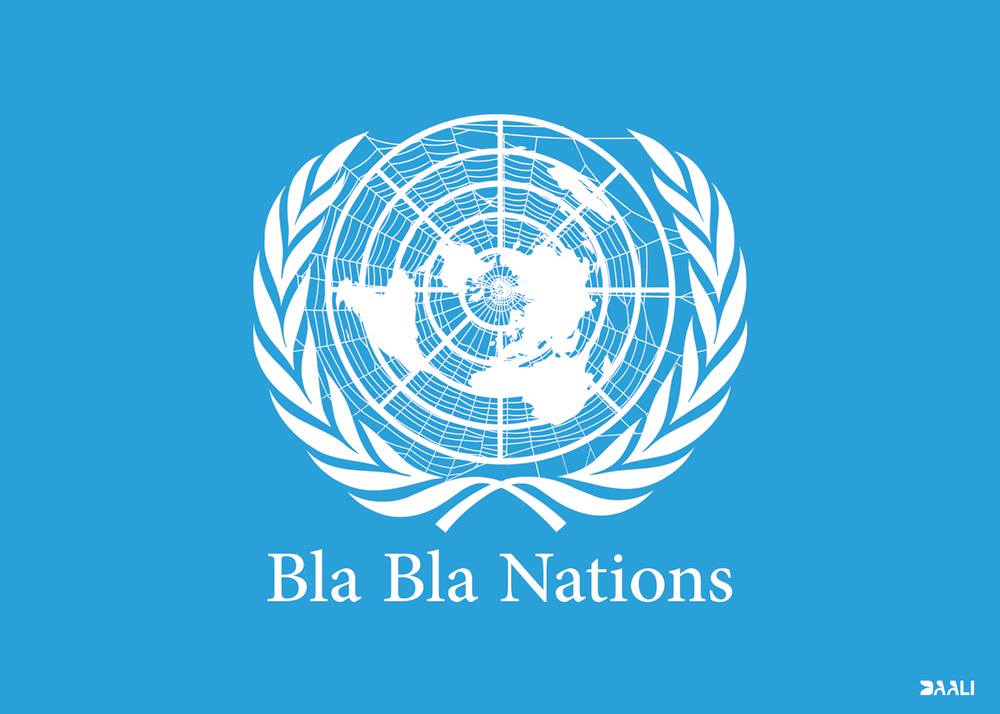 “It’s more important to focus on kids in the siege. Because all adults were partly responsible for the state we’re in but kids did not choose this or the revolution. They are the biggest losers in all these battles. There are child soldiers, there’s widespread child labor, and families are marrying off their girls really young. Those are all realities caused by the siege itself. Because there’s no food or steady salaries, the child has to work and people take advantage of this.” 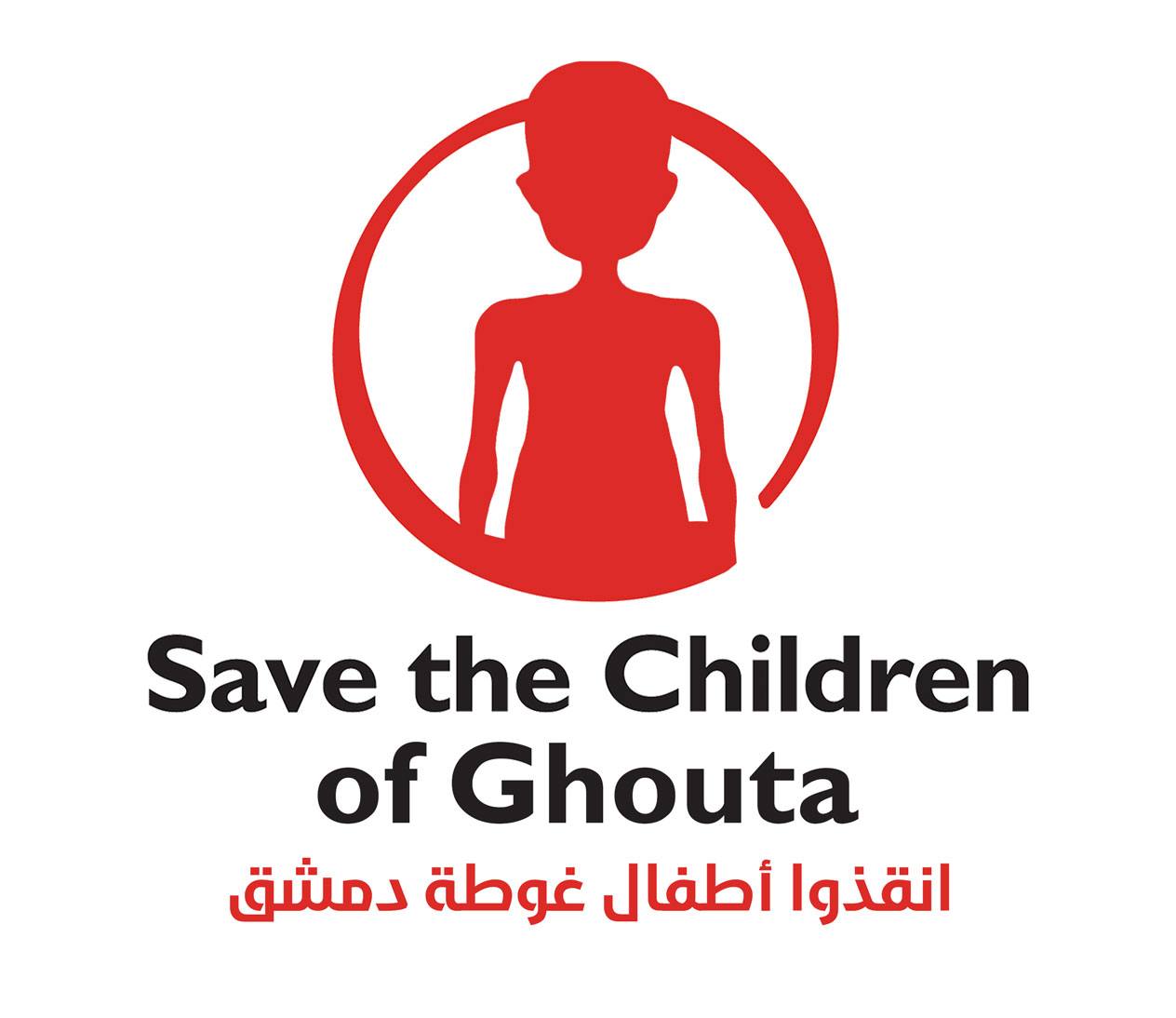 Save the Children of Ghouta by Moustafa Jacoub

“I saw a grown man cry like a baby because he was not able to feed his children. My heart was bleeding. An elderly woman was getting serum and the nurse told her calm down and God willing aid will come, she grabbed her hand and kissed her and begged her for any food scraps.” 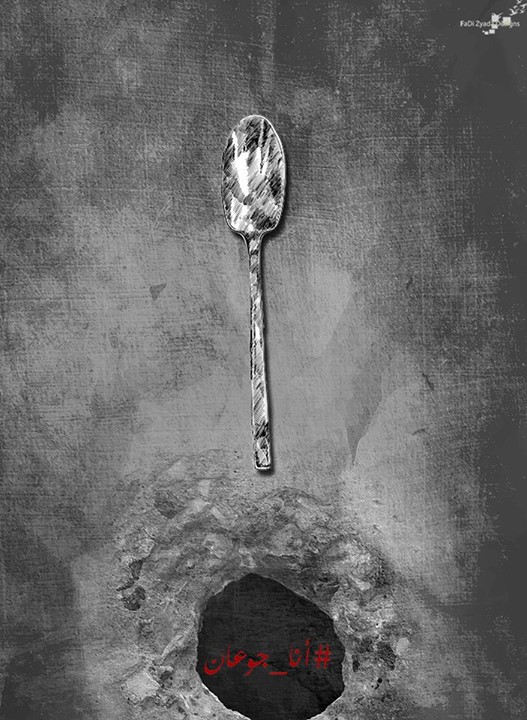 I Am Hungry by Fadi Zyada

“Once, a man I know fed cat meat to his kids without telling his wife because she would have objected. They all got food poisoning. He took me aside after his kids got poisoned and admitted he fed them cat meat. We had to pump their stomachs.”

-A doctor from Madaya 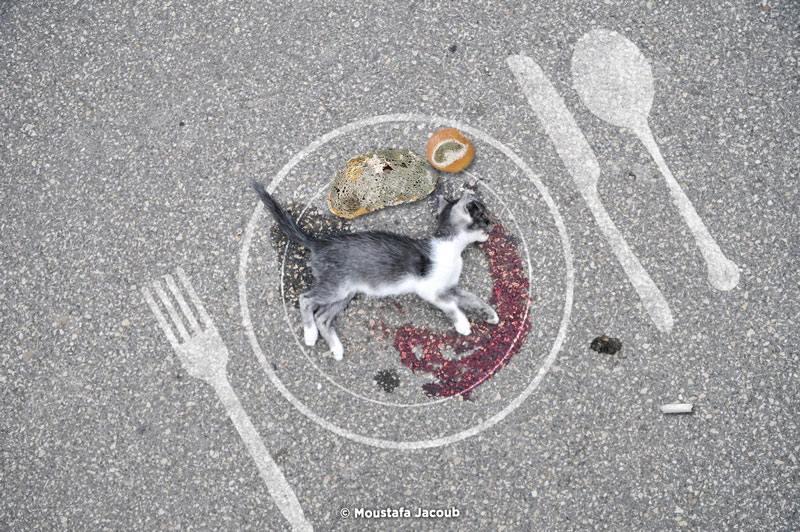 “The day before yesterday a man named Sleiman Fares went crazy and became hysterical from hunger then died. We wash the dead before burying them. I washed his emaciated body myself and buried him. Imagine seeing a skeleton with just skin on him. No fat whatsoever. He died of starvation.” 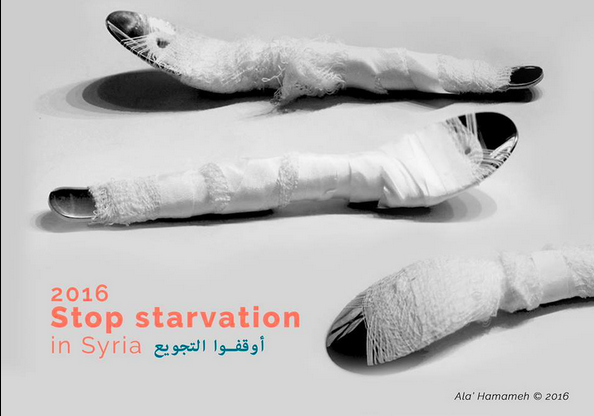