Syria: a scathingly beautiful photograph of the edge of starvation – By Jonathan Jones

Artfulness only adds to this picture’s stark reality. Here is a sinister new chapter in the war between Assad and his people 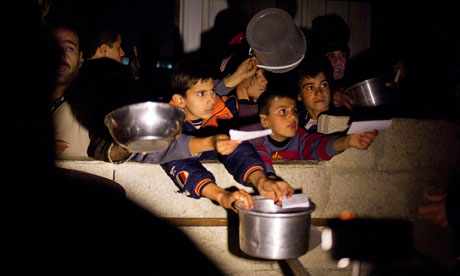 This eloquent picture tells of the terrifying hunger crisis now unfolding in war-battered Syria. The children’s faces as they reach out their empty pots for food distributed by a Turkish NGO at a camp for internal refugees near the north Syrian city of Azaz are beams of pain and desperation that cut through the fog of news to tell the direct human truth: Syrians are on the edge of starving.

The picture is scathingly beautiful. Does the light that gives these desperate faces such a ruddy glow come from a fire, or truck headlights, or was it provided by the photographer? The way the mysterious illumination picks out frightened eyes and pleading expressions from surrounding darkness is positively painterly. It is like a candlelit scene by Joseph Wright of Derby or Georges de la Tour. The way the children reach out their arms and wave their shiny pots has the dramatic gestural power of Caravaggio’s paintings.

But this artfulness only adds to the picture’s stark reality. Here is a photograph whose aesthetic authority deepens its shocking news. This brutally poignant picture documents a rapidly unfolding and sinister new chapter in the war between Bashar al-Assad and his own people. On Tuesday, the UN announced that more than half a million Syrian refugees are officially registered – but the UN seems to be behind the curve on accurate figures. Meanwhile western aid is simply invisible in Syria.

Millions across Syria have been plunged into severe hunger, not accidentally but deliberately as Assad targets bakeries. Bread is an essential part of most Syrians’ diet. Meanwhile, beyond the UN facts and figures, a whole country is in ragged motion, as shelling destroys homes and forces people into the roughest of temporary accommodation. Jobs vanish, prices soar, and mass starvation looms.

Somehow the horrors of Syria have numbed international concern. It has become a story too dire and disturbing for anyone to squeeze into the kind of strident, simple, ideological perspective that seems necessary to get demonstrators on the streets or letters from the great and the good in the papers. It has been relegated to a wretched background hum in the daily news. But this picture deserves to be looked at with fresh eyes, shocked eyes.

Here are the betrayed, bereft and bewildered victims of a war that is now entering its cruellest phase yet. Look into their eyes. Can we really stand by and let Syria starve as well as bleed?