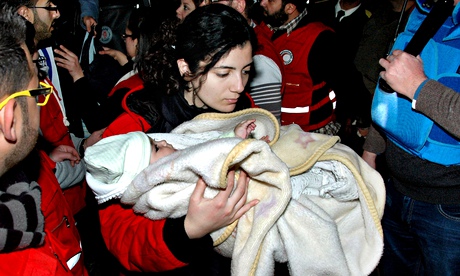 A Syrian Red Crescent worker carries a baby on to a bus – one of some 1,100 civilians to have made it out of the Old City so far during the ceasefire. Photo: AP

Humanitarian agencies are standing by to resume their desperate scramble to evacuate hundreds of civilians – including terrified and malnourished children, the elderly, the sick and the injured – from the besieged Old City of Homs after the emergency operation was suspended Tuesday over « logistical difficulties ».

The United Nations has appealed to the warring factions in Syria‘s civil war to further extend their « humanitarian pause », which began last Friday and was set to end on Wednesday, until all those who want to leave have been evacuated.

Red Crescent head of operations Khaled Erksoussi said his teams were waiting for the conclusion of a daily meeting between the United Nations and Homs’s governor, Talal Barazi.

In chaotic scenes earlier this week, convoys of flagged UN vehicles were seen driving at high speed to the Old City’s main checkpoint to load up with civilians desperate to leave conditions of extreme privation after 18 months of siege.

Unverified video posted on the internet showed women, laden with heavy suitcases and backpacks, clutching at the hands of children as they ran towards the vehicles.

In a setback to humanitarian efforts, Russia on Wednesday rejected the wording of a draft UN resolution calling for greater access to Syria for aid purposes, saying it was aimed at creating grounds for military intervention. The RIA news agency quoted deputy foreign minister Gennady Gatilov as saying Russia would veto the document in its current form. « It is unacceptable to us in the form in which it is now being prepared, and we, of course, will not let it through. »

On Monday the Russian foreign minister, Sergei Lavrov, had dismissed the draft resolution as one-sided and « detached from reality », according to the Interfax news agency.

More than 1,100 of the estimated 2,500 civilians trapped in Homs left by the end of Monday, according to the UN. « It’s an extremely dangerous operation, » said Jens Laerke, spokesman for the UN Office for the Co-Ordination of Humanitarian Affairs (OCHA) in Geneva. « But this is what the ordinary people of Homs have been living with every single day for the past one and a half years. »

UN and Syrian Red Crescent vehicles had come under gun and mortar fire at the weekend, he said, declining to speculate on the origin of the attack. Eleven civilians had been killed inside the Old City over the weekend despite the ceasefire, he added.

The Old City and other opposition-held areas of Homs have been under siege for about 18 months, facing daily bombardment and rapidly dwindling supplies of food, drinking water and medicine. The city was the birthplace of the uprising against President Bashar al-Assad almost three years ago.

The terms of the « humanitarian pause » initially said no males between the ages of 15 and 55 would be allowed to leave the Old City. The stipulation was later relaxed, although more than 300 youths and men were detained for screening to ensure that there were no fighters among them.

The governor of Homs, Talal Barazi, said he expected 80% of men to be released after the « regularisation » process. However, the fate of those not released was unclear, and the UN said it was « deeply concerned ».

« It is essential that they do not come to any harm, » said Rupert Colville, spokesman for the UN high commissioner for human rights. « We will continue to press for their proper treatment according to the international humanitarian and human rights law. »

Last month, evidence smuggled out of Syria pointed to the systematic killing of around 11,000 detainees in the custody of regime security forces between March 2001 and last August.

Some 500 children, most of them under the age of 15, and about 20 pregnant women were among those evacuated from the Old City since Friday. Geoffrey Ijumba, of the UN’s children’s agency Unicef, who is based in Homs, said: « They look sad and weak, dehydrated, emaciated – anything but healthy.

« The children are not in a good psychological condition; they are very scared and are clinging to their parents. »

None of the children inside the Old City had attended school for the past 18 months, he added. « Most of them have been stuck at home, listening to shelling. Even after they come out, you can see the fear in their eyes when they hear the sound of guns. They are terrified. They have witnessed deeply traumatic events. »

Evacuees were visibly malnourished, according to humanitarian workers. « There is very little food available in the Old City, » said Laerke. There were small quantities of flour and bulgar, but most of it was infested with insects. « They are eating it anyway. »

Matthew Hollingworth, Syria director for the UN’s World Food Programme, told the BBC that the « levels of destitution inside the Old City are like nothing I’ve ever seen before. People are living in tunnels underground, moving between shells of buildings to find roots to eat – there has been little food for many, many months now. »

Evacuees given packs of food rations were tearing them open to eat on the spot, according to the UN. Children were undergoing nutritional assessment and, if required, being put on a therapeutical feeding programme.

The corpse of a man who it was claimed had died of malnutrition wasshown on a YouTube video being loaded into a UN vehicle. The sick and injured were given immediate medical attention at a mobile clinic on evacuation, and hundreds of children were being vaccinated against polio, rubella and tuberculosis.

Residents of the Old City have been forced to rely on a single field hospital since the siege began. « For many months it has been without adequate medicine or equipment. It’s a place for people to die rather than live, » said Laerke.

The World Health Organisation sent medical supplies into the Old City at the weekend, including drugs to treat chronic conditions such as diabetes and hypertension, and 3,600 doses of polio vaccine.

The vast majority of those leaving the Old City were heading for the homes of relatives in other parts of Homs, according to the UN. There were at least a quarter of a million people living under siege conditions in other parts of Syria, said Laerke.

The Syria peace talks in Geneva were making little progress, the international mediator Lakhdar Brahimi said after the two sides held face-to-face talks on Tuesday. « The beginning of this week is as laborious as it was the first week, » Brahimi told reporters. He called on the government and the opposition to stop the « nightmare » of the civil war.

Syria’s civil conflict has claimed more than 100,000 lives since 2011 and has forced about six million people from their homes.