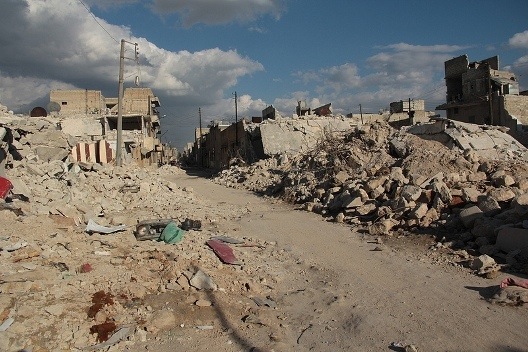 Each and every day that the barrel-bombing of Aleppo continues, the Asad regime reminds the world of its true colors. It is the latest barbaric act of a regime that has committed organized, wholesale torture, used chemical weapons, and is starving whole communities by blocking delivery of food to Syrian civilians in urgent need.

Now, with air raids killing dozens more civilians in just the past few days, destroying apartment buildings, and barrel bombs striking a mosque today, the staggering civilian toll dramatically climbs. Each and every barrel bomb filled with metal shrapnel and fuel launched against innocent Syrians underscores the barbarity of a regime that has turned its country into a super magnet for terror. Given this horrific legacy, the Syrian people would never accept as legitimate a government including Asad.

While the opposition and the international community are focused on ending the war, as outlined in the Geneva communiqué, the regime is single-mindedly focused on inflicting further destruction to strengthen its hand on the battlefield and undermining hopes for the success of the Geneva II process. –Statement of Secretary of State John Kerry, February 4, 2014

Secretary Kerry’s statement on the Assad regime’s latest affront to civilization combines, in equal measure, eloquence and emptiness. One reads the words and likes each of them. One applauds the style and appreciates the substance. Yet in the end two words come to mind: what next?

What does the United States intend to do about this outrage? Condemn it in the strongest possible terms? Call on Bashar al-Assad to step aside? Point out that Assad has lost all legitimacy? Draw a red-line? Urge the parties to negotiate in good faith at Geneva?

Barrel bombs have been pushed out of helicopters onto schools, clinics, bakeries, and mosques for months. Is the administration taking notice now because it has discovered that a regime acting with triumphant impunity, thanks to Iranian and Russian support, is not playing by the rules at Geneva? Is the administration surprised? Shocked?

Historians will note that the only reason why the Assad regime had helicopters in 2014 with which to drop these hideous steel packets of encased fuel and shrapnel is because the United States did not destroy them all in the summer of 2013, along with fixed-wing aircraft, airfields, artillery, rockets, and missiles. A straightforward military mission of destroying or significantly degrading the regime’s ability to bring concentrated fires to bear on populated areas would, by now, have saved thousands of lives. This mission could have been completed in days: no slippery slope, no boots on the ground, no open-ended commitment to win what President Obama has characterized as someone else’s civil war, no Iraq part deux.

Instead, a killer was inadvertently left free to ply his trade, on the condition that he surrender one of his murder weapons—the one he had used to kill a small fraction of his victims. Even that deal—one entailing the salutary erasure of chemical weapons capabilities and the surrender of the weapons themselves—is now being slow-rolled by a regime whose cold contempt for the United States is palpable. Imagine: Foreign Minister Walid al-Muallem, a man who cannot possibly be unaware of the gross criminality for which he fronts in Geneva, demanding an apology from John Kerry as the price for a meeting! Mr. Muallem will someday mirror the role of the proverbial piano player in the house of ill-repute; the man who tells the police he had no idea what was going on upstairs.

News reports suggest that Secretary Kerry sought advice in Munich recently from former senatorial colleagues on ideas for the formation of a coherent US policy toward Syria. Here is one idea: tell Moscow and Tehran to get their client to cease and desist with war crimes and crimes against humanity before the Geneva II conference reconvenes. Tell them that if they cannot or will not do it through persuasion, friendly or otherwise, the United States will take the steps it deems appropriate at a time of its choosing to stop the kinds of abominations described so eloquently by John Kerry on February 4.

Frederic C. Hof is a senior fellow with the Atlantic Council’s Rafik Hariri Center for the Middle East.