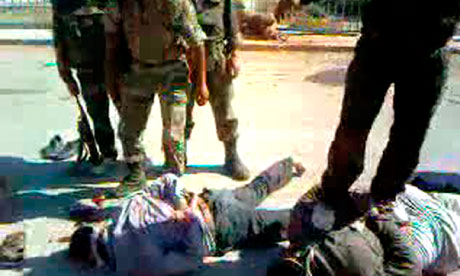 At least 88 people, including 10 children, have died in detention in Syriasince the uprising against the regime began in March in what amounts to « systematic persecution on a vast scale », according to Amnesty International.

The majority of victims were tortured or ill-treated, with injuries ranging from beatings, burns and blunt-force traumas to whipping marks, electrocution, slashes and mutilated genitals.

Amnesty documented the names, dates and places of arrest of victims, while independent forensic pathologists have established possible causes of death in some cases by examining film of the bodies.

Amnesty’s report was released as at least seven people were killed when thousands protested outside mosques following prayers to mark the end of the holy month of Ramadan.

A 13-year-old boy was among those killed when government forces opened fire in the southern province of Deraa. There were further deaths and injuries in the capital Damascus and the city of Homs, where people poured on to the streets to demand the removal of President Bashar al-Assad in defiance of tanks and troops, witnesses said.

Syrian state television showed Assad attending prayers at a mosque in Damascus. In mounting pressure on the regime, the US expanded sanctions to three « principal defenders of the regime » including presidential adviser Bouthaina Shaaban and foreign minister Walid al-Muallem, both of whom had been part of the pro-reform wing of the regime.

At least 2,200 people have been killed since the start of the uprising, according to the UN, as Syrian forces have sought to crush the rebellion, part of the revolutionary wave sweeping across the Arab world. The crackdown against protesters has intensified during Ramadan.

Amnesty said those who died in custody over the last few months are believed to have been detained because they took part in protests, or were suspected of involvement in them.

The dead included Hamza al-Khateeb, a 13-year-old boy detained at the end of April in Deraa. His death sparked widespread outrage and protests after the corpse was returned to his family bearing evidence of severe torture, including a severed penis.

Video of 45 bodies of detainees, taken by family members or activists after they were returned to relatives or dumped on the roadside, was obtained by Amnesty and passed to forensic pathologists.

The injuries of Sakher Hallak, a 42-year-old doctor and father of two from Aleppo whose body was dumped days after his arrest on May 25, included broken ribs, arms and fingers, mutilated genitals and gouged eyes, Amnesty said.

His brother Hazem, a US-based doctor, told the Guardian Sakher had not been protesting but signed a statement calling on the authorities to end the violence against protesters and allow doctors to treat the injured.

« We think he was singled out because of this and also because he visited me in the US for three weeks, » Hazem Hallak said. « I think the authorities were very paranoid about his visit. »

A video clip of the body of Tariq Ziad Abd al-Qadr from Homs shows patches of missing hair, marks to the neck and penis possibly caused by electric shocks, whipping marks, stab wounds and burns, Amnesty said. There was evidence of torture or ill-treatment in at least 52 of the 88 cases, according to the report.

After a peak in and around Homs – where 40 of the 88 cases came from – new instances are reported on a daily basis.

« These deaths behind bars are reaching massive proportions and appear to [show] the same brutal disdain for life that we are seeing daily on the streets of Syria, » said Sammonds.

« The accounts of torture we have received are horrific. We believe the Syrian government to be systematically persecuting its own people on a vast scale.

« In the context of the widespread and systematic violations taking place in Syria, we believe that these deaths in custody may include crimes against humanity. » Human Rights Watch is also verifying 70 reports of deaths in custody.

« There is no doubt that people have died in detention because of torture and other ill-treatment like lack of proper medical care, » Nadim Houry, a researcher in Beirut, said.

According to one activists’ group, at least 551 Syrian civilians have been killed during Ramadan, which ends with the festival of Eid al-Fitr.

A local network of activists said Syrians were keeping Eid celebrations to a minimum this year out of respect for the families of those who had been killed or are in detention. « There will be no happiness while the martyrs’ blood is still warm, » it said in a statement

In protests in Harasta, a suburb of Damascus, protesters shouted: « The people want the downfall of the president. »

In neighbouring Saqba, crowds held shoes in the air as an insult to the president.

*Nour Ali is the pseudonym for a journalist based in Damascus