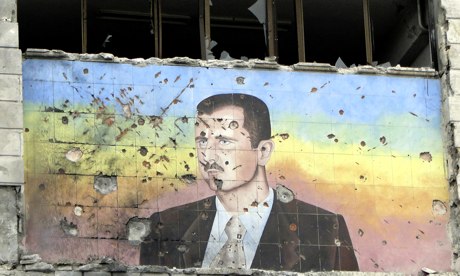 Calls for Assad or other officials to face justice at the international criminal court in The Hague have foundered on the problem that Syria is not a member of the court. Photograph: Reuters

Syrian government officials could face war crimes charges in the light of a huge cache of evidence smuggled out of the country showing the « systematic killing » of about 11,000 detainees, according to three eminent international lawyers.

The three, former prosecutors at the criminal tribunals for the former Yugoslavia and Sierra Leone, examined thousands of Syrian government photographs and files recording deaths in the custody of regime security forces from March 2011 to last August.

Most of the victims were young men and many corpses were emaciated, bloodstained and bore signs of torture. Some had no eyes; others showed signs of strangulation or electrocution.

The UN and independent human rights groups have documented abuses by both Bashar al-Assad‘s government and rebels, but experts say this evidence is more detailed and on a far larger scale than anything else that has yet emerged from the 34-month crisis. 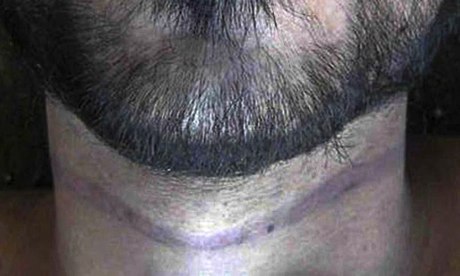 One of the images contained in the report, purpotedly showing ligature marks across the neck of a prisoner. Photograph: The report

The three lawyers interviewed the source, a military policeman who worked secretly with a Syrian opposition group and later defected and fled the country. In three sessions in the last 10 days they found him credible and truthful and his account « most compelling ».

They put all evidence under rigorous scrutiny, says their report, which has been obtained by the Guardian and CNN.

The defector, who for security reasons is identified only as Caesar, was a photographer with the Syrian military police. He smuggled the images out of the country on memory sticks to a contact in the Syrian National Movement, which is supported by the Gulf state of Qatar. Qatar, which has financed and armed rebel groups, has called for the overthrow of Assad and demanded his prosecution.

The 31-page report, which was commissioned by a leading firm of London solicitors acting for Qatar, is being made available to the UN, governments and human rights groups. Its publication appears deliberately timed to coincide with this week’s UN-organised Geneva II peace conference, which is designed to negotiate a way out of the Syrian crisis by creating a transitional government.

Caesar told the investigators his job was « taking pictures of killed detainees ». He did not claim to have witnessed executions or torture. But he did describe a highly bureaucratic system.

« The procedure was that when detainees were killed at their places of detention their bodies would be taken to a military hospital to which he would be sent with a doctor and a member of the judiciary, Caesar’s function being to photograph the corpses … There could be as many as 50 bodies a day to photograph which require 15 to 30 minutes of work per corpse, » the report says.

« The reason for photographing executed persons was twofold. First to permit a death certificate to be produced without families requiring to see the body, thereby avoiding the authorities having to give a truthful account of their deaths; second to confirm that orders to execute individuals had been carried out. »

Families were told that the cause of death was either a « heart attack » or « breathing problems », it added. « The procedure for documentation was that when a detainee was killed each body was given a reference number which related to that branch of the security service responsible for his detention and death.

« When the corpse was taken to the military hospital it was given a further number so as to document, falsely, that death had occurred in the hospital. Once the bodies were photographed, they were taken for burial in a rural area. »

Three experienced forensic science experts examined and authenticated samples of 55,000 digital images, comprising about 11,000 victims. « Overall there was evidence that a significant number of the deceased were emaciated and a significant minority had been bound and/or beaten with rod-like objects, » the report says.

« In only a minority of the cases … could a convincing injury that would account for death be seen, but any fatal injury to the back of the body would not be represented in the images …

« The forensics team make clear that there are many ways in which an individual may be killed with minimal or even absent external evidence of the mechanism. »

De Silva told the Guardian that the evidence « documented industrial-scale killing ». He added: « This is a smoking gun of a kind we didn’t have before. It makes a very strong case indeed. »

Calls for Assad or others to face justice at the international criminal court in The Hague have foundered on the problems that Syria is not a member of the court, and that the required referral by the UN security council might not be supported by the US and UK or would be blocked by Russia, Syria’s close ally.

Nice said: « It would not necessarily be possible to track back with any degree of certainty to the head of state. Ultimately, in any war crimes trial you can imagine a prosecutor arguing that the overall quantity of evidence meant that the pattern of behaviour would have been approved at a high level.

« But whether you can go beyond that and say it must be head of state-approved is rather more difficult. But ‘widespread and systematic’ does betoken government control. »

« This is amazing. This is the type of evidence a prosecutor looks for and hopes for. We have pictures, with numbers that marry up with papers with identical numbers – official governmentdocuments. We have the person who took those pictures. That’s beyond-reasonable-doubt-type evidence. »

A US administration official told the Guardian on Monday: « We stand with the rest of the world in horror at these images which have come to light. We condemn in the strongest possible terms the actions of the regime and call on it to adhere to international obligations with respect to the treatment of prisoners.

« We have long spoken out about mistreatment and deteriorating prison conditions in Syria. These latest reports, and the photographs that support them, demonstrate just how far the regime is willing to go to not only deny freedom and dignity to the Syrian people, but to inflict significant emotional and physical pain in the process. To be sure, these reports suggest widespread and apparently systematic violations of international humanitarian law.

« The regime has the ability to improve the atmosphere for negotiations in Geneva by making progress in several areas. However, this latest report of horrific and inhumane prison conditions/actions further underscores that if anything, it is tarnishing the environment for the talks.

« As we have for over two years, and again today, we call on the Syrian government to grant immediate and unfettered access to all their detention facilities by international documentation bodies, including the UN Commission of Inquiry on Syria.

« We have long said that those responsible for atrocities in Syria must be held accountable for their gross violations of human rights. The United States continues to support efforts to promote accountability and transitional justice, and we call on the international community to do the same. »

William Hague, the UK foreign secretary, said: « This report offers further evidence of the systematic violence and brutality being visited upon the people of Syria by the Assad regime. We will continue to press for action on all human rights violations in Syria, and for accountability for those who perpetrate them. »

Nadim Houry of Human Rights Watch said his organisation had not had the opportunity to authenticate the images. But he added: « We have documented repeatedly how Syria’s security services regularly torture – sometimes to death – detainees in their custody.

« These photos – if authentic – suggest that we may have only scratched the surface of the horrific extent of torture in Syria’s notorious dungeons. There is only one way to get to the bottom of this and that is for the negotiating parties at Geneva II to grant unhindered access to Syria’s detention facilities to independent monitors. »