Hillary Clinton in Riyadh for talks amid concern Saudi Arabia and Qatar are planning to arm anti-Assad regime rebels. 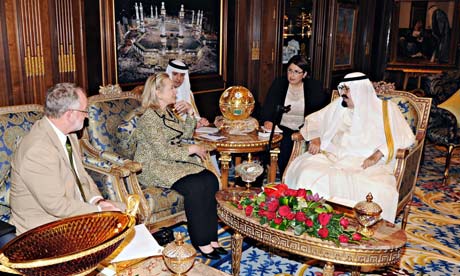 The US is urging Saudi Arabia to support international diplomatic efforts to resolve the bloody crisis in Syria amid concern that the Saudis and Qatar are planning to arm the rebels fighting to overthrow President Bashar al-Assad.

On a day that saw now-familiar Friday protests and killings across Syria, the US secretary of state, Hillary Clinton, was in Riyadh for talks with King Abdullah and other Saudi leaders as part of what was billed as an effort to pressure Assad.

Clinton, the British foreign secretary William Hague, and dozens of other western and Arab foreign ministers will be in Istanbul on Sunday for a meeting of the Friends of Syria group, designed to demonstrate resolve and orchestrate action against the Damascus regime.

The last time the group met the Saudis said it was « a good idea » to arm the Syrian rebels and create a safe haven on the Turkish border. The US, UK and most western and Arab countries, which united to support the anti-Gaddafi Libyan rebels last year, disagreed.

Diplomats and analysts insist there is still no hard evidence of Saudi or Qatari supplies to the Free Syrian Army (FSA), the main armed wing of the opposition. « There is a lot of lobbying but little sign they have acted on it, » said one western official.

The Saudis have reportedly been pressing Jordan to allow weapons across their border into Syria, so far to no avail. Turkey is also preventing arms transfers.

For all the talk, the FSA is still only lightly armed. « They are organised locally and armed with nothing more sophisticated than AK-47 assault rifles, RPGs, and PK machine guns, » according to Malik al-Abdeh, a London-based supporter of the Syrian National Council.

Syrian sources report that the price of a Kalashnikov rifle smuggled from Lebanon is now $2,000 (£1,250), compared with $300 before the crisis – hardly evidence of the easy availability of weapons. Similar inflation has been seen in the cost of arms coming from across the border with Turkey.

Advanced anti-tank missiles are one item that could shift the technological balance of power, military experts say. Another issue is whether the Saudis would support the Syrian Muslim Brotherhood or more hardline Salafi groups. Qatar, which also owns the influential Al-Jazeera TV, has close links with the brotherhood.

Syria insists weapons are being smuggled from neighbours, including Lebanon. It complained to the UN last week that there had been « multiple confiscations of weapons, explosives and explosive devices smuggled into Syria by Lebanese political forces linked to terrorist groups funded and armed from abroad ».

The focus in Istanbul will be on the six-point plan being promoted by Kofi Annan, the former UN secretary-general. It calls for a ceasefire, humanitarian and media access, the release of prisoners and, crucially, a « Syrian-led political process », though not for Assad to step down, as the opposition demands.

It is supported by both Russia and China, which blocked earlier UN security council action against Assad. But both are wary of anything that smacks of externally-backed regime change.

In his first response to the plan the Syrian president made his agreement conditional on an end to support by unnamed countries for what he called « armed terrorist groups ». But Annan rejected this approach. « The government must stop first and then discuss a cessation of hostilities with the other side and with the mediator, » his spokesman, Ahmad Fawzi, insisted on Friday. « We expect him to implement this plan immediately. »

On the ground in Syria there is evidence the FSA is coordinating more effectively. On Thursday it announced the creation of a national command linked to regional-based units. It also claimed a rocket attack on a post of the hated Air Force Intelligence in Arbeen near Damascus, al-Arabiya TV reported.

The local co-ordination committees, an activist network, reported 37 people killed on Friday. Fighting was reported between government forces and rebels in Idlib province.

The UN estimates that more than 9,000 people have been killed since the Syrian uprising began last March.