The British government is expected to launch its plans to tackle the use of sexual violence in war at the UN later this week, with Foreign Secretary William Hague saying the perpetrators must not get away with using rape as a weapon.

In Syria, details continue to emerge of sexual violence against prisoners, and the BBC’s Fergal Keane has been hearing harrowing stories of some former detainees.

Warning: Some of the details in his report are distressing

The witness was working as an activist with a church-based human rights group when he was arrested last November.

The witness says his captors demanded that he confess to smuggling weapons and sending footage of demonstrations to foreign news organisations.

« They hit me, they kick me, they slap me and they (did) something unfriendly and offensive… I know what happens when they arrest someone. I feel like this is the end. » 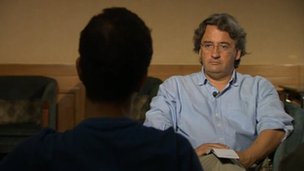 The « rapist officers » behaved like animals, the former detainee says

At first, he says, a security official began to touch him sexually. There was also an officer who watched what was happening but remained silent. Then he was attacked by a group of three officers.

As he was being raped, he says his attackers mocked him. « You want Assad to quit? This is for saying that you don’t like Bashar al-Assad. »

A teenage boy was brought into the cell. He, too, was raped. As the assault went on, the boy cried out for his mother.

But – in the words of another survivor – the torture cells of Syria are places where « nobody hears your voice, nobody visits you ».

Another witness, a woman, told me she had been held for two months in the notorious Palestine Branch of Military Intelligence in Damascus – a building bombed by rebels last May.

The woman was arrested at a checkpoint in Homs late last year.

As part of the torture, she alleges, rats and mice were used by interrogators to violate women. She described an assault on another prisoner which she says she witnessed.

« He inserted a rat in her vagina. She was screaming. Afterwards we saw blood on the floor. He told her: ‘Is this good enough for you?’ They were mocking her. It was obvious she was in agony. We could see her. After that she no longer moved. »

In the absence of other witnesses and with UN human rights investigators refused access to Syria, independent verification of rape claims is impossible. It is equally difficult to estimate the number of rape cases.

According to the campaign group Human Rights Watch, the stigma surrounding such allegations means many victims are reluctant to come forward. 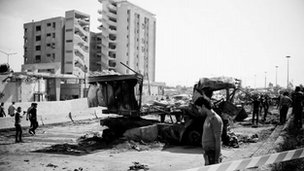 « In many cases… victims did not want their families or others in the community to know about the assault because of fear or shame », the group said.

Human Rights Watch says sexual violence is used to degrade and humiliate prisoners. Neither they nor the United Nations have so far made allegations of sexual violence against the rebel side.

According to the latest report from the UN, sexual violence is part of a pattern of crimes against humanity inflicted on civilians in Syria.

The Syrian government has consistently rejected such accusations and has dismissed the latest UN report as « neither fair nor objective ».

Rape is one of the oldest scourges of war. But in recent times there have been moves to strengthen the response of the international community.

Landmark judgements in the tribunals for the former Yugoslavia and Rwanda were meant to signal the beginning of the end of a culture of impunity.

The UN’s High Commissioner for Human Rights, Navi Pillay, has called for the allegations against the Syrian government, including sexual violence, to be referred to the International Criminal Court.

However, deep divisions on the UN Security Council between Syria’s enemies and supporters make such a referral highly unlikely.