Syria Has Effectively Ceased to Exist BY JONATHAN SPYER

With Russians and Iranians in control in Damascus, the U.S. bolstering rebels, and no one powerful enough to press for unification, the breakup of Syria is a fait accompli. 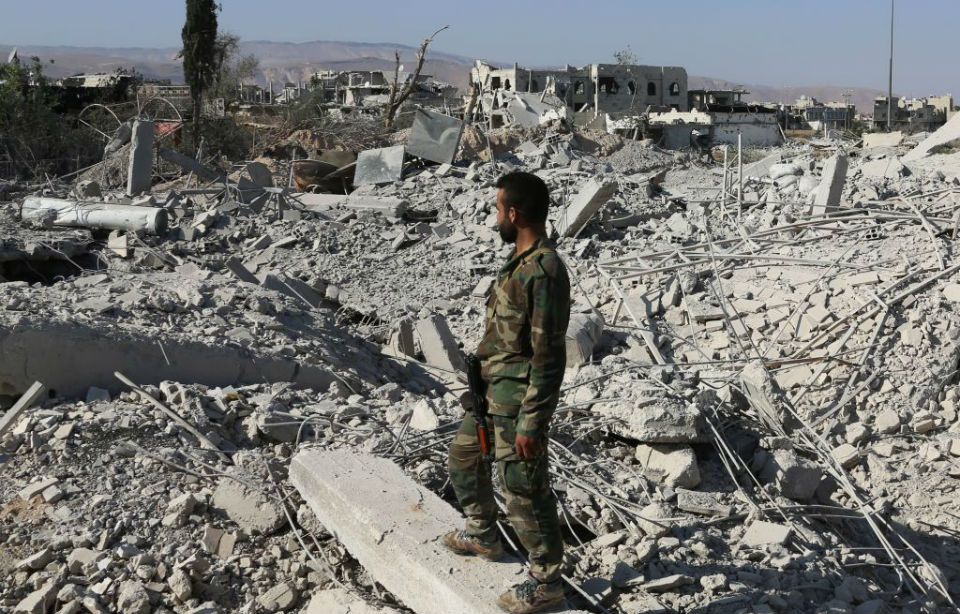 DAMASCUS, Syria — On my last night in Damascus, some younger members of the Information Ministry-sponsored delegation in which I was taking part decided to have a drink. It was late April, and the bars and restaurants were doing good business in the cool and breezy evenings. An inebriated Russian journalist, accompanied by a uniformed Russian soldier, entered the bar opposite our hotel in the Old City where my colleagues were sitting. Words were exchanged. An altercation began.

At a certain point, the Russian journalist produced a pistol and aimed it at the forehead of one of the delegation’s participants. He then entered our hotel and threatened one of the employees there, all with his uniformed colleague silently accompanying him.

How the incident ended says much about who truly holds power in regime-controlled areas of Syria today. After the two Russians had departed, the delegation’s participants sought to contact the authorities and report the incident. The representative of the Syrian security forces asked if the armed men were Russian. When told that they were, he replied that there was nothing the Syrian authorities could do.

Six years into the Syrian war, the survival of President Bashar al-Assad’s regime is ensured

Six years into the Syrian war, the survival of President Bashar al-Assad’s regime is ensured — but it has become something of a facade and lacks a strategy for reuniting the country. The sometimes sharply differing interests of Russia and Iran from above, and the local concerns of a myriad array of pro-regime irregular militias from below, are the decisive factors — not the decisions of the country’s nominal rulers. This impacts the calculus of the “regime” side in the war, in determining its strategy in the conflict.

Just take a look at how the war has developed since late last year, when things seemed to be going well for the regime. The rebellion had been driven out of its last fingerholds in eastern Aleppo city, seemingly paving the way for the eventual defeat of the insurgency. But five months later, while the general direction of the war has been against the rebels, they appear still far from collapse. Idlib province, areas of Latakia, Hama, northern Aleppo, and large swaths of the south remain in rebel hands.

The rebels in the south received a boost this week when a coalition airstrike targeted forces loyal to Assad that were advancing on a base used by U.S. and British Special Forces. If the United States and its partners are willing to use force to defend allied groups in the area, it is hard to envision how the regime can hope to reestablish its rule there.

Further east, the war against the Islamic State is being prosecuted by a powerful U.S.-backed, Kurdish-led force called the Syrian Democratic Forces (SDF). This force will shortly embark on the conquest of Raqqa, the last remaining city in Syria fully controlled by the retreating Islamic State.

In other words, the rumors of the death of the rebellion have been greatly overstated. And some of its component parts apparently possess considerable vigor and strength. Does the Assad regime have a strategy for the reunification of the country, or has Syria’s fragmentation now become an unavoidable reality?

In 10 days of meetings with mid-level and senior officials of the Assad regime in Syria, I sought an answer to this question. What I found was a considerable gap between the intentions of the regime and its practical abilities to bring these desires about.

The Ministry of Reconciliation Affairs, Haider says, could spearhead a “comprehensive political resolution” of the Syrian conflict.  More than 100 towns and villages have now “achieved reconciliation,” Haidar told our delegation, and 3 million Syrians have been included in the reconciliation process, constituting “40 percent of Syrians affected by the war.” The regime’s strategy appears to be to use these gradual and incremental reconciliations to eventually whittle the rebellion down to nothing.

What Haidar failed to mention, however, was that this latest agreement was achieved with the mediation of Qatar, a strong supporter of the rebels. And the various agreements so far have served more to demarcate regime and rebel territory and create more cohesive enclaves than to substantially further increase the territory held by the regime.

The term “reconciliation” is a misnomer, of course.

The term “reconciliation” is a misnomer, of course.The regime is interested in the surrender of the rebels, not rapprochement with them. But given the balance of forces and the slow progress, there seems to be a gap between objective and method. In light of this, I ask Haidar: What is the regime’s strategy for victory and the reunification of the country?

What needs to happen, the minister suggests, is an end to foreign interference. “We ask foreign powers to stop supporting the terrorist organizations,” he said.

“Terrorists,” of course, is the regime’s description of choice for rebel forces. But if foreign supporters of the insurgency decline to withdraw their support, as currently appears to be happening, how can the regime coerce them into doing so? Haidar did not appear to have any answers.

I got no further with Mohammed Tourjman, Assad’s fluent and glib information minister. Tourjman is an articulate presenter of the narrative the regime likes to share with its supporters.

“There is a plan to divide Syria into cantons,” he told us. “[T]o keep us weak, to benefit the Zionist entity.”

If this is the plan, it seems to be in an advanced state of execution. Syria, after all, is today divided into no less than seven enclaves: the territory controlled by the regime, three separate areas of rebel control, two Kurdish cantons, and the Islamic State area. What is the government’s strategy to reverse this fragmentation, I ask? “We have absolute faith that this is a temporary situation,” Tourjman replied. “[T]he major reason for this faith is that the Syrian people start to understand the conspiracy against them.”

In other words, there is no strategy at all, but the kind of conspiracy theories that no self-respecting Baathist should be without.

In other words, there is no strategy at all, but the kind of conspiracy theories that no self-respecting Baathist should be without. In fact, no evidence exists of any overarching plan to divide Syria — nor do any of the major forces in the country support its breakup. Syria’s de facto division is a result of the inability of any force to prevail over all the others, not of design.

In private conversation with officials who prefer not to be named, however, I found more candid responses. A serving general of the Syrian armed forces, puffing on an enormous cigar in his office, noted carefully that “any decision to conclude the war cannot come without the involvement of ‘official Syria’” — meaning the regime.

This measured reply delineates the actual situation well. The regime cannot now be militarily defeated, a significant success for its diplomacy and arms.  But neither has it any clear road to victory. I asked one Information Ministry official about the future of eastern Syria, given the growing strength of the U.S.-backed SDF in the region. His response summed up the underlying reality of the regime’s current position: “We don’t know.”

The reason for the regime’s lack of knowledge is that decisions made by Assad and those around him will not be the decisive factor in determining Syria’s future. As the fighting in eastern Aleppo showed, the government side only makes real progress when the Russians commit to ensuring its victory. So the crucial question is of Russian, not Syrian, intentions — and Moscow may well have already achieved most of what it came to Syria to achieve. It has ensured the safety of its bases in Latakia province and the survival of its regime allies, demonstrated the efficacy of Russian arms, and guaranteed there can be no diplomatic process to settle the war without Moscow’s involvement.

These are significant accomplishments. But it is also the case that a further Russian commitment to finishing off the rebellion could result in the unpleasant situation in which a cash-strapped Russia finds itself saddled with the responsibility for the reconstruction of a ruined Syria on the basis of “you broke it, you own it.”

The diplomacy emerging from ongoing peace talks in Astana, Kazakhstan, appears to suggest that Moscow is aiming to freeze the Syrian conflict more or less in place, followed by an ongoing political process. The formation of the four “de-escalation zones” looks set to leave the rebellion in control of large swaths of the country, while the upcoming assault on Raqqa by the SDF and the increasingly open U.S. commitment to this force raises the possibility of a U.S.-backed entity emerging east of the Euphrates.

With the regime and rebels now effectively reduced to client status and no great desire on the part of the patrons to commit to absolute victory for their proxies, the diplomacy on the Syrian war should presumably shift toward arrangements acknowledging the fragmentation of the country. Such arrangements would be built more or less around the status quo that will hold sway after the destruction of the Islamic State’s holdings in eastern Syria. That is, Syria will be divided between the regime enclave in the west, the Sunni Arab rebels in the northwest and southwest, a Turkish-ensured rebel enclave in the north, an SDF-controlled region in the northeast, and some arrangement involving both the SDF and Western-backed Arab rebels in the east.

As this process plays out, the Russians will continue to do as they wish by day and night in Damascus, the gap between regime rhetoric and reality will remain as gaping as ever, the rebels and the Kurds will continue to march in tune with their own patrons’ wishes. Meanwhile, the stark fact will continue to remain unsaid: namely, that the state known as Syria has effectively ceased to exist.