In acknowledging the likely use of chemical weapons in Syria, US President Barack Obama is nonetheless seeking to pursue a cautious path.

On the one hand he does not want to be stampeded into military action by more hawkish voices on Capitol Hill without conclusive and demonstrable evidence.

But equally he wants to send a strong message to the Syrian government in Damascus.

President Obama has spoken of the Pentagon preparing a range of options. Indeed there are a variety of things the Americans – with or without key allies – might do, but all involve varying degrees of risk and are by no means certain to alter the situation in Syria for the better.

The debate about the potential course of action in Syria has raged for months, with some arguing for a muscular intervention to topple the government and potentially end the fighting, while others have stressed the uncertainty of the factional in-fighting within the opposition and the limited ability of external actors – certainly Western external actors – to influence what kind of Syria emerges from the rubble of Bashar al-Assad’s government.

But the arguments for intervention of some kind are growing; brought to a head by the reported use of chemical weapons. The fear is not just about the potential death toll if they are used more widely; the death toll from conventional combat in Syria is already bad enough.

There is serious concern about such weapons falling into the hands of jihadist groups or Hezbollah, President Assad’s Shia allies in Lebanon. These arguments only reinforce fears that the longer the civil war goes on the greater the casualties and the growing likelihood that it might spill over into a wider regional conflagration.

So if action is being contemplated, what might the Obama administration do?

Weaponry is already going to the rebels, funded by rich backers in the Gulf.

If the US were to supply key weapons systems like anti-tank and anti-aircraft missiles along with crucial tactical training and communications, this – over time – might alter the balance of forces on the ground.

US special forces could be used to help train and co-ordinate the disparate rebel fighters, or help call in air strikes on targets, as some Western special forces did during the Libya conflict.

Supplying weaponry would be a least-risk option in terms of US lives, but it would potentially damage relations between Washington and Moscow. It might, in the shorter-term, just amplify the fighting and the suffering.

The supply of, say, sophisticated anti-aircraft systems might also pose problems, given the predominance of jihadist fighters in the most effective rebel brigades. Americans are well aware of the « blow-back » suffered in Afghanistan when weaponry supplied to the anti-Soviet mujahideen later turned up in the hands of groups with goals inimitable to the West.

A punitive air strike might be considered by Washington as a demonstration to encourage the Syrian government not to have recourse to chemical weapons – if indeed it was the government that used them in the first place. This could be carried out by cruise missiles launched from aircraft well outside Syrian airspace or from warships or submarines in the Mediterranean. 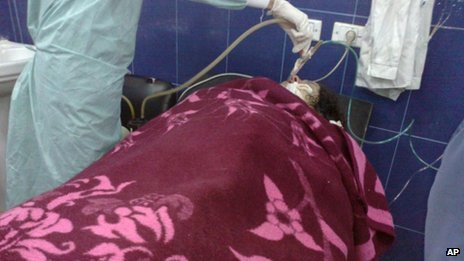 Rebels claim people were injured in a chemical attack in Aleppo

This again might be a limited risk option, though great care would have to be taken when considering the targets.

It is far from clear whether chemical weapons facilities or stores could be struck without a considerable risk of the release of dangerous chemicals into the atmosphere. Warplanes could also be used to strike targets inside Syria, but here the country’s air defence system would have to be considered.

A further option would be to embark upon a much more extensive air campaign.

But how effective are Syria’s air defences? Syria certainly has a much more advanced air defence system than Libya. It is a layered system with different weapons covering different altitudes and ranges. Syria has purchased modern Russian surface-to-air missiles like the SA-22 Pantsir-S1 and the SA-26, a much upgraded version of the old Soviet SA-3 system.

Information about how many such systems have been delivered, or the extent to which Syria’s air defence system remains an integrated whole, is not publicly available. It is hard to disentangle real facts from spin, with strong indications that some people are eager to play up the effectiveness of Syria’s defensive system, perhaps to deter Mr Obama from going down this route.

Sean O’Connor, a military expert contacted by the BBC, is less than impressed with Syria’s air defence system as a whole. His verdict is that « relying upon Soviet era surface-to-air missile systems – even upgraded models – puts Syria at a considerable disadvantage and hinders its ability to mount a credible defence against a modern air arm outfitted with the latest in precision-guided munitions and electronic counter measures ».

So Syrian air defences are by no means insurmountable. But any larger US air action might have to be preceded by a significant effort to destroy missiles, associated radars and command systems and might well involve losses. Opinion polls suggest that there is no great appetite among the US public for a major military operation against Syria.

Some have argued that a humanitarian air exclusion zone could be established in border areas of Syria potentially covered by US and Nato Patriot missiles based in Turkey. To be meaningful, such a zone would also have to be backed up by fixed-wing aircraft entailing all the risks outlined above. 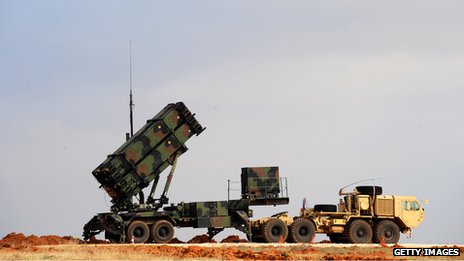 It is clear that such a zone might also be problematic to set up, involving several other alliance members, and would probably require a decision by the alliance as a whole.

By far the least likely option in the present circumstances is a direct US ground involvement, though some contingency planning has clearly been carried out with regard to securing Syria’s chemical weapons stocks in the event of the collapse of the Assad government. A US military headquarters and specialist personnel have been deployed to Jordan and there have been reports of training with special forces from a number of Arab countries.

The break-up of Syria with chemical weapons on the loose is the nightmare scenario in Washington. But how feasible such a safe-guarding mission might be in the chaos of a post-Assad Syria must remain open to doubt. If this meant being invited into an essentially benign situation by whoever holds the reins of power in Damascus, that might be one thing. But in all likelihood, Syria on the day after Assad’s potential departure or demise might be a chaotic and fragmented place with no clear lines of authority and some militia groups openly hostile to a US military role.

All in all it is an unpalatable series of options, each with its own attendant risks. Syria remains an intractable conflict for outsiders, but with Russia continuing to back President Assad and calls for a political solution gaining little traction, the chemical weapons issue has brought matters to a head. President Obama has a difficult call to make.