Syria, squeezed between the sides, falling through the cracks by marcusxl

” Whoever killed your son wanted to pass it off as a suicide. And the cops are happy enough to have one less murder to investigate.[..] District Attorney doesn’t give a fuck; I’m not supposed to give a fuck; I guess your son just got squeezed between the sides.
I kinda liked your son, y’know? [..] And it grinds me that no-one ever spoke up for him. It seems to me that no-one ever will. “
~ Det. McNulty, ‘The Wire’. Season 3. Ep: “Moral Midgetry’ 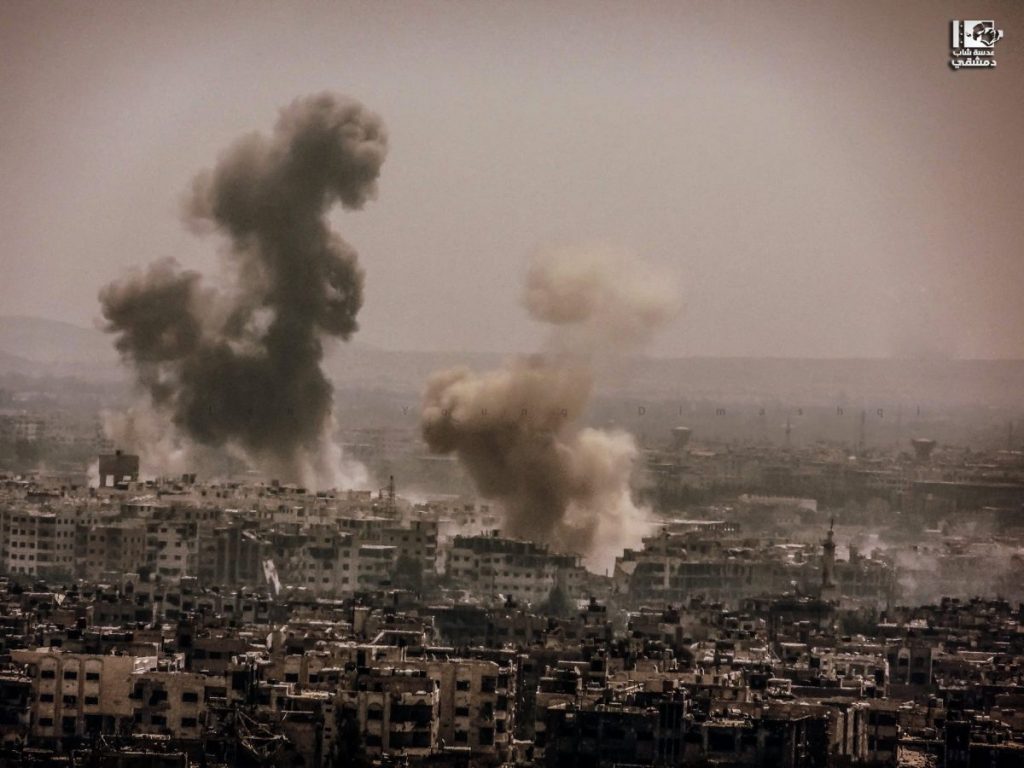 It is ironic (or at least instructive) that Obama’s favourite TV show is “The Wire”, which is the best mainstream, artistic expression of how this kind of “acceptable injustice” destroys the fabric of society and breeds more injustice, deepening and widening the divide between the People and the Powers That Be, who are supposed to protect them, to redress the balance. As a black American from (among other places) Chicago, he must have experienced this. The president’s inaction and ‘moral midgetry’ in Syria is a particularly sad example of how people who are repeatedly victimized are acclimated to the abuse, taught to see it as normal and acceptable, to forgive it and excuse it, and even to turn into victimizers themselves.

How can we expect Syrians to welcome airstrikes without smelling a rat, when the very word ‘airstrike’ is enough to elicit terror and dread, after three years of bombings by the Assad regime targeting the families? And they are doubly wary of strikes against “headquarters,” the locations of which are known publicly, and therefore not occupied by real targets, and in urban areas where they are likely to kill civilians. Already, in Kafr Darayan, Idlib, we have reports of civilians killed by American airstrikes on these static targets.[1]

The US has the capability to, and must seize the opportunity to destroy ISIS columns on their way to battlegrounds, cutting off their access to new fronts and putting them on the defensive. And then, once the FSA and other revolutionaries are strong enough to attack ISIS strongholds, the revolutionaries can provide minute-by-minute intelligence on ISIS targets.

Together, the FSA and the Coalition have the capability to neuter ISIS and eliminate their ability to control exposed areas (like oil fields), which will condemn them to a slow but unstoppable decline and eventually destruction at the hands of revolutionary Syrians, who actually have the support of the population. Will the US do this? There are serious doubts. But this should be the goal, and not ‘cosmetic’ attacks on ISIS “HQs”.

ISIS would not have returned from its near-death experience in Iraq if it were not for a structural gap in the system of justice in the world, in which lies the justification (however tortured) for their existence. The Sunni Muslims of the world are forced to watch the Assad regime butcher their brothers and sisters in Syria, and the former al-Maliki regime in Iraq steal back all the hard-won concessions gained during Iraq’s civil war. One of these regimes is an American client; the other exists with the tacit approval of the American president.

How can we answer the claims of ISIS supporters, that the American leadership does not care a bit about justice or humanity, and only wants to crush the hopes of Sunni Muslims for a nation in which they do not have to fear oppression, reprisals for free speech, torture and murder at the hands of their rulers? The fact that ISIS commits every single one of these crimes is only further proof of Syrian Sunni Muslims’ desperation, after more than 3 years of crimes against their humanity, piled upon war crimes, piled upon ethnic ‘cleansing’?

After a thousand+ days of begging for help, of human agony, and bold-faced excuses for massacres; after three years worth of images of children knifed to death and thrown on garbage piles[2], videos of Assadi thugs torturing Syrians, of barrel bombs and Sarin nerve gas launched at defenceless populations, the US is finally bombing Syria. But only against ISIS.
Not against the Assad regime.
Not the people who used (and still use) chemical weapons on thousands of women and children.
Not the people who created an industrial-scale murder machine in his torture-prisons, like we haven’t seen since Treblinka and Sobibor in the Shoa-Holocaust.
Not the people who drop barrel-bombs on neighbourhoods across Syriaevery single day.

Has there ever been a more tangible example of injustice, hypocrisy, and shameful double-standards?