In recent days, human rights groups and opposition activists say some 200 people have been killed by Syrian security forces in the hills and villages of the north-western province of Idlib.

Most of those killed in the Jabal al-Zawiya area, 40km (25 miles) south-west of the provincial capital Idlib, have reportedly been army defectors.

In what activists say was one of the deadliest massacres of the nine-month uprising against President Bashar al-Assad, up to 70 soldiers were mown down by machine-guns on Monday after hundreds fled their positions between the villages of Kafrouaid and Kansafra.

Survivors said they had been attempting to reach Turkey, not far away to the north-west, where other defectors have formed the Free Syrian Army, a rebel group that has mounted increasingly deadly cross-border raids.

The state news agency, Sana, said security forces in the area had killed at least one « terrorist » and wounded several others.

On Tuesday, government forces backed by tanks reportedly launched an operation to hunt down the defectors who managed to escape.

Activists said there was fierce fighting around Kafrouaid for much of the day, as troops picked off the defectors one-by-one. They then reportedly fired on civilians trying to flee to nearby woods out of fear of detention.

The London-based Syrian Observatory for Human Rights said at least 111 had been killed in an « organised massacre ». The Local Co-ordination Committees, another activist group, put Tuesday’s death toll at 100. 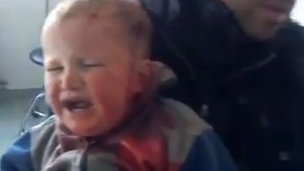 But a Lebanese human rights activist, Wissam Tarif of the campaign group Avaaz, told the BBC that 269 had died in Idlib on Tuesday alone – 163 of them defectors, but also 97 government troops and nine civilians.

Events in Syria are hard to verify because the authorities have banned most independent reporting, but Mr Tarif said his information came from a variety of trusted sources, including defectors, civilians in the area and medics at the National Hospital in nearby Maarat al-Numan, who had counted the soldiers’ bodies.

Mr Tarif said more and more Syrian soldiers were refusing to kill their own people, and defecting in huge numbers.

« We are seeing in different areas of Syria a resistance taking place, » he said. « The Arab League has called on the Syrian army to stop obeying its political leadership and therefore now we see a high number of defections in the army.

« In Jabal al-Zawiya alone, we are talking about more than 3,000 defectors. There is a number circulating of more than 10,000 soldiers in all [of Syria], » he added.

On Wednesday, the main opposition coalition, Syrian National Council, said 250 people had been killed on Monday and Tuesday in « bloody massacres » in Idlib, and called on the UN to set up safe havens.