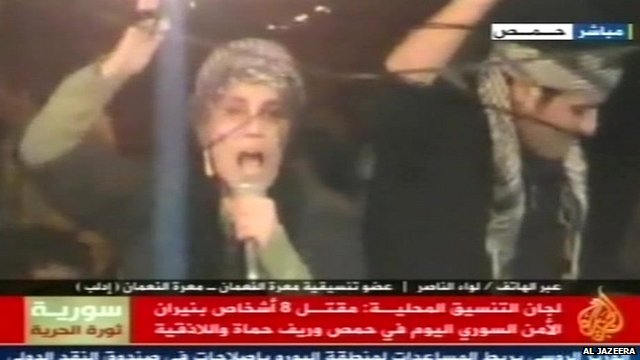 Fadwa Sulayman, a Syrian actress and opposition activist, made a courageous stand in appearances in the city of Homs, which was broadcast live on Al-Jazeera on 7 and 8 November.

The footage from Homs marked a new stage in the transmission of video footage of opposition protests in Syria. It appeared to be shot using a professional, high-resolution camera with zoom capabilities.

This is a far cry from the first images of demonstrations in March, which were grainy, shaky clips filmed on mobile telephones and distributed via slow internet connections.

Since then, activists have developed the capability to deliver live video streams from cameras overlooking key sites, such as the protests which have been held weekly after Friday prayers.

But interviews with foreign TV channels have been conducted solely by phone, with no accompanying video.

Ms Sulayman – who has appeared in theatrical productions, films and television serials – was interviewed live by Al-Jazeera on 7 November. She was shown speaking by phone from a balcony overlooking night-time street protests in a district in Homs.

The next day, another live transmission showed her addressing a small crowd of protesters together with Abd al-Basit Surat, a member of a local football team.

Her appearances on the channel were the subject of a feature article in the Beirut daily Al-Akhbar on 9 November under the headline: « Fadwa Sulayman goes down to the street ».

The article noted that she had supported the protests since the beginning, organising women’s demonstrations and calling for the planting of olive trees in memory of those killed.

Al-Akhbar said Ms Sulayman’s stance was in contrast to the majority of Syrian artists, who had ignored the bloody events in the country.

It was all the more notable because she is from the same minority sect as President Bashar al-Assad, the Alawite.

Others who have spoken out in Syria have paid a heavy price.

In August, noted political cartoonist Ali Farzat was attacked in Damascus and had his hands broken. His « crime » seems to have been some of the cartoons he drew had satirised Mr Assad.

Ibrahim Qashush was a singer who wrote a song calling for the president’s ouster. His body was found in Hama in July with his throat cut.

Ms Sulayman’s appearance on Al-Jazeera produced dozens of Facebook pages, some supportive, some critical, according to Al-Akhbar.

One site attracted 1,500 supporters in less than 24 hours.

But the pages also registered sharp attacks from supporters of the regime, some of whom accused the actress of seeking publicity in order to revive her career.

When speaking to Al-Jazeera, she said she realised the risks she was taking by appearing on the channel. But, she said, « freedom has its price and we all have to share in paying it ».

BBC Monitoring selects and translates news from radio, television, press, news agencies and the internet from 150 countries in more than 70 languages. It is based in Caversham, UK, and has several bureaux abroad.