Internationally acclaimed Syrian artist, Youssef Abdelke, has today been arrested by regime forces at a checkpoint in Tartous 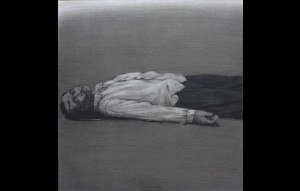 Youssef Abdelke is an internationally acclaimed Syrian artist. He is of revolutionary stock – his father was imprisoned many times during the ‘60s and ‘70s. He himself, a member of the Communist Labor Party, spent the best part of 1978 to 1980 incarcerated. Following this he spent years in self-imposed exile in Paris, until his nostos in 2005. On his return, he remained candid about his disenchantment with the Syrian condition: ““There’s a false image of openness now. The authorities are still controlling everything, and you can’t even hire a cleaning woman without the security services’ permission.”

Abdelke was arrested earlier today by Assad forces in Tartous. According to Abdallah Amine el Hallak, the Syrian writer working for the Samir Kassir foundation and former colleague of Abdelke’s at Annaharnewspaper, he was with two friends from the Syrian Communist party, Toufic Omran and Adnan Adebes. Hallak lost contact with Abdelke on his personal phone yesterday: “today we knew he was arrested at a checkpoint by the political police forces.” He is the most recent in a diverse catalogue of creatives and intellectuals to fall foul of a lethally flailing regime.

The targeting of intellectuals and creatives in times of political upheaval is not unique to Syria. Governments throughout history and spanning the globe have been afraid of pens, brushes, voices, and strings for their ability to criticize, eloquently and rousingly, and to galvanize others into action. The Assad regime’s problem with intellectuals dates back to long before the revolution began: “the regime has a historical issue with the intellectual,” explains Hallak. “For example, there was the Damascus spring between 2000 and 2001. It was a political and intellectual movement led by intellectuals. The regime back then arrested all the intellectuals.”

The last few years have seen thinkers and artists – from the dissident cartoonist Ali Ferzat who was arrested and had his hands broken, to ‘The Singer of the Revolution’, Ibrahim Kashoush, who had his throat cut in Hama – targeted with heightened brutality by the regime. For Hallak, the reasons for this are obvious: “the regime doesn’t want any free democratic voice during its war against the Syrian people.”

“The regime has… arrested many of them [creatives], during its war against the Syrian people who went out asking for freedom…,” he continues, “May Skaf, and Fouad Hamire, and today it was Youssef’s turn.”

Abdelke’s work has varied greatly throughout his career. In the 70s, a style not visually dissimilar from that of Soviet propaganda posters prevailed. For a long time his focus fell largely on charcoaled still lifes on mammoth canvases – somewhat sinister and macabre, deeply evocative, depictions of nails, fish, knives, and skulls. These static depictions were teeming with political significance and power. In recent years – during an evolution he saw as a natural result of prevailing political winds – his brushes and charcoals turned to people: martyrs and their mothers. He found “a noble sentiment” present in his own recent work that he’d found absent before.

For Hallak, this nobility reaches further than the surface of his latest works: “Youssef is a politician, and he is an intellectual loyal to his ideology of freedom. He reflected his ideology throughout his paintings and art. Freedom is a political art, and this act became a national ideology and cause two years ago, since the start of the revolution.”

In an interview three years ago Abdelke said: “today the world media knows when a dissident is jailed, which wasn’t the case when I was imprisoned. But this creates an impression that there’s less of a problem, when actually things are just as bad or worse.”

Today, that jailed dissident is him.