WASHINGTON — The United States accused the Syrian government on Monday of using a crematory to hide mass murders at a prison where thousands are believed to have been summarily executed in the nation’s civil war.

The assertion, based on newly declassified satellite photographs of the prison, significantly expanded the accusations the United States has leveled at President Bashar al-Assad of Syria, with some officials appearing to draw a parallel to Nazi Germany.

“The attempt to cover up mass murders in the Assad crematorium is reminiscent of the 20th century’s worst offenses against humanity,” said Nikki R. Haley, the American ambassador to the United Nations. 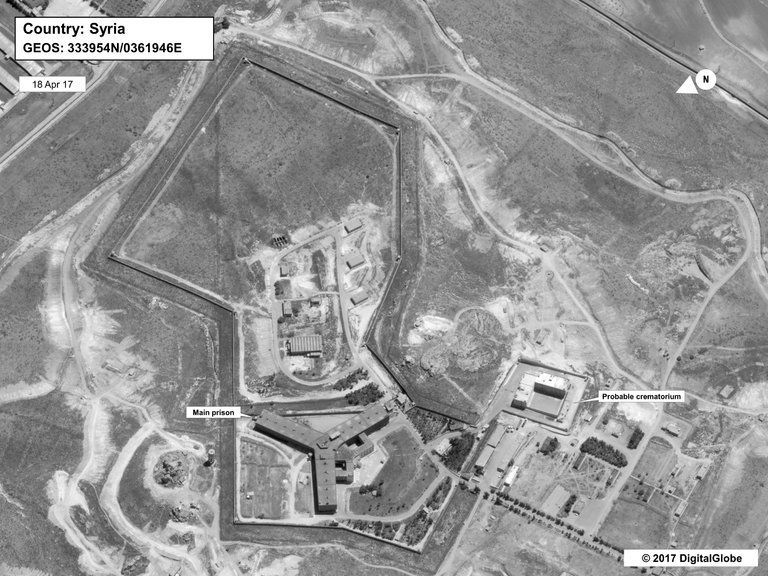 A satellite image of what the State Department described as a building in a Syrian prison complex that was modified to support a crematory.

Mr. Assad’s forces and their allies have been widely accused by human rights groups and others of killing thousands of prisoners and burying their bodies in mass graves during the course of the war, now in its seventh year.

But the Trump administration went further on Monday, contending that the government was systematically incinerating the corpses of executed inmates at the Sednaya prison complex north of Damascus to destroy evidence that could be used to prosecute war crimes.

“We now believe that the Syrian regime has installed a crematorium in the Sednaya prison complex, which could dispose of detainees’ remains with little evidence,” Stuart E. Jones, the acting assistant secretary of state for Near Eastern affairs, said at a news conference in Washington. “At this point, we are talking about this evidence and bringing it forward to the international community, which we hope will put pressure on the regime to change its behavior.”

Mr. Jones acknowledged that the satellite photographs, taken over the last four years, were not definitive. But in one from 2015, he said, the buildings were covered in snow — except for one, suggesting a significant internal heat source. “That would be consistent with a crematorium,” he said. 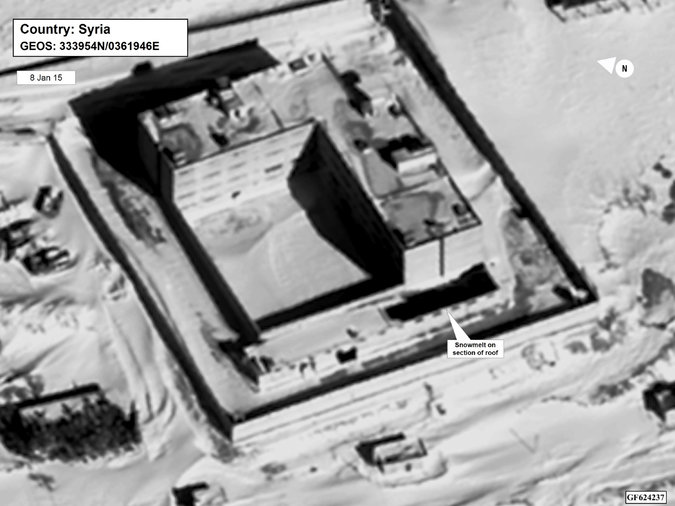 The suspected crematory at the Sednaya Prison complex outside Damascus.CreditU.S. State Department and DigitalGlobe

Officials added that a discharge stack and architectural elements thought to be a firewall and air intake were also suggestive of a place to burn bodies.

The United Nations is scheduled to begin another round of Syria peace talks in Geneva on Tuesday, and the timing of the accusations seemed intended to pressure Russia, Mr. Assad’s principal foreign ally, into backing away from him.

“The rest of the world recognizes the horrors of the Syrian regime,” Ms. Haley said. “It is time for Russia to join us.”

There was no immediate comment from the Russian or Syrian governments. Mr. Assad has repeatedly denied committing crimes in the war, which he has framed as a struggle against terrorism fomented by his Western and Arab enemies.

Human rights groups said they were surprised by the Trump administration’s assertions, in part because some of the satellite photographs have existed for years and are not conclusive.

“There still needs to be a lot of research done,” said Geoffrey Mock, a Middle East specialist at Amnesty International, which released a report in February detailing other evidence of mass executions at the Sednaya prison, but nothing about a crematory.

Paulo Pinheiro, the chairman of a United Nations tribunal that has been compiling evidence of atrocities in the Syrian war since it began in 2011, said in an email, “I don’t have any information concerning this crematorium.”

Some Syrian opposition supporters asked why, if the United States had satellite pictures suggesting the existence of the facility for such a long time, they were being publicized only now. Some criticized the Obama administration for sitting on the pictures.

Mr. Jones, the acting assistant secretary of state, said American officials believed the crematory was created in 2013. “Although the regime’s many atrocities are well documented, we believe that the building of a crematorium is an effort to cover up the extent of mass murders taking place in Sednaya prison,” he said.

Momentum is building in several court cases being prepared in Europe against Syrian officials. Witnesses testified this month in German federal court in a criminal case that accuses six senior Syrian security officers of responsibility for atrocities.

Throughout the conflict, which has killed roughly 400,000 people, many witnesses have accused pro-government forces of burning or destroying bodies, though not specifically at Sednaya.

At least a half-dozen Syrians have told The New York Times over the past four years that they either witnessed the burning of bodies or smelled odors that made them wonder if bodies were being burned. Several mentioned an unpleasant smell like burning hair near prison or military facilities, or in areas recently taken by pro-government forces.

Several former detainees on the Mezze air base, a government facility on the edge of Damascus, said they had seen bodies being burned. People living nearby said they had smelled something like burning hair but were unsure whether it was from animals, like chicken feathers or sheep’s wool.

Jamal, who was displaced from a Damascus suburb and gave only his first name for fear of reprisals, said that while living in the Mezze district several years ago, he regularly saw black smoke and smelled what he thought were burning tires, in addition to other smells he could not identify. 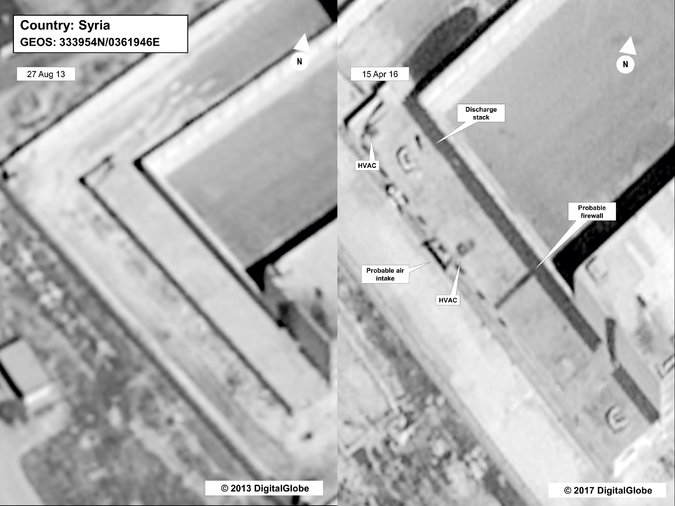 Photographs from 2013 and 2016 showing what is thought to be a crematory at the Syrian prison.CreditU.S. State Department and DigitalGlobe

Kassem Eid, a former rebel spokesman and negotiator in the rebel-held Damascus suburb of Moadhamiyeh who is now based in Germany, also said that people living in Damascus suburbs had noticed a smell like burning hair.

On Al Jazeera television in 2015, a defecting soldier who served on the Mezze air base said detainees’ bodies had been taken to a crematory in the Harasta neighborhood.

In April 2013, a middle-aged Syrian told The New York Times that bodies had been burned after an attack on a civilian area outside Damascus. He said that after pro-government militias entered his neighborhood and killed scores of people, he watched from his window as the troops burned bodies while dancing around.

He said he had seen 20 to 30 soldiers in military uniforms burning bodies, including those of townspeople he recognized.

Many other instances of ad hoc burnings of bodies have been reported over the years. A lawyer in Aleppo described seeing two bodies thrown out of a security office. When he and his friends returned a few days later to bury them, he said, they were stopped by security officers who burned the bodies in the street.

The bodies of infants were found half-charred in 2013 after pro-government forces massacred scores of people in the towns of Bayda and Baniyas.

During the news conference on Monday, Mr. Jones acknowledged that the United States had not yet given the satellite images to the Russians.