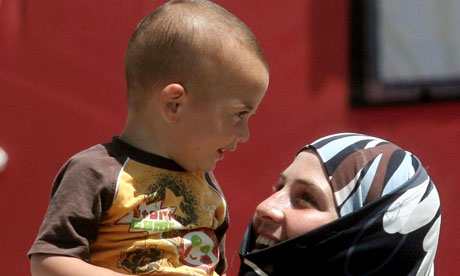 A Syrian refugee and child in Turkey

Protesters in Britain have claimed that agents of the Assad regime have threatened them and their families in Syria.
Photograph: Adem Altan/AFP/Getty Claims that Syrians involved in anti-government protests in the UK have been threatened and intimidated by agents of the Assad regime have prompted discussions between Scotland Yard and Foreign Office officials.
Syrians who have protested in London say they have received phone calls and visits to their homes, while members of their families in Syria have been threatened.
One man described how the country’s secret police had visited his parents’ home warning them to stop him taking part in any further demonstrations after he was photographed outside the embassy in London. Another said he had been warned not to mix with the demonstrators by a Syrian official after a protest this month.
The demonstrators say that although the embassy does not have the power to arrest expatriates, the regime can attempt to control their behaviour by intimidating and detaining their relatives, or threatening to arrest them if they return to Syria.
The Foreign Office said it had been made aware of claims that Syria’s embassy has photographed protesters, and that those images have been shown to their families in Syria in an attempt to harass them.
« We are looking into these reports and discussing them with the police. We urge anyone who’s been the subject of any intimidation to report it to the police, » said a Foreign Office spokesman.
The Syrian embassy denied the claims, insisting it served the entire Syrian community, irrespective of an individual’s political beliefs or actions. But a friend of three people whose families have been persecuted said that they were « extremely frightened » and were deciding whether to press ahead with their claims against the Syrian regime.
« It has to be understood that this is extremely serious for these people and their families, » said the London-based activist, who did not want to be named for fear of reprisals. « They are worried about what has happened and the publicity around them and what that could mean for their families. They are considering carefully what to do next. »
A spokesman for the Metropolitan police said it had no knowledge of any complaint being made against the Syrian embassy, but added it was aware of the allegations. The Foreign Office urged any of those who felt they had been intimidated or threatened to come forward.
« Any such action [by the Syrian embassy] would be wholly wrong and unacceptable, » said a spokesman. « We’ve taken action in the past against diplomats whose activities were inappropriate and contrary to the interests of the UK, and we would do so again. »
Since the start of the Arab spring a number of regimes have been accused of intimidating their UK-based citizens. In April the Foreign Office condemned the Bahrain government when students on scholarships in Britain had their funding withdrawn after attending anti-government protests. The students said the regime had put intense pressure on their families after they were photographed attending a peaceful protest in Manchester in solidarity with the country’s pro-democracy movement.They said they feared their relatives could suffer beatings and torture as a result of the Bahrain government’s crackdown and that they were likely to be arrested upon their return.
In May the UK expelled two Libyan diplomats over allegations they were operating against UK-based demonstrators opposed to Muammar Gaddafi. The Foreign Office refused to comment on the behaviour which led to the expulsion of the diplomats and their dependants, but it was widely reported that they are suspected of seeking to intimidate pro-opposition Libyans.