Syrian National Council: ‘We have one condition – there is no future for Assad’

MEE sits down with Nagham al-Ghadri, vice president of the Syrian National Coalition, in Beirut.

Nagham al-Ghadri joined the Syrian opposition movement shortly after protests against Syrian President Bashar al-Assad broke out and then escalated. Spurred on by the so-called Arab Spring, and a desire to bring change to her country, Ghadri became a part of the Coordination Committee of Latakia, one of the local opposition organs.

Originally from a leftist family in the coastal city of Latakia, the computer science graduate said her family had to hide its ideology due to the fear of being arrested. Her family left for Kuwait in 1972 and the last time Nagham visited her home in Syria was 2010.

“My mother passed away alone, her five children couldn’t even go to the funeral,” she told MEE. 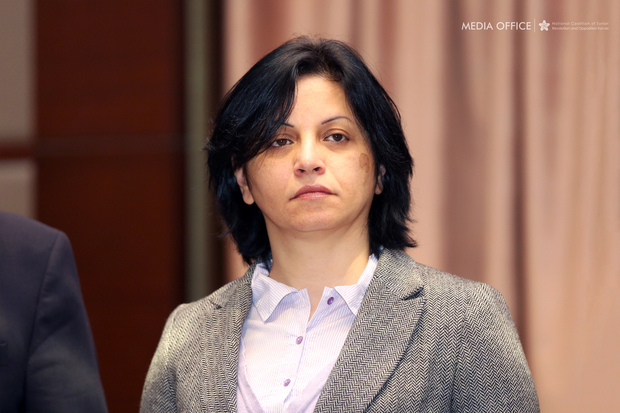 Latakia is the coastal region which has always been one of the strongholds for the Assad government and is where Russia has decided to install its military bases. An activist for human and political rights in Syria, she was elected last January as the vice-president of the Syrian National Coalition, the umbrella organisation that coordinates the different groups and political parties opposed to the government.

MEE sat down with her in Beirut this week to find out what the future has in store.

MEE: Russia bombed some areas of Syria on Tuesday for the first time. What is the response of the Syrian National Coalition (SNC)?

NG: We consider these attacks an invasion of Syria. Russia bombed the countryside of Hama and Homs, and there is no Islamic State [group presence] in these areas. Fighting IS doesn’t mean killing civilians and helping the regime against the Syrian Free Army [at least 37 civilians were killed according to opposition groups, although Russia denies this].

We also consider that the reaction from other countries [US and European states] is a negative one. Those countries know for sure the Russians are helping the regime, and not attacking IS.

MEE: What do you think of the approach between the states you named and Russia?

NG: They knew that the Russian government had been sending weapons and equipment to the regime since the beginning of the revolution. And they were also aware that six or seven months ago, Russia started to send fighters and soldiers even if they deny it. We know for sure that in certain areas in Syria – like Latakia, Tartous, Damascus or Hama – there are Russian soldiers and fighters over there. Some of them are in the mountains of Latakia.

MEE: How do you interpret messages from some European leaders (like German Chancellor Angela Merkel) who have said they need to talk with Assad to fight the Islamic State (IS)?

NG: To negotiate with Bashar al-Assad would be the same as negotiating with IS. Many of the IS leaders were jailed in Syrian prisons but released right after the first demonstrations [of March 2011]. It is not possible to negotiate with someone as extreme as IS. He is not the right person that will help to eliminate IS.

MEE: The president of Iran Hassan Rouhani said his country is ready to open “a new chapter” with the world. Would you see Iran negotiating for a solution in Syria?

NG: From the beginning, Iran’s interest has been to see al-Assad remaining as [president]. They have mentioned several [times that] he has the right to be the president. But Iran is part of the problem, so if they want to sit with the Americans, they have to know that the Syrians will never ever accept an Assad state. According to this, we might think that this statement is positive if Iran is ready to meet accepting there is no future for Assad in Syria.

Otherwise, it is useless to talk with Iran about anything in Syria.

MEE: And what does Saudi Arabia and Qatar, very influential within the SNC, think about the latest developments?

NG: They still have a say inside the SNC, but they have never been involved physically in Syria. They continue to support us and the situation hasn’t changed. Everybody heard the speeches of those countries at the General Assembly of the UN.

MEE: What are the bases for the SNC to sit down and negotiate with the government?

NG: We think that Geneva I [an action group initiated by the UN peace envoy to allow negotiations] is the base: there has to be a transitional governing body (TGB) and no Assad at all. It clearly says that there will be no president and a TGB with executive powers. But unfortunately, Iran, Russia and other countries have different opinions about the exact meaning of the TGB.

Nowadays, Staffan De Mistura [UN special envoy to Syria] is trying to dig around Geneva I, and we told him we won’t accept that: we either support Geneva I or there will be no negotiations with the regime. We have one condition: there is no future for al-Assad. The whole world should understand that. For any other solution, we are ready to sit at the table to negotiate about it. But not with Assad.

MEE: The TGB could include any member of the government but al-Assad?

NG: People could be in the TGB if accepted by both sides. The opposition and the regime will sit together and negotiate about the names to agree on all the people that will be in the TGB. Of course, we will not have the people that killed the Syrians. We cannot say yes to them.

MEE: Why hasn’t the SNC had a stronger presence during the international discussions about Syria?

NG: As a coalition we cannot force anybody to negotiate or to sit at the table to talk. But the positive thing is no one said no, everybody – political parties, armed groups, civil activists – are willing to sit and talk about different issues. The most important thing is to have a serious plan for a political solution. We are organising our movement together.

MEE: But many have expressed doubts about the capacity of the SNC, whose members are based outside Syria, to influence armed groups fighting inside the country.

NG: Now we have a good relationship with them and we have had a long meeting with Zahran Alloush [military leader of Jaysh al-Islam, the largest military opposition group], and we still have links with the political committee.

MEE: Can Jabhat al-Nusra [Al-Qaeda’s branch in Syria] be your ally?

If it is in the best interest for Syrians and Syria to sit with al-Nusra to negotiate on how to stop the violence and find a solution, sure we will do so.  The whole world is asking us to sit with the regime. The regime is killing us, killing Syrians. Al Nusra is not killing Syrians, they are attacking the regime.

Later on, if we set up the transitional governing body, we have to sit with all the groups that are involved in Syria for peace. Al-Nusra is one of those groups who stand next to the Syrians to fight the regime. Of course we will sit with them to talk about peace in Syria.