Syrian Soldier Is Guilty of War Crime, a First in the 6-Year Conflict – by Anne Barnard

BEIRUT, Lebanon — For the first time, six years into a war that began with Syria’s secret police accused of torturing teenagers and has escalated in brutality ever since, a member of the Syrian military has been convicted of a war crime.

The perpetrator: a low-level soldier who is now in Sweden as a refugee. The crime: violating human dignity by posing with his boot on a corpse. The sentence: eight months in a Swedish prison.

Anticlimactic? At first glance, yes, for those who want Syria’s president, Bashar al-Assad, and other senior officials tried for far more serious crimes like using chemical weapons, bombing hospitals, and detaining and torturing tens of thousands of people.

Yet the ruling, issued last week in Sweden, is a landmark event, legal experts and human rights advocates say, the first conviction in any court of anyone from the Syrian government’s side for crimes committed in the multisided war.

It offers a glimmer of hope that courts outside Syria can hold at least some war criminals accountable on all sides of a conflict that has claimed nearly half a million lives, even now that Mr. Assad is looking more and more likely to stay in power.

As hopes fade for a political transition that could bring a full reckoning inside the country, Syrian and international advocates say there is new urgency to the search for other avenues to document and punish war crimes. In that context, they said, even this small victory is promising.

“Thank you for justice,” Rami Hamido, a lawyer who fled to Sweden from Syria and helped prosecutors build the case, said he told the judge after the ruling.

The conviction also provides a test case for how social media documentation — a voluminous portion of the available record of suspected war crimes in Syria — can and cannot be used as evidence in court.

The soldier, Mohammad Abdullah, 32, arrived three years ago in Sweden, where other Syrian refugees spotted him through his Facebook posts. They connected him to a photograph he had posted earlier, showing him standing over a pile of bloody bodies, smiling, with his boot on one corpse.

At first, the prosecutor, Henrik Attorps, charged him with killing the people shown in the picture, but the court ruled that the picture did not prove he was the killer. So Mr. Attorps brought a second case, charging Mr. Abdullah with violating the dead man’s dignity.

“There is an international duty to act on these crimes,” Mr. Attorps said in a telephone interview. “Sweden should not be a safe haven for war criminals.”

The decision came just months after a setback for similar prosecution efforts in Spain. In July, a court there threw out a case that accused senior Syrian officials of war crimes in the death of a man whose sister spotted his corpse among photos of torture victims after a defector smuggled the images out of Syrian government prisons. A Spanish court had claimed jurisdiction in the case because the man’s sister was a Spanish citizen, but a higher panel rejected that argument.

Prosecutors in Sweden and Germany have made more progress using the same legal principle, called universal jurisdiction. It holds that national courts can have jurisdiction over certain war crimes that take place outside their territory.

While Sweden focuses on cases that have a Swedish connection — a suspect, victim or witness in Sweden — Germany allows cases based on pure universal jurisdiction, with no national link required.

Both countries have convicted several fighters from the Islamic State and Syrian rebel groups, which advocates say is a step toward accountability. But without efforts to prosecute those on the government side, it risks giving the impression that the European authorities are concerned only with suspected Islamic State members who could pose a terrorist threat, which could discourage potential witnesses.

That such small steps are counted as victories is an indication of the difficulty of prosecution. Russia, the Syrian government’s most powerful backer, has used its United Nations Security Council veto to block attempts by the United States and its allies to refer Syrian war crimes suspects to the International Criminal Court.

And there are challenges even in the countries making the most efforts, Human Rights Watch reported. The group called for Sweden to expand its prosecution staff and conduct more outreach in Arabic to let refugees know they can file complaints, and noted that in Germany the authorities are struggling to sift through thousands of tips.

Both countries are also carrying out broader investigations intended to document suspected crimes by Syria’s military and prison systems, information that is not linked to specific cases but could provide context in some future, higher-level prosecution.

As for the individual cases, Salma Kahale, a Syrian activist who works with families of torture and detention victims, said, “For now, I see this as mainly symbolic, a continuation of our cry in the wilderness.”

Haid Haid, a Syrian analyst and author of a recent report on transitional justice efforts for the German research institute Heinrich Böll Stiftung, said advocates must readjust their goals and expectations given the political climate.

The main value of the narrow, low-level cases in Europe, he said, is “the message it sends to both victims and their families and to regime officials that war criminals will not be able to get away with what they did, at least in Europe.”

He said the prosecutions could also serve a political purpose. They could make it more difficult, he said, for Western countries to normalize relations with the Syrian government without at least trying to impose conditions such as releasing detainees and providing information on detainees who have disappeared.

But at the same time, he said, it is important for the prosecutions themselves to avoid politicization that could harm their credibility. 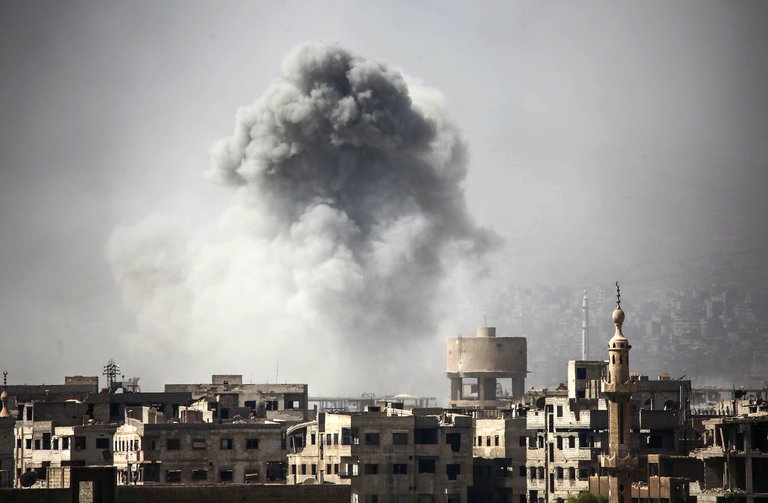 Smoke billowed from buildings after a reported air strike in the eastern Ghouta area, near Damascus, Syria, on Monday. For the first time since the conflict began, a member of the Syrian military has been convicted of a war crime.