In the aftermath of a deadly bombing in Damascus on Thursday, a man emerged from a small knot of bystanders crowded around a camera crew from Syrian state television to vent his anger at the foreign Islamist fighters he held responsible. “We the Syrian people,” he said, “place the blame on the Nusra Front, the Takfiri oppressors and armed Wahhabi terrorists from Saudi Arabia that are armed and trained in Turkey.”

Pointing at the ruined street near the headquarters of President Bashar al-Assad’s ruling Baath Party, the man described the location as “a civilian place — a mosque, an elementary school, the homes of local families.”

Watching a copy of the report online, Rime Allaf, a Syrian writer monitoring the conflict from Vienna, noticed that this man on the street, whose views so closely echoed those of the Syrian government, had a very familiar face. That is because, as opposition activists demonstrated last year, the same man had already appeared at least 18 times in the forefront or background of such reports since the start of the uprising. 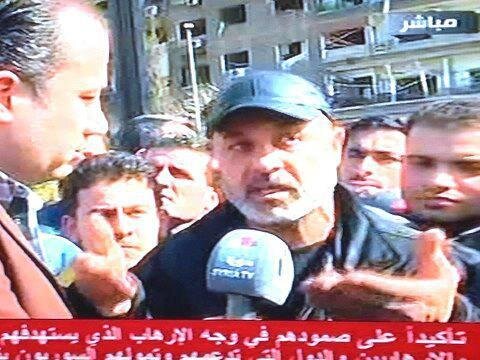 After she posted a screenshot of the man’s latest appearance on Thursday, Ms. Allaf observed on Twitter that “it would be funny if there weren’t so many victims of Syria regime terrorism!”

As The Lede noted last July, the man was even featured in two more reports the same day, attending a small pro-Assad rally in Damascus.

Mocking the dark comedy of government-run channels recycling the same die-hard Assad supporter in so many reports, activists put together several video compilations of his appearances in the state media. The most comprehensive, posted online last June, featured excerpts from 18 reports (including two from international broadcasters).

Another highlight reel, uploaded to YouTube 13 months ago by a government critic, showed that after the man had spoken at least five times on state-run television, he appeared in the background of a BBC report wearing a military uniform.

As longtime readers of The Lede may recall, during the dispute over Iran’s 2009 presidential election, opposition bloggers noticed that one particularly die-hard supporter of Mahmoud Ahmadinejad also appeared again and again and again in photographs of pro-government rallies.

While there is no way to determine just who is responsible for Syrian television’s frequent interviews with this same man on the street, there is some evidence that Iran has advised Syria on how to report bombings on state television.

Last year, when The Guardian published a trove of hacked e-mails taken from the in-boxes of Syrian officials, one message forwarded to the president appeared to include advice from Iranian state television’s bureau chief in Damascus on what his Syrian counterparts should report after bombings. That e-mail, from Hussein Mortada, a Lebanese journalist who runs coverage of Syria for the Iranian government’s satellite news channels, complained that the government was not heeding directions he had received “from Iran and Hezbollah,” the Lebanese militant group, about who Syria should blame for bomb attacks. “It is not in our interest to say that Al Qaeda is behind” every bombing, Mr. Mortada wrote, “because such statements clear the U.S. administration and the Syrian opposition of any responsibility.”

Friday, 2:28 p.m. Update: As a reader of The Lede pointed out on Twitter after this post was published, Syrian activists noticed that the frequent bystander had also appeared at the very start of a graphic video clip recorded just after the bomb attack in Damascus on Thursday. In the first few seconds of that clip, which was copied from a pro-Assad Facebook page by opposition activists, the bearded man appeared to be directing a group of men in civilian dress who rushed to a car to help a badly wounded victim of the bombing to an ambulance.