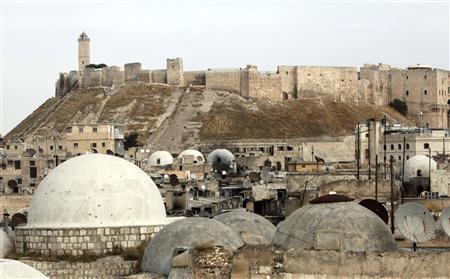 (Reuters) – Syrian museums have locked away thousands of ancient treasures to protect them from looting and violence but one of humanity’s greatest cultural heritages remains in grave peril, the archaeologist charged with their protection said.

Aleppo’s medieval covered market has already been gutted by fires which also ripped through the city’s Umayyad mosque. Illegal excavations have threatened tombs in the desert town of Palmyra and the Bronze Age settlement of Ebla, and Interpol is hunting a 2,700-year-old statue taken from the city of Hama.

In a country which also boasts stunning Crusader castles, Roman ruins and a history stretching back through the great empires of the Middle East to the dawn of human civilisation, the task of safeguarding that heritage from modern conflict is a daunting responsibility.

Maamoun Abdulkarim, head of Syria’s antiquities and museums, says it is a battle for the nation’s very existence.

« We emptied Syria’s museums. They are in effect empty halls, with the exception of large pieces that are difficult to move, » Abdulkarim told Reuters during a visit to neighbouring Jordan.

Tens of thousands of artefacts spanning 10,000 years of history were removed to specialist warehouses to avoid a repeat of the storming of Baghdad’s museum by looters a decade ago, in the wake of the U.S. invasion and overthrow of Iraqi President Saddam Hussein, he said.

Syria’s own 23-month-old conflict is tearing the country apart and has raised international concerns over the fate of one of the richest and most diverse historical collections of any single nation.

The UN cultural body UNESCO says it is concerned for the fate of six World Heritage sites including the old cities of Damascus, Aleppo and Bosra and the imposing Crusader castle, Crac des Chevaliers.

Many have become battlegrounds between rebels taking cover among ruins and troops who shell indiscriminately, the damage recorded in relentless video images of the fighting.

If looters ever got their hands on the museum treasures, that would mark the final demise of Syria, Abdulkarim said.

« If they reach these places then my conviction is that Syria would no longer exist… It would signal the end of the end, » said the 46-year-old French-educated archaeology professor who took over as Syria’s Director General of Antiquities and Museums six months ago. « Syria as we know it would then be over. »

Numerous Bronze Age civilisations left successive marks on Syria including Babylonians, Assyrians, and Hittites. They in turn were replaced by Greeks, Sassanians, Persians, Romans and Arabs, many choosing Syrian cities for their capitals.

European Crusaders left impressive castles and the Ottoman Empire also made its mark over five centuries.

Abdulkarim said the most significant pieces to go missing since the start of the conflict were a gilt bronze statue from around 2,000 years ago that was stolen from the city of Hama – and placed on Interpol’s ‘Most Wanted’ list of art works a year ago – and a marble piece looted from the garden of Apamea museum.

But priceless artefacts in the northern town of Maarat al-Noman were saved when the local community ensured the museum’s famous mosaic portals were kept safe during fierce clashes.

In Hama, local neighbourhood youths protected the museum’s Roman and Byzantine statues from looters until they were taken to safety, Abdulkarim said. « They closed the doors of the museum and were able to protect it from disaster. »

Dozens of archaeological sites have been targeted by illegal excavation and trafficking, though they account for less than one percent of the 10,000 sites across the country, he said.

The diggers concentrate mainly on sites which have long been the focus of illicit trafficking, such as the ancient city of Apamea, north of Hama, that flourished during Roman and Byzantine periods, and is famous for its 1,850-metre colonnade.

« Vandalism in the city is an old phenomenon and is not related to the crisis, but the thieves who are active in this area have found greater freedom to operate during this crisis, » Abdulkarim said.

Abdulkarim appealed to the warring parties to spare the country’s many Crusader castles, some of which have been in the thick of the conflict and even been converted into army barracks or rebel hideouts.

Crac des Chevaliers, the supreme example of Crusader castle building, has suffered minor damage while Aleppo citadel’s main gate was sightly damaged along with its northern tower, he said.

The greatest damage has been to a collection of seven old markets in Aleppo, unsurpassed in the Middle East, that were gutted by fire that also damaged the city’s Great Umayyad Mosque, Abdulkarim said.

« We have lost the seven souks completely, forever, » he said, although the continued fighting had prevented any mission from assessing the full extent of the structural damage.

In northeastern Syria, major ancient sites in Tell Mozan near Qazmishli were well protected by Kurdish groups that have taken control in the region, Abdulkarim said.

U.S. historian Giorgio Buccellati, who has worked at Tell Mozan and checks photos of the site daily on the Internet, told Reuters there had been « absolutely no looting » there.

In southern Syria, army shelling had damaged some ancient homes but not the ruin of Bosra, which contains one of the best preserved Roman theatres and a major monument, Abdulkarim said. His comments were confirmed by a refugee who spoke to Reuters this week after fleeing the town.

« The army had shelled the old quarter where rebels had dug in and there has been damage to an old church, » Abdullah Zubi said after crossing into Jordan. But the Roman theatre, in an army-controlled sector, suffered no damage although army troops are dug in nearby, he said.

The ruins of what may be the world’s first city, a mound near the Syrian-Iraqi border town called Tell Brak, have so far been spared, while illegal excavation of unexplored tombs in the ancient desert city of Palmyra had halted, Abdulkarim said.

In some cases those illegal digs stopped simply because thieves failed to locate any treasures, as happened at the Bronze Age site at Ebla after they dug holes in an ancient courtyard at the royal palace.

More than 4,000 items, including beads, coins, statues and mosaic panels, were turned over by Syrian customs last year to Abdulkarim’s department, although nearly a third of those turned out to be counterfeit.

The department is also working with UNESCO and Interpol to track down 18 mosaic panels smuggled to Lebanon.

Combined losses so far remained just a modest fraction of Syria’s priceless collection, Abdulkarim said, but added that protracted and escalating violence could usher in anarchy and more brazen theft.

« So far the gangs and thieves are small scale operators and no organised international gangs have surfaced, » he said. « But what could be terrifying is that column heads and columns and large stones could be stolen…and smuggled out of Syria. »

« If this happens, God forbid, then we are approaching the start of the tragic demolition of our past and future. » (Editing by Dominic Evans and Sonya Hepinstall)