Syrian Women and the Uprising: Fighting on Multiple Fronts

Article  •  Publié sur Souria Houria le 4 avril 2015
In Syria, women were at the core of the peaceful protests since the beginning of the uprising, in March 2011. From renowned opposition figures like Suheir Atassi and activists Marwa al-Ghamian and Razan Zaitouneh, to artists such as Fadwa Suleiman, May Scaf, Kefah Deeb, and Rima Fleihan, women have been instrumental to the civil disobedience movement since its earlier stages. The message was clear: men and women, hand in hand against tyranny.
In addition to the general struggle for human rights and social justice, the Syrian uprising was the framework for the questioning of a patriarchal society in which religion has been used to keep women under control.
Despite the shared goals of protesters, conflicting views between the secular and religious approaches emerged very early into the uprising. While some opposition activists wanted to break all taboos and question the patriarchal system as a whole, others focused on the regime while remaining committed to more traditional and conservative values. 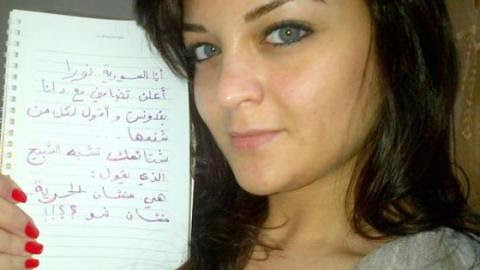 Syrian activist Noura shows her support to the Uprising of Women in the Arab World. Source: the Uprising´s facebook page
As part of the struggle for equality, many Syrian women joined the Uprising of Women in the Arab World, a free secular space for dialogue about women’s rights in the Arab world that welcomes women from all religions and backgrounds: Arabs, Berbers, Nubians, Kurds, Assyrians, Arameans, Syriacs, Armenians, Turks, Turkmen, Circassian… Syrian women joined the initiative under a powerful motto: “To overthrow the repressive regime on the one hand, the oppressive religious and social power structures on the other”.
Among the many comments on the Uprising’s site, we found Batoul‘s wish: “To become the President of Syria, this is why I support the Uprising of Arab Women,” and Lamar’s powerful insight: “I do not make a distinction between the Syrian revolution and women‘s revolution, to me they are the same.” 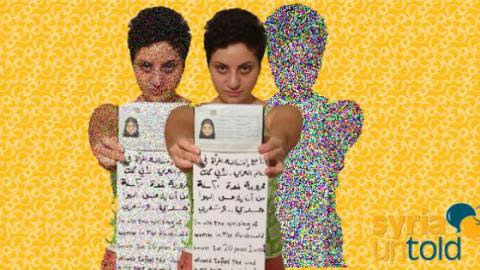 Syrian activist Dana Bakdounis exercises her right not to wear a hijab. Source: The Uprising of Women in the Arab World´s facebook page.
Some of the comments point at the issue of traditional clothing and the Islamic veil / headscarf. “I support the uprising of women and do not want intellectuals to look at my hijab as a symbol of backwardness,” an activist wrote. “I stand with women’s rights and everyone’s right to choose. My personal choice is to wear the Islamic veil, and I do not want to be judged for it.”
Other activists made an association between clothing and restrictions on women‘s freedom. “For 20 years, I was deprived of feeling the air touch my body and my hair,” a young woman wrote, next to a photo of herself without a headscarf, holding her passport, in which she was wearing the hijab.
According to some, the time for this kind of discussions has yet to come, a recurrent argument in the history of revolutions against oppression in the region (From Algeria to Iran, women actively participated in the struggles against oppressive rulers, only to find themselves pushed into the background as soon as those were overthrown).
“Now is the time to talk about women‘s rights,” an activist assured. The Syrian regime is the product of a society that nurtured it. We do not only want to get rid of the regime, but also of its nurturer.”
With the evolution of the popular uprising into a militarized conflict in which several external forces have intervened, women’s rights, and human rights as a whole, have clashed with newly found enemies. Extremist groups such as the Islamic State of Iraq and Syria (ISIS) pose increasing threats to the diversity and co-existence characteristic of the Syrian context, including restrictions on women’s movements and self-expression. From Raqqa teacherSouad Nofal to renowned activist Razan Zaitouneh, of Syria´s Violations Documentation Center, many have stood against these groups which are trying to impose their own extremist agendas on Syrians, paying a heavy price for it. 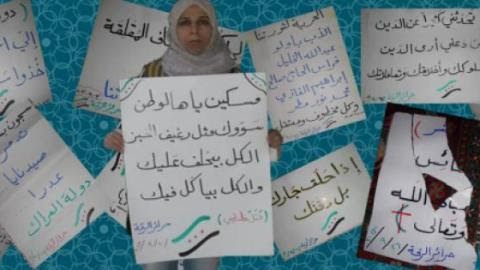 Raqqa activist Suad Nofal with her one-woman demonstration´s banners. Used with permission.
“We did not take to the streets against Assad to be scared of these ones now!” was the motto repeated by many during popular demonstrations against the impositions of Al-Qaeda groups in the country.
In the words of Razan Ghazzaoui, while male activists are able to enter liberated or disputed areas, women face all kind of restrictions. “Opposition checkpoints´s main task was to ask unveiled Syrian women what they are doing here, in their own country. ‘Are you really a journalist?’ they would ask. And the person sitting next to them would have to vouch for them in order to pass the checkpoint.”
“All the revolutionary women who are going into Syria to see how they can help are having to take extra precautions and security measures to protect themselves from all kinds of dangers,” she denounced. “And this is all because they don’t have a penis. That’s it. And when it comes to those male, secular or otherwise, activists who enter and leave the country as they will, none of them has raised a finger or condemned these obstacles that are being put in the face of their, supposedly, partners in the revolution.”
Representation of women within the political opposition leaves much to be desired as well. With a large majority of men doing the decision-making, the few women involved in the process are but pure decoration within a male-dominated scenario. In the words of Khawla Dunia, “women are like spices for men in the political opposition. They use us to add some flavor, but we do not affect the main ingredients. I refuse to take part in this cooking, as long as I am not considered an active participant.” 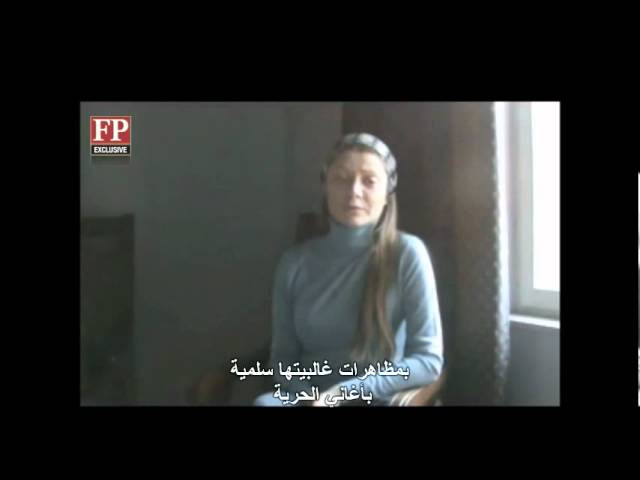 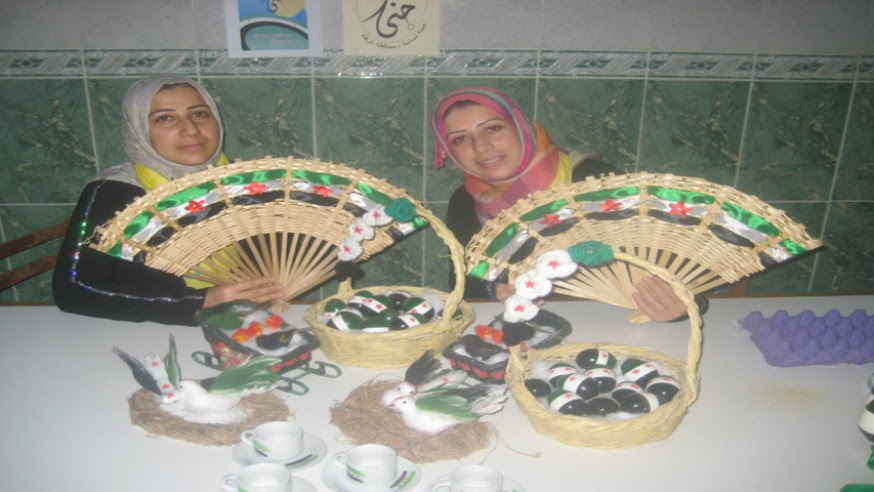 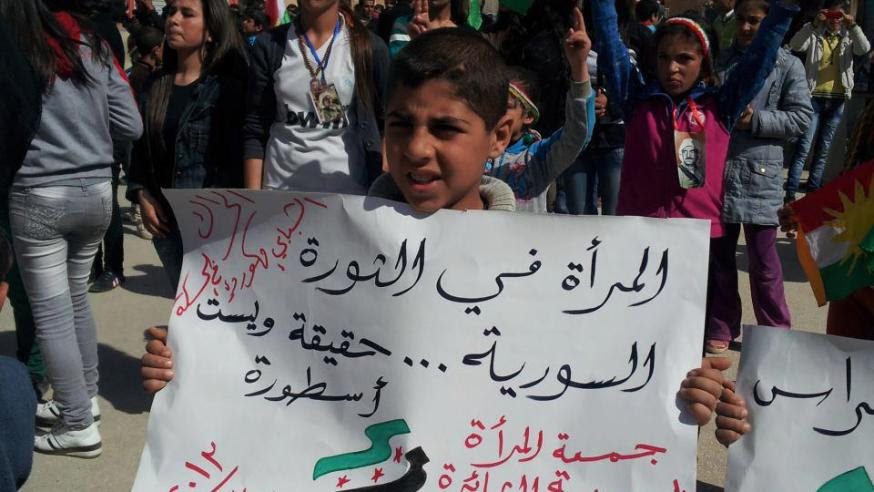 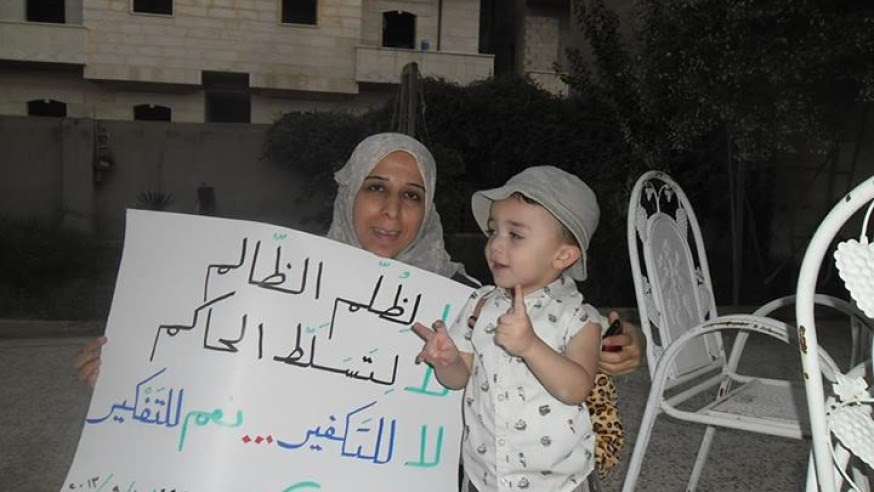 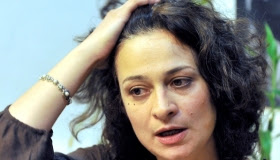 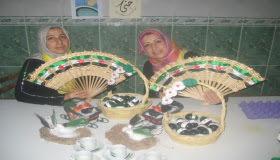 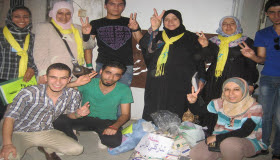 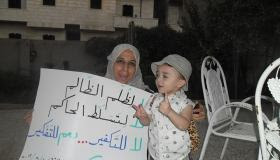 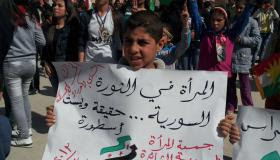