Syrian novelist Samar Yazbek was born into a wealthy Alawite family, but became ‘a traitor to her kind’ to fight the Assad regime. Her latest work is a visceral, nightmarish account of the revolution that drove her into exile 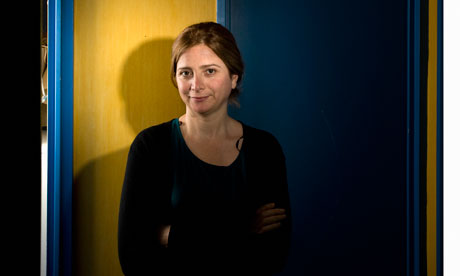 To get to Samar Yazbek’s flat in an area of Paris she would prefer remained unnamed, a guest needs three codes: for a metal gate around the building, an outer door and an inner door. Eventually, sensing my bafflement with this final hurdle – she is guiding me in by mobile phone, her English fails her, and I do not understand Arabic – she comes down to rescue me. Her handshake is warm, her gaze long and direct, an unabashed moment of examination.

It is a wary way for a novelist to behave, but then she is an unusual sort of novelist, and her latest book is not a novel. A Woman in the Crossfire is a diary, a feverish, nightmarish, immediate account of four months in the middle of last year, which she spent demonstrating against the Assad regime in Syria, until the threats and intimidation made it impossible. She then moved with her daughter from flat to flat, never quite ahead of the security forces, who detained her five times. She interviewed protesters, doctors, neighbours and defectors about what was happening in the streets, prisons and hospitals of her country, what they saw and what was done to them, often finding that after they had talked to her, they disappeared. She never pretends that she is being heroic, although her persistence sometimes feels foolhardy. This week the book was awarded the PEN Pinter Prize, given annually to a British writer who, as Harold Pinter put it in his Nobel speech, casts an « unflinching, unswerving » gaze upon the world (this year, Carol Ann Duffy), and shared with an international writer who has been persecuted for speaking out about their beliefs. It is drenched in fear and grief. She chain-smokes, weeps and screams through it, and cannot sleep without tranquillisers.

How has it been received in the Middle East? Yazbek has enough English to understand my questions. She nods, and begins to speak in Arabic, making forceful eye contact, willing me to understand, before turning to the translator. The book is samizdat in Syria, which has not stopped the government denouncing her as immoral and it as full of lies, and for some Syrian intellectuals to agree with them and follow suit. But in other areas, she says, it has been gratefully received, as an eyewitness account of what really happened at the beginning of the uprising.

« I want to smoke, if you don’t mind, » says Yazbek, lighting up. Tawny eyes look out from between sheets of tawny hair, the bright gaze and pointed face of a fox. There is one bedroom, which has gone to her 18-year-old daughter. Yazbek sleeps behind a screen in the corner of the living room.

Yazbek comes from an Alawite family that used to be among the grandest and wealthiest on the Syrian coast. She also has, she points out wryly in her book, a familial link to Osama bin Laden – a relative of her mother’s was his first wife. President Assad is an Alawite too, but, « it was one of the achievements of Assad that the big, rich families of the Alawite clan either worked with him or became middle-class ». Which is not to say that her family opposed him: she will not give any details about them – not the number of her siblings, nor what her parents do, because she doesn’t want to put them in any more danger than she already has.

It was an ordinary life, very protected, not particularly cultured, loving and affectionate. But she was a rebellious child, and from very early on could not understand why she should have different life expectations from her brothers. She says that Syrian women have the best conditions in the Middle East after Tunisia. But « it seemed that when Hafez al-Assad was president he was accomplishing reforms, but in reality, in profound ways, it was getting worse, going backward. » And things did not improve under his son, Bashar.

« The real revolution will begin after the fall of Assad, » she says. « Then we will have a feminist revolution to construct a new life, a new education, build a new society. » But aren’t you afraid of unintended consequences? Of the influx of Islamists, or of mirroring Egypt and Libya? « If we are afraid of the religious impact, we need to work from now to help in the revolution, to be able, after, to rebuild. »

When she was 16, she ran away. « I wanted to be liberated, I always felt caught … like all teenagers, you know? » she says in English. « But I actually did it. And it’s horrible in our society – it’s a shame for the family, for the girl – many people want to kill their daughters. Everyone thought I wanted to be with a man, but it’s not true – I wanted to be alone, I wanted to make my own future, I wanted to be a writer. » Again, she doesn’t want to talk much about it, because « I feel sorry about my family, and I feel guilty, because I have always made trouble for them ». Her novels, which speak of women’s lives, or Alawite families and their cosy relationship with the military, which are unashamedly erotic and deal with lesbian relationships, were bad enough from their point of view. But since her involvement in the uprising, when she was officially branded a traitor to her own kind, and leaflets were distributed in the streets encouraging her annihilation, no one speaks to her family. « They think my brothers are not men because they didn’t kill me. » She writes in her book how one of these brothers contemplated suicide, so great was the shame. « A woman like me, » she writes drily, « makes life difficult. »

They took her back, but when she was 19 she ran away again. She lived alone for a short while, then married in a civil ceremony, moved to Cyprus and had a baby. The entrance phone rings, on cue: « That’s my daughter now. » After four years, she left her husband and moved, with her two-year-old, to Damascus.

« Bonjour! » Having to flee interrupted her schooling, so her daughter is learning French and will tackle the baccalaureate in six months’ time. She is tall, confident, watchful, and seems to be enjoying the international nature of her Parisian school. But in the book her mother describes how every Friday last year she locked the doors of their flat and wept, begging her mother to stay home instead of demonstrating: « Don’t go! I know where you’re going! ». They bicker and bicker, they curl up together on a bed, and cry themselves to sleep; an hour later Yazbek wakes to pace and smoke. She gets daily threatening phone calls; this regime takes her position personally.

All her daughter’s classmates in her Damascus school stopped speaking to her. They wrote terrible things on her Facebook page, and she had to leave everything she loved behind. « Yeah, I’m proud of her, » she says of her mother. « But I think, me, I have another mind. I’m not like her. I don’t like to have a lot of problems just for revolution. You could have a calm life. I was happy without a revolution. »

One Friday, back in Syria, a man came to see Yazbek and told her to flee because she was on a hit list of Alawite figures. Her daughter « turned yellow, went to her room and slammed the door ». Later that day she demanded that her mother go on TV and proclaim her loyalty to the president, which she refused to do. It was when Yazbek was detained for the third time and threats were made against her daughter that she decided she had to leave. « For the first time, » she writes, « I put my daughter first. »

Damascus had been hard. At first, before Yazbek’s novels were published, and before she became well known as a TV presenter, documentary-maker and journalist, she lived in one room just outside the city, working in admin for 12 hours a day, keeping herself and her daughter just above the poverty line, refusing family connections because she didn’t want to owe them anything.

It was then that she began to carry a flick-knife to defend herself, which came in handy last year, when security forces came to her home, blindfolded her and took her to a commanding officer in a place she did not recognise. He grabbed her wrists so tightly they burned, she writes, and hit her so hard she fell to the ground and stayed there. The third time he hit her, she took out the knife and he backed away, but it did not stop him from demanding she recant and fall into line with her kind. Two men took her on a tour of the cells, as a warning: she saw three young men, « their hands hanging from metal clamps, and the tips of their toes barely touching the ground ». They pushed her forward, and one raised his head. « There was a blank space where his nose should be, no lips. » More cells, a young man with his back split open, bodies stacked behind bodies, terrible sounds, terrible sights, terrible smells.

« It’s a revolution of the poor against the rich, but as they began killing people and got increasingly cruel, more people are joining the rebellion, » she says. It doesn’t matter that she is from a privileged background, and has little in common with many of those fighting. « It’s a problem of conscience. It’s not a problem of Sunni, Shiite or anything else. »

She reiterates this later. « It’s not a sectarian war. It’s a revolution. The regime makes it a sectarian crime between the people. It’s not true.

« There is a big risk, now, for the revolution – they are confronting much more repression. It’s dividing the societies in Syria and the opposition is becoming much more cruel. »

Is she losing hope of establishing the structures of civil society? « I don’t think all hope is gone. I think there are many in Syrian society who are working to keep the civil institutions. We are at a very risky point … I’m afraid that if the world doesn’t help the Syrian people now, and help to make the regime fall, Syria will be in great danger. If we get rid of Assad today, not tomorrow, it would help us to build the country normally.

« That is my hope and also my fear, because Assad takes strength from Iran, from Russia and from the non-reaction of Europeans and Americans. There is a complicity with Assad in the west, even if it’s not official, or said, or clear. But they are helping him to stay. And that is very dangerous for the Syrian people. »

Yazbek had to get her ex-husband’s permission to take her daughter away to France. At first she felt guilt, and a deep betrayal of herself. « Leaving Syria, » she writes, « means death and nothing else. It means shedding my skin, casting away my heart, everything I ever wanted to do. » But as the months have worn on, she has found purpose in helping from abroad, in occasionally smuggling herself back into the country, in trying to keep doing what she believes in, while, as she puts it in her book, « letting my daughter walk her own path ».