The Syrian war will permanently damage a generation if the mental health needs of children are not immediately addressed, writes Save the Children’s regional advocacy, media and communications director Misty Buswell.

AMMAN, JORDAN – The physical scars of nearly six years of war are evident on Syria’s countless shattered buildings and bodies. However, the mental toll of brutal violence on children is harder to fathom. Some children show outward symptoms, like losing the ability to speak, wetting themselves or screaming at loud noises. But suffering is subtler for many others, like night terrors or showing withdrawal or aggression during the day. What is indisputable is that there is a mental health crisis among Syrian children.

We are at a tipping point. If we don’t act fast to end the causes of toxic stress for Syria’s children and help them to rebuild their lives, an entire generation will grow into broken adults. At least 3 million Syrian children under the age of six have only known war, and millions more have spent their childhood living in conflict. Many have lost critical time for development, and the long-term damage has the potential to become irreversible and permanent.

The prevailing framework addressing children’s mental health in conflict focuses almost exclusively on post-traumatic stress disorder (PTSD), despite the reality that, for Syrian children, there is no “post.” It is essential to shift the focus to the toll that six years of “toxic stress” has had on Syrian children. Toxic stress is the “most dangerous form of stress response” that children experience when exposed to strong, frequent, and/or prolonged adversity … without adequate adult support,” according to the Center on the Developing Child at Harvard University.

Experiences during our earliest years can have a permanent impact on the architecture of the developing brain. Continuous toxic stress response affects children’s mental and physical health, including their cognitive, socioemotional and physical development. It disrupts the development of the brain and other organs, and increases the risk of stress-related diseases, heart disease, diabetes, immune system problems, substance abuse, depression and other mental health disorders into adulthood.

Experiencing situations of extreme trauma, as so many children in Syria do, and continuous toxic stress can also reduce neural connections in areas of the brain dedicated to learning and reasoning, affecting children’s abilities to perform academically and beyond.

These consequences are not inevitable. Supportive relationships with caring adults early on and professional support can help reverse the damaging and potentially deadly effects of toxic stress. However, Syria’s child mental health crisis comes amid the collapse of traditional and official support structures. Parents and marriages are cracking under the strain of war, and trained professionals have fled the country in droves. One in four children interviewed said they rarely or never have a place to turn if they are upset or sad.

At the very least, children need an end to the main cause of their toxic stress: the relentless violence that continues to rain down on Syria with impunity, despite the nationwide ceasefire that was announced in December. According to the Save the Children report, nearly all children interviewed said that the ongoing bombing and shelling, including the threatening and constant sound of warplanes overhead, is their main cause of psychological stress. Half of these children said they never or rarely feel safe at school, and 40 percent don’t feel safe playing outside, even right outside their own home. Nearly all adults interviewed said children are becoming more fearful and nervous as the war goes on.

In the face of such horror, many throw their hands in the air and say the Syrian conflict is too brutal and complicated to tackle. But these new findings must be a rallying call to end the violence. There can be no end to Syrian children’s mental anguish without ending the war. In April, world powers will convene in Brussels for what E.U. High Representative Federica Mogherini described as potentially “the moment for the international community together to turn the page and start the political transition, the reconciliation process and the reconstruction of Syria.”

World powers can and must use this moment to demand an end to the targeting of schools, hospitals and children. They must send a strong message to the various warring parties that they can no longer target civilians with impunity, and that perpetrators of children’s rights violations will be brought to justice. World powers should also make a new global commitment to support children’s mental health and well-being in emergencies, recognizing the real risk of long-term damage on an entire generation of children in Syria. They must give children the proper support, including funding for mental health and psychosocial humanitarian programming, and ensure that this issue becomes a core programmatic intervention in humanitarian emergencies.

Today, there are no “safe zones” in Syria for what remains of childhood, but as we mark the sixth anniversary of the conflict next week, we must take the steps to build a better and safer future for this generation of children. 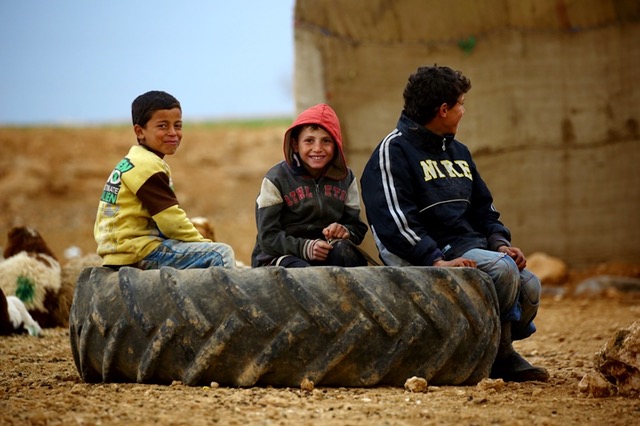 Displaced Syrian children, who fled their hometowns due to clashes between regime forces and ISIS, sit on a wheel outside a tent in Kharufiyah, near Manbij, earlier this month.AFP/DELIL SOULEIMAN